While this year ended on an amazing high, we almost didn't get there - several times. See, Taran has been plagued by one thing or another, and as a result I ate a lot of omeprazole and drank a lot of wine.

After our second-level debut in April, I noticed that he was a bit foot sore. It's been an on-off problem since fall of 2016, as he has flat feet and his right front toe has a tendency to run forward. I had tried glue-on shoes a few times, which he did great in, but he didn't seem to be able to keep them on for more than two weeks. I had my vet out to consult and take radiographs, and we were shocked to find that he had only 4.5 mm of sole depth. I opted to have the hospital farrier out (he made Brego's ginormous shoes) and we put a set of plain shoes on his front feet, with rim pads.

The first week in shoes was terrifying. Normally Taran never slips or trips, but in steel shoes he did both constantly. It was like he didn't know where his feet were. It was nice not to have to boot him to go for trail rides, but other than that, I lived in constant fear that he'd slip and rip a tendon himself, or get his shoe stuck in a haynet, or rip his shoe off and half his foot with it. Those of you have shod horses probably have nightmares about your horse losing a shoe... apparently I have nightmares when my horse is wearing shoes!

But Taran managed not to kill himself, and he was definitely more comfortable in shoes, so I felt like we'd made the right decision.  I put him on Reithoof, a hoof supplement with tons of biotin in it, to hopefully help him grow out some sole (it did). Things were back to normal, so I signed us up for another show in Houston over Memorial Day weekend. And then the week before the show, T started being ever so slightly off on the RF - and it got worse as the days went by. In a panic, I cancelled the show and called my vet for advice. 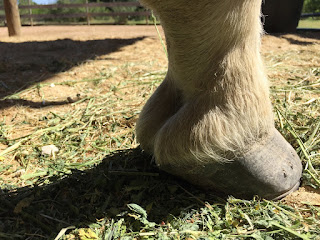 Shod RF, slightly swollen in the heel and pastern. Pass the omeprazole plz.

Long-time blog readers will remember that Taran stepped on a nail back in 2011, and it went through the navicular bursae and the coffin joint. During rehab, we struggled to keep his toe on that foot short enough so that it didn't put any stress on the damaged joints, and ended up having to reset the hospital plate that covered the surgical site every 4 weeks. My vet looked back at her records, and I looked back at the blog, and T was at exactly 4 weeks when the RF started giving him trouble this time. Bingo. We pulled the shoe, trimmed his toe WAY back, and presto - he was comfortable again.

Unfortunately, T doesn't grow enough foot to have steel shoes reset every 4 weeks, so we simply couldn't keep doing that. We decided to try glue-ons again, this time with a new glue, a couple of wraps of hoof cast over it for extra staying power, and bell boots 24/7. And that seemed to do the trick.

By now, we were into the heat of summer, and the spring show season was over. We focused on strength and fitness, and making him a really solid 2nd level horse. T even went to stay with my trainer while I was gone for 2 weeks, and came back very judgmental of my riding skills. The only thing was, for a horse working at the level he was, he didn't seem to have very much muscle or topline. He also seemed to struggle with the heat more than usual, and his overall fitness level seemed to be decreasing rather than increasing. I also noticed that he was chewing a bit oddly, so on a hunch I had the vet back out to look in his mouth. And guess what - broken tooth. It was so broken the vet literally just reached in an plucked out the broken chunk. Poor Taran! After a week of care he seemed to be eating better, so I figured we had averted another crisis. 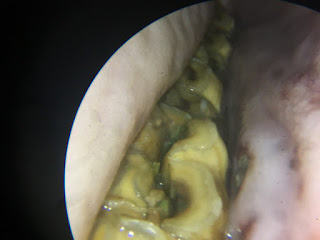 Broken molar is in the foreground... 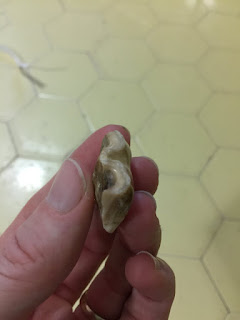 ... and here's the piece the vet pulled out.

But despite having his tooth fixed, he never really wanted to eat his Senior feed. I started giving him alfalfa to supplement, which he seemed to prefer. We did a month-long course of omeprazole since we were concerned that the stress of traveling so much might have resulted in ulcers, but it didn't change his attitude or eating habits. T also seemed to be more and more lethargic. I compared his conformation pics from last year with now, and noticed that he was definitely losing muscle.

Then one morning I came out to feed after a short rainstorm, to find him wet and shivering in the barn - only it was 80 degrees.  I threw a fleece and a blanket on him, then jokingly texted his mum a pic with "You know he's a Texas boy when...". 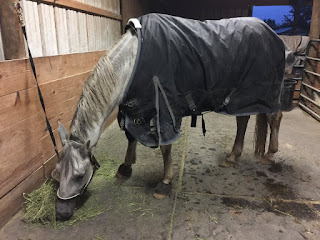 Literally 80 when I took this picture. Not normal.

Still, it was odd. And then he had two very mild colics within 10 days of each other. Once again, I called my vet.

"So I have this long list of weird unrelated things going on with Taran..." I listed them out for her. I'd even sent them in an email since I didn't want to forget anything.

"Ulcers? Hind gut acidosis? Lyme?" I asked. The Internet is a dangerous place if you're an armchair vet looking for a diagnosis.

I laughed. "He's only 15, and he's never had a problem shedding out. There's no way this horse has Cushings!"

A week later, she called me an hour before my first ride at Regionals with the test results. My vet is super optimistic, and I swear you can never tell what kind of news you're going to get from the tone of her voice. 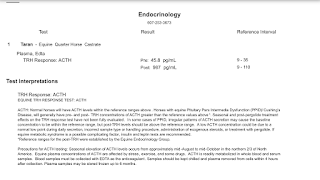 Click to embiggen. My fav part is the "test interpretation" - technical vet speak when what it really should say is GET YOUR HOSS ON PRASCEND STAT.

I sat down hard.

"I've seen numbers that high before... once." She laughed a little.

Mad props to her for figuring that out.  Not in a million years would I have guessed!

So. Wonderpony is now on daily Prascend, and looking better every day. His topline is coming back and so is his fitness and muscling. He acts like a normal horse, although I could do with a little less fire-breathing dragon. We've changed his diet (alfalfa pellets, fat supplement, Platinum Performance, and no more hard feed ever) and most days he's happy to slurp down his "soup". He does get cold REALLY easily (refer to his 400g fill blankie from nationals), so I check the weather forecast like 10 times a day and Taran now has a wardrobe that probably surpasses Valegro's.

My biggest takeaway from the whole PPID experience is to pay close attention to anything weird about your horse. Taran's PPID symptoms were not typical, and he's fairly young. I'm super lucky to have an awesome vet, and I'm glad I have this blog to refer to for past health issues. But I'm hoping that we've figured out the RF and the PPID and can keep him comfortably, sound, and happy. After all, we've got flying changes to work on and third level waiting for us!
Posted by jenj at 8:03 AM