I have a 45-60 minute drive home from the barn after my lesson every morning, and one of the things I've been doing is dictating lesson notes. This helps my brain solidify what I've learned in that lesson, which seems to make things "stick" better. For me it's a cross between visualization and trying to explain to someone what I've been doing, but it seems to help.

I will say that Siri is not the best at deciphering riding terms (for the hundredth time, Siri, it's a HALF PASS not a "half past" and canter instead of "can't her", GEEZ), but at least trying to read them later is entertaining. I've cleaned them up here for easier reading.

8/22
On a circle right, ask for more bend right than you think you need, but be careful to keep your left shoulder back so his left shoulder doesn't pop out. More inside right leg and a little less left leg to encourage him to carry weight on his right hind because that's his weaker one. If you're doing haunches in on the circle, be sure to keep his nose and shoulders pointed on the outside track, otherwise he'll go too much HI because it's so easy to get too much angle in HI to the right. Use outside left thigh to keep the shoulders moving around the circle.

To the left on the circle, use a tiny bit of renvers to keep his right shoulder coming into the right rein Think more shoulder in this direction with a little counter flexion. For canter-walk this direction, really think renvers when asking for the walk, but don't let his haunches swing out so be sure to keep your right leg behind the girth. 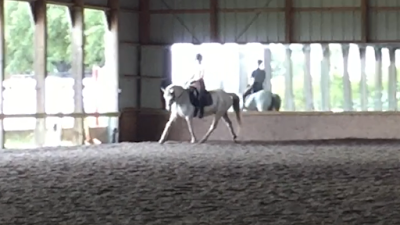 Would you believe I'm actually asking for a touch of counter-flexion here? If I don't, I lose him in the right rein and he falls out on his right shoulder.

When developing half pass from shoulder in, keep your outside shoulder back and your outside leg as well. To the right, allow your left hand to move a bit forward to allow the bend right. But if you start to feel him falling on his right shoulder, ask for a step or two of leg yield and then go back to half pass. You can also do a 10m circle out of HP to get him to stand up in the inside shoulder.

8/23
Because T's right hind is not as strong as the left, I have to ride him differently depending on if I'm going to the left or to the right. For a right canter HP doing 15m circles with haunches in and really working on bending is very helpful to get the feel I need for HP. Coming out of the corner into HP I need to ride HI, then think a touch of SI for a stride or two, then half halt on the left rein and push his haunches over. Inside leg to make sure he doesn't fall right but it's less of a problem to this direction. 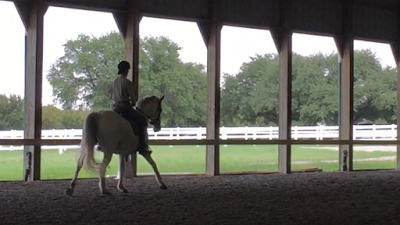 Not enough bend out of the corner whoops.

Flying change work today was great. Going right lead to left, I tend to ride a little backwards and don't have enough power coming into the change. He can save me because he's switching to his stronger lead but it will be half a step late behind. I need to think of riding him forward in a slight renvers as soon as I leave the letter on the long side to come across the short diagonal. If I think about the renvers just before the change, it's already too late because I'm not yet coordinated enough to make it all happen so quickly. From the left to right, I also need to think about forward but it's less of a problem this way. He did a very clean uphill change today this way despite usually being croup high this direction.

8/25
When setting up for canter HP right, think haunches in coming into the corner, all the way through the corner, and then you will actually have enough bend for HP and it starts so easily. Otherwise you won't have the bend you need and it will take too many strides to get organized. Today it was a struggle to go between shoulder is leading and haunches leading in the canter HP, especially to the right.

We had a couple of good changes each way, but the last change from right to left he just wouldn't do it. I finally got it but it wasn't pretty and we were both tired so I was out of the saddle and throwing my shoulders around. Need to work on keeping the canter with enough jump but also enough forward to get the change. When he anticipates the change, he gets really bouncy and disconnected which is hard for me to sit and it just spirals downward from there.

Did a lot of rein back. If he doesn't go backwards immediately when asked, make sure you have your leg on and give him a small tap. Also be sure to wait 3 seconds before asking for RB or else he anticipates and starts backing immediately after the halt. 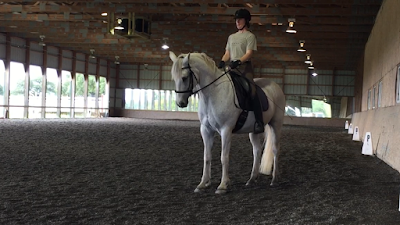 Turns out the key to a good rein back is an uphill, forward-thinking halt - you should feel like you can ask for a canter out of the halt. Who knew.

8/28
More on setting up the canter HP. When going left, think SI in the corner before the HP, then immediately open your left rein and point your hand at the letter you're going to. LOOK AT THE LETTER and make sure his shoulder stay leading. Use the outside thigh to push the shoulders over and keep your outside shoulder back. Also remember to swing your hips! 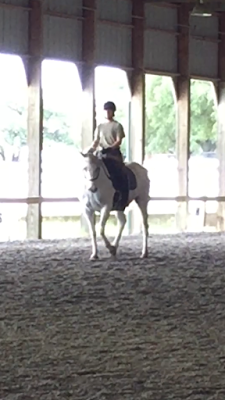 HP left at the walk, and look where my left hand is. This is (one of the many reasons) why he can't get over left - MUST keep that hand down and open.

9/5
I essentially don't ever sit on my left seat bone. Today I worked without stirrups and discovered that I essentially cannot do a renvers tracking right because I can't get my left seat on him enough to make it happen. No wonder we struggle so much going left. To the right, I still want to collapse left and in the mirror it looks like I am torquing my torso left even though my right side is straight. Trainer suggested seeing a PT to help even out some, so I will be looking into that. 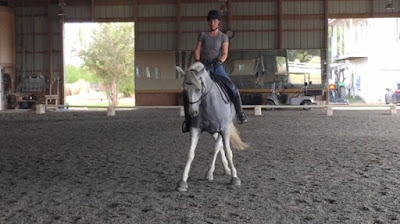 If I collapse any more to the left, I'll probably just fall off.

Do you keep notes on your lessons or rides? Does it help you to look back to solidify the concepts?
Posted by jenj at 7:36 AM