Taran has been barefoot for most of his life, until he stepped on a nail that went through both his coffin joint and navicular bursae, back in 2011. During recovery, he had a hospital plate and then a rocker-toed supportive shoe, but early on after the injury it became apparent that whatever internal damage the nail had done meant that he needed the toe on the damaged foot (his RF) to be kept very short, or he would be off due to the strain on the DDFT.

Fast forward to early 2017 - second level, and we were having some issues with Taran being a bit sore on the fronts under some conditions. My trimmer did what she could, and we tried hoof casts to keep him comfortable, plus loads of biotin supplements. Unfortunately, the casts only last about 10 days under the best conditions, and they're not really a long term solution. I ended up having x-rays done, and we discovered that T only had about 4.5 mm of sole (he should have had 10-12mm). So, we opted to put steel shoes on him for a cycle or two and see if that helped.

At almost exactly 4 weeks in, Taran started short-striding on the right front. We pulled the shoes, shortened his toe, and tried to reset them, but he just doesn't grow enough hoof for four-week resets.  We were forced to go back to barefoot again.

(This was before we figured out that he had Cushings, so if your normally fine barefoot horse suddenly has no sole depth and doesn't grow any hoof, you might want to try to figure out why.) 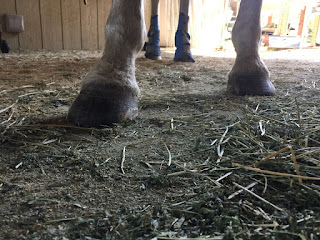 Sept 7 2017 - This was shortly after the metal shoes were pulled. Note how unevenly he's standing, with the RF held out away from his body at an angle. He's clearly not comfortable here. 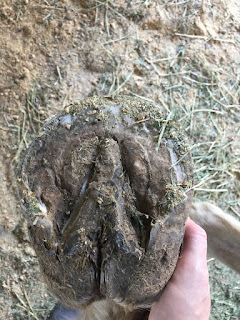 He actually did two shows in early fall 2017 barefoot, while we kept bringing his toe back so the RF would be comfortable again. The problem was, he'd be fine on really good arena footing, but short and choppy everywhere else. We didn't want to put his Easyboot Trail shoes on for serious work, because the extra weight and further-forward breakover point would put additional stress on the DDFT, which we were trying to avoid (they are also not legal for shows because they cover the hairline). But we were also struggling with bruising due to a thin sole. So, we ended up trying EasyShoe Performance glue-ons.

Turns out, these magic shoes basically turn Taran into Fred Astaire. There's nothing on the toe, so the breakover is much further back where he likes it. He was wearing these at Nationals last year and it was the best he'd ever moved (ok, ok, so the super-awesome Otto Sport footing didn't hurt either). 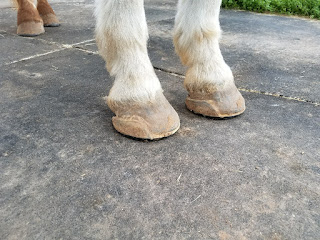 EasyShoe Performance glue-ones, sometime late fall 2017. His toes have run forward here - we were still trying to back them up after the metal shoes. Also notice how straight he's standing, and in all subsequent pics

Uhhhhn-fortunately, because there are only two small cuffs on the sides to glue to, they aren't the best at staying on - even with bell boots on 24/7. So, we tried casting over them: 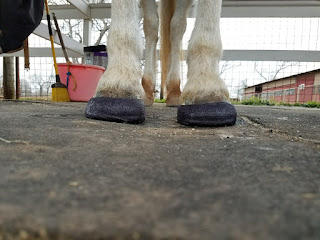 But after one too many resets 10 days apart, we eventually gave up and tried the Easyboot "Love Child". This has a bigger front cuff to glue on: 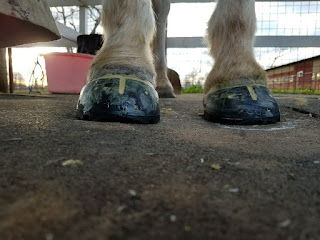 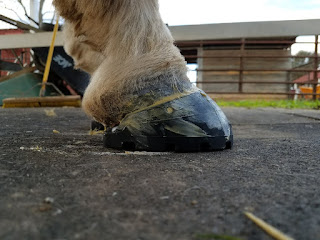 You can see that although it provides more glueing area, it doesn't quite match the angle of his hoof, and it brings the breakover point further forward. Still, using it allowed my trimmer to move his toe back over time and shore up his heel, and we haven't had any problems with soundness this year (knock on wood). 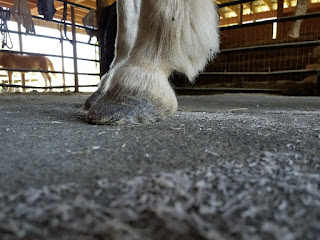 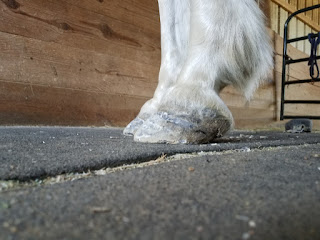 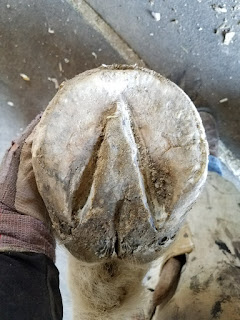 But... Taran just doesn't move as well in these as he does in the Performance shoes. The toe is just a bit too heavy for him, and he feels like he's struggling to get his front feet out of the way. My trimmer tried taking removing most of the toe on the shoe, while still keeping the advantages of having a wider glueing area: 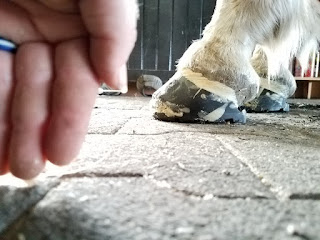 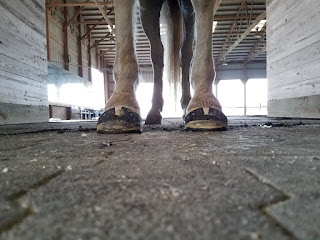 However, removing so much off the front of the shoe changed the integrity of it, so we sort of ended up with flip-flops. Plus, the Love Childs were back-ordered, so we went back to the Performance shoes. 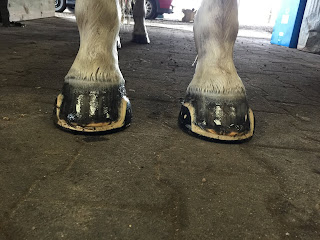 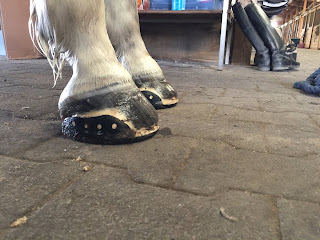 Oct 20 2018 - Note how normal-looking and even the hoof wall is, although you can also see the event line about 1/3 of the way down, where we changed his feed

Taran's whole way of going is different in these - he's light on the front end, yet he's clearly comfortable so uses his shoulder to the fullest extent. It's been a long road, but I think we've finally found the perfect combination for T... even if we do have to reset ever two weeks!
Posted by jenj at 10:09 AM