Taran is two months into his rehab and continues to do fabulously well. He's still on stall rest, except for 2 hand walks per day. We should be able to set up a tiny 12x12 "run" for him just outside his stall sometime this week - we just have to find time to do it!

He continues to have a hospital plate on the injured foot and a regular "supportive" shoe on his other foot. We change out the gauze packing in his foot every 4-5 days, per vet's orders. 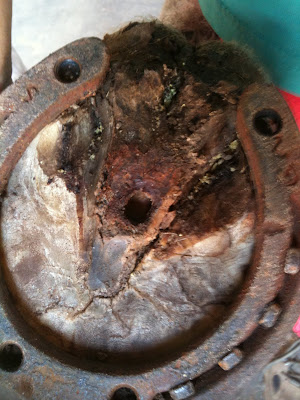 Here's the surgery site. His sole and frog are kinda orange due to the rust on the hospital plate - it's plain steel, not stainless. The holes in his shoe are for the bolts to hold the plate on. 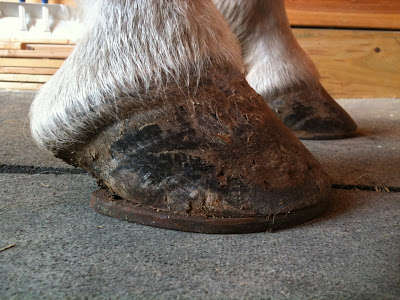 You can see the huuuuge event line where his hoof wall (especially near the heel) has a big indentation. It will be interesting to see how that grows out, but for now it's contributing to his heels being underrun. 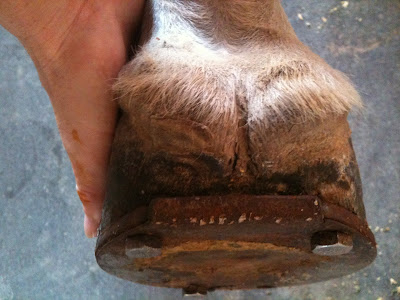 You can see what poor condition his heels are in here - but hey, he's healing well from surgery. One thing at a time!

Several weeks ago, he was starting to be a little short on the injured foot, which the vet diagnosed as DDFT pain. This is not surprising given his long toes and underrun heels, not to mention the fact that the nail may have damaged the DDFT. The farrier moved his shoes back and is working to better support his heel and shorten his toe, and Taran is doing much better now. I suspect this will be an ongoing battle until the hospital plate and shoes come off and we can get more miles on his feet to engage the caudal hoof - but for now, we're working with what we have.

Otherwise, Taran is in good spirits and enjoys daily grooming sessions with Cash and Saga over his stall door. He also makes sure to stop by the water trough as often as possible to go "snorkeling" (this is what we call it when he submerges his face up to his eyeballs in the water. Weird horse).