This morning the vet called me to say that Taran's white blood cell count in the coffin joint synovial fluid was down to 20,000, from 150,000 last night (normal is about 2,000). This was far beyond what she expected! However, although he was responding extremely well to the antibiotic therapy, the vet was concerned that the area would not drain well enough to heal completely. She recommended going ahead with surgery.

Fuzzypony and I talked this early this morning and she agreed that surgery was an option if that was Taran's best chance. I told the vet this decision and that we were a go. So, before he went in, the farrier made him a special hospital plate and put a support shoe on the other foot. Surgery was at noon, and involved debriding the bottom of the foot, flushing the coffin joint and the navicular bursae, and injecting antibiotics directly into the area.

The vet called me at 2 pm to say that the surgery had gone fantastically well. She said that everything looked good, they were able to flush the area really well, and that she was confident it was his best chance. After the surgery, she said that she was "guardedly optimistic" about the outcome. Last night she was really pessimistic about his chances, saying it was "a really bad situation." So Taran is definitely improving! 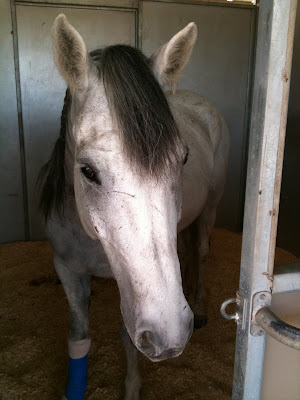 Our handsome patient.
I got to the vet's this afternoon about an hour after he'd gotten out of surgery. Taran looked pretty rough - sweaty from the anesthetic and just sort of disheveled. I started by combing out his entire mane and re-braiding it. As I went along, he stopped sweating and started perking up. About halfway through, he let me know that he wanted his face rubbed, so we did that for a while. That moved to a good (if gentle) currying session, where he made lots of silly faces when I found the itchy spots. Fuzzypony called in the middle of this and I gave her the report, currying with one hand and holding the phone with the other. I told her about his faces of ecstasy and we both had a much-needed laugh. When we got off the phone, I finished up his mane and did his forelock too. He took a couple of drinks of water and pooped, so he was definitely feeling OK. 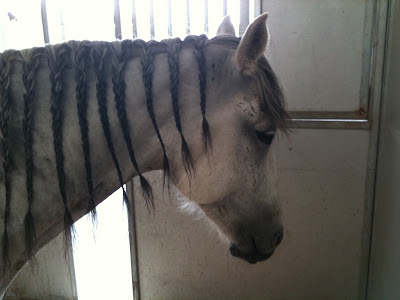 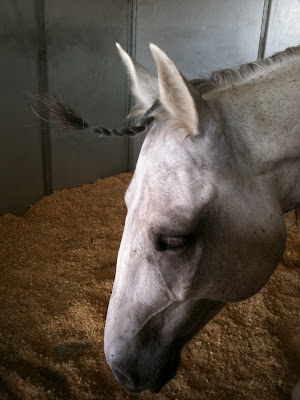 Note the gravity-defying forelock braid. :)
I had three vet techs and two vets stop by while I was with Taran. For all that it's a small hospital, the care is top-notch. I got three calls today with updates, which I know I would not have gotten at a bigger facility. Overall I am very, very positive about how things are going right now. 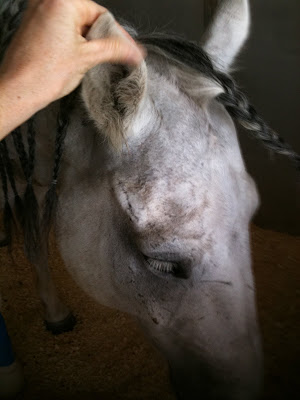 Ear scritches are uber-important!
Of course, the road ahead is long, and Taran is not out of the woods yet. We've got 5 days or so alternating between lavage and the antibiotic treatment. The vet assurred me that she would teach me and Fuzzypony how to clean and pack his foot, and work with the hospital plate. I've dealt with plenty of gaping, bloody wounds before, but I gotta tell you, there is something seriously WRONG with a hole in the bottom of a horse's foot. I am hoping I can cope with it when the time comes. I'm sure I'll suck it up and deal, but still... that's just wrong! 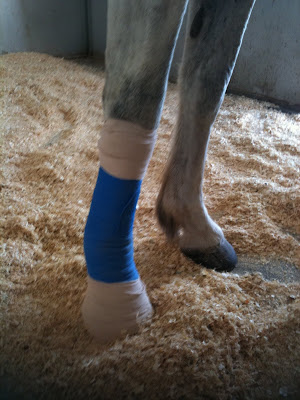 The BEST part - Taran is actually putting weight on the injured foot! Last night he wouldn't even put it down, so this is HUGE!

Thanks everyone for your good thoughts. They seem to be helping!

P.S. Yes, Nic, my husband is out of town. However did you know? I SWEAR I'm never letting him leave again.
Posted by jenj at 7:57 PM