I didn't do much showing in 2019, but I did manage to get both Leo and Griffy to a local schooling show mid-December.

Griffy is sort of a surprise on the dressage scene - I really hadn't ridden him for the last year, since hubby was busy jousting with him. Then Griffy decided he was done with jousting (he never really loved it, then decided he would just rather not) so after many discussions we decided to find him a nice dressage-only home. After all, Leo was my dressage pony and I really cannot campaign two horses (famous last words). We took Griffy to some lessons with the goal of making a sales video, and while riding for the video I did all of 1-3 and most of the second level movements... so I uh, now have two dressage Haffies?

For this show, I rode Griffy in 1-3 and 2-1. Griffy has an odd issue with drag stripes (it's almost like they make him dizzy?), so naturally we were slated to go first after the arena had been dragged. This made for some rather interesting movements, especially our drunk centerlines with our salsa halts. Otherwise the tests weren't too bad, considering I'd been riding him for less than 3 weeks, and he had not shown in 18 months. We certainly need a lot of refinement, and more of everything, but the bones are solid and he tried hard. We scored in the high 60s on both tests, which I felt was super generous, especially in light of quite a few mistakes.

I rode Leo in Training 3 and 1-1, which was kind of a stretch for him as he's going through a growth spurt and his balance is kind of a hot mess. He was SUPER good in warmup - there was construction going on right outside the arena, which made Griffy really anxious, but Leo ignored it completely. The geometry in the tests was pretty questionable in places (losing the shoulders will do that), but overall they were much smoother than our previous attempt when we showed in September. Both tests also earned scores in the high 60s, which I again thought was overly generous. 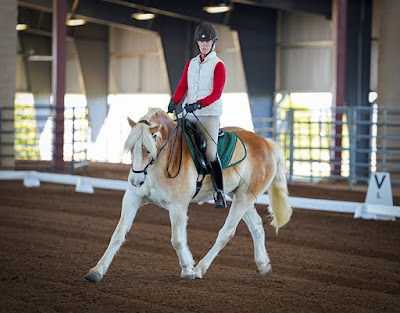 So fancy! Much trot. WTF inside hand?

I absolutely love pics taken after the final halt where riders are petting their ponies. 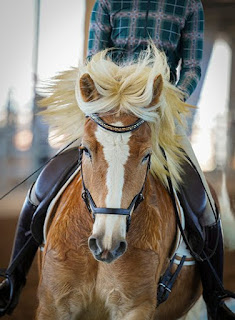 Speaking of hair... Leo is giving his big brother Griffy a run for his shampoo commercial. 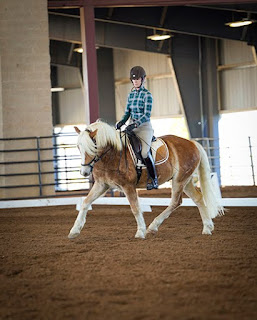 That hind end almost compensates for the escaped shoulder

Massive shout-out to MC for being the #1Haflinger Holder for the entire day - the boys are unfortunately herd-bound enough that she had to stand in the warmup arena holding one whilst I rode and showed the other.
Posted by jenj at 9:29 AM