Why bending left is so hard

Strangely enough, Griffy and Leo both have the same problem: bending left is hard. If I’m completely honest, Taran had exactly the same issue. 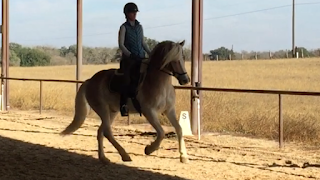 Spoiler alert, it's me.


Compound that with the fact that Griffy’s right hind is his weaker one, and that his right long back muscle is also weaker, and our imbalances complement each other in exactly the wrong way. Leo is more even (ah, to be young!) so his strengths compensate some for my weaknesses, but that's not an excuse for me.

I’ve been focusing a lot on keeping Griffy’s shoulders about 10 degrees to the inside when tracking left, pushing them over with my outside thigh, and holding a tiny bit of counter-flexion. When I do that, he’s actually straight, even though from the saddle it looks like I’m doing shoulder fore. To the right, I’ve been riding a slight haunches in at all gaits, and then taking that shape towards the quarter line and back out again. In the canter especially, this is HARD for both of us, and Griffy would really prefer just to swap leads (he uh, has a clean accidental change from right to left). He’s trying though, and all this body contortion stuff is new to him, so I’ve been pleased with our progress. 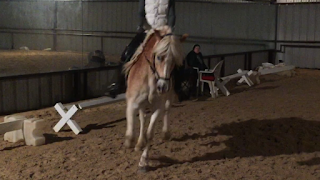 You can see how far his shoulders are to the outside here - and I'm actively trying to ride them in!

I’ve also been very lucky to ride with a biomechanics instructor who has worked extensively with Mary Wanless. On Griffy, I can’t sit on my right seat bone in part because there’s no back muscle underneath me. We talked a little while about how to sort of “suck his back up” into my seat bone, and I have to say the words didn’t really resonate with me. But as we walked to the left, I played around, trying to find ANY increased contact between my seat bone and his back. I finally figured out that a combination of slight counter-flex, nudging inside (left) leg, and lengthening my right side muscles, plus pushing my right hip a bit forward (I naturally sit/stand/exist with it rolled a bit back, I don’t know why) got my seat bone in touch with his back. It was challenging and took a lot of focus to keep the contact, but we both got better over time.

When we switched to going right, it immediately became apparent that “bending” right actually caused his right back muscle to drop out from under me, and I collapsed my right side muscles as well. So much complementary fail there! Pushing my right hip a bit forward while being careful to keep Griffy’s body straight ensured that his back muscle and my seatbone stayed connected. 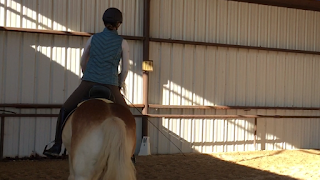 As ever, so much to work on. It’s hard to change habits and body positions, and I find it challenging to focus on one thing without letting all the other things fall apart. At least the boys are patient!

What are you struggling most with biomechanically (for either you or your horse) right now?
Posted by jenj at 10:39 AM