Ok, there is no actual death in this post, with the possible exception of the small spider behind the toilet who may have been crushed during Wednesday night's work. But there was a LOT of destruction.

I should precede the pictures of mass destruction with the news that we have chosen to go with a solar water heater, and as part of the installation package, we will be getting the entire house re-plumbed with PEX. Work starts next Tuesday and should be finished by Friday. YAAAAY! We're finally making real progress!

Of course, the plumber has to have access to all the bathrooms and the kitchen. The pink bathroom is already down to the studs, but we hadn't started demoing the yellow bathroom. The husband will be out of town all next week, so we knew we didn't have much time to do the demo work. So, Wednesday night, we went out and had at it. 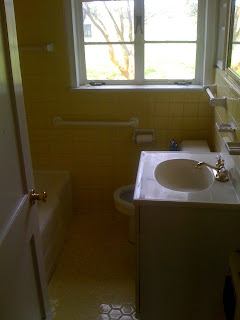 Here's what we started with. 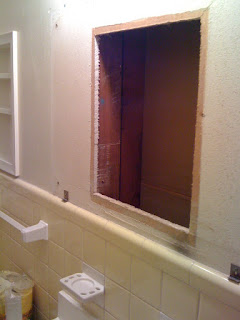 8:00 p.m. Demo begins with taking the mirror of the wall to find... a huge hole in the wall? Eeenteresting. Oh well, less wallboard for us to demo. :) 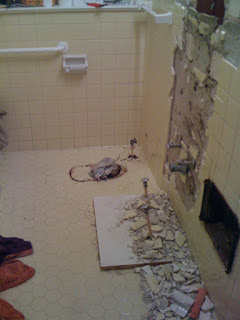 8:20 p.m. We've pulled out the vanity (except the base, which we're going to have to cut out), the toilet, and the electric heater (black box on the right), and capped off the wires. Nice stubby PVC piping for the sink - we'll have to cut these off under the house and cap them. 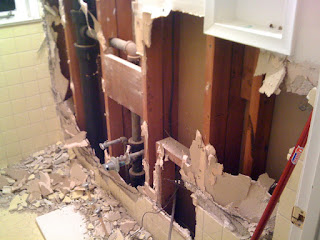 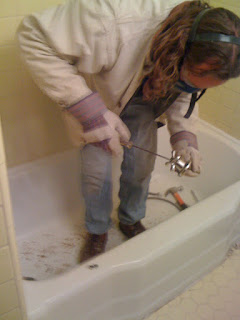 8:40 p.m. The husband starts taking off the fixtures for the shower. Here he's reassembling a handle so we can donate it to Habitat for Humanity. 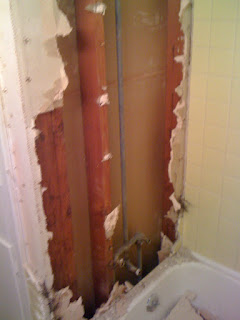 8:45 p.m. The front are of the shower is ripped out. We thought about stopping here since all the pipes the plumber will need are exposed, but decided it was still early and we still had energy, so why not demo the whole thing? 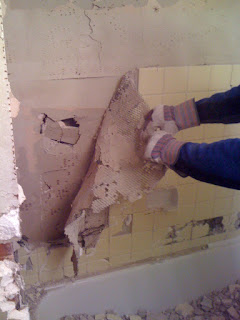 8:50 p.m. Husband demonstrates the "smash tiles then rip entire wall down" technique. I must say, we're getting really good at this. Too bad we're done with this now. 9:15 p.m. Demo is mostly complete - what's left is tearing down the wallboard, carting all the smashed tiles out, and then pulling nails out of the studs. I should mention that the window is painted shut, so we won't just be able to toss the debris out the window. 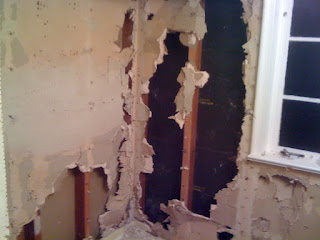 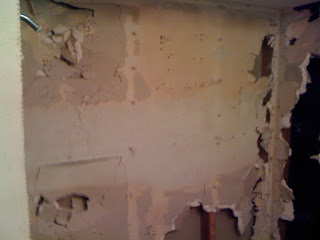 9:15 p.m. The back wall of the shower - no more tile, just wallboard that has to come out. 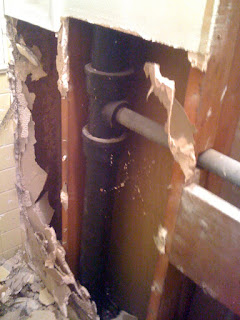 9:15 p.m. A close-up of the giant cast-iron sewer pipe. They must've built the house around it!

This weekend, my job is to clean out all the wallboard, toss all the debris in the truck and haul it to the dump. Did I mention that the husband is out of town? Wish me luck!
Posted by jenj at 8:51 PM