This morning I was up quite early and headed out to the house to get the debris out of the yellow bathroom. I brought Elias along with, and let him sit in the front seat of the car. Ok, his butt was in the seat, but he put his front paws on the floor and his chin on the dash. Quite funny, really: 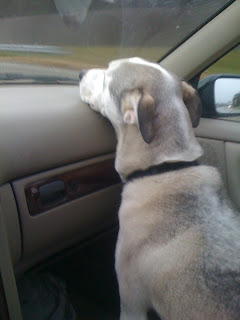 Yes, I took this at a stop light, in case you were wondering!
The day started quite poorly, I must say. I let Elias off leash to have a bit of a run, and run he did - he spotted a deer in the greenbelt to the right of the property, and headed straight for the fenceline - then hopped right over it in a low spot and took off after the deer. I ended up sprinting after him, which was pretty much futile since he is a lot faster than I am. Fortunately, the deer escaped, and then Elias got sidetracked with other fun doggy smells, but ended up running several houses down the road before he decided he had tired of the game and came back to me. You know when you catch your dog and want to yell at him for completely ignoring your calls to come back, but instead you tell him what a good boy he is for returning? Yeah, it was one of those moments. Gah. Anyway, Elias has lost his yard priveleges until we get the invisible fence up and the hot tape on the perimiter fence. I don't want any repeats of this morning!

Next, I had to put the tailgate back on the truck - by myself! Let me just say that that sucker is HEAVY! It was a bit of a struggle but I managed: 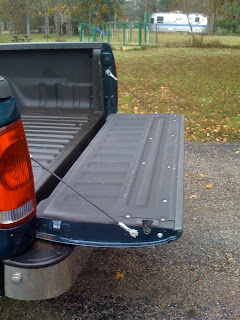 Woohoo! Tailgate on! Now, off to load up tile.

Then I went to start up the truck to pull it around the back of the house... and it wouldn't start. The engine turned over a few times and then quit. Finally, on the fourth try I got it going, then had to decide whether to take it in to a service center and waste my entire morning, or take it around back and load it with tile, then hope it starts next time. I decided to take it around back - I HAD to get the debris out of the bathroom this weekend since the plumber comes on Tuesday. He won't plumb if he can't access the pipes, and the bathroom was ankle-deep in tile bits, cement, and rusted wire mesh. So cleaning that up was the top priority, and to do that I needed the truck. So, I decided that if it doesn't start when I'm done loading tile, I'll borrow FuzzyPony's truck to jump it, and then I'll take it in to get new batteries next weekend since I'm pretty sure that's the problem.

Getting the tile out of the bathroom was somewhat of a challenge. With the pink bathroom, getting smashed tile out was easy - there's a window that opens right into the carport and is in close proximity to where we park the truck. However, the yellow bathroom is at the other end of the house. I didn't want to be carting bins of rubble through the house to the carport, since that would have taken way too much time and made a huge mess. I had considered bringing the truck around the back of the house and parking it right under the yellow bathroom's window, then tossing the debris right into the back of the truck. However, a quick inspection showed that the window, which has the little casement cranks to open it, was painted shut. I tried breaking the paint seal with a boxcutter and failed miserably. It's not just one or two coats of paint holding that window closed, it's probably a half-dozen coats of paint. In fact, I bet that window hasn't opened since 1957! Anyway, I had to scrap the window plan and go for option C - taking the tile out through the back door off the kitchen.

The problem with this route was twofold. First, I had to go through the hallway with the lovely original wood floors, and I didn't want to scratch those up with ground-in bits of tile. So, I had to protect the floors in some way. Oddly enough, I found an old moving quilt in the wellhouse, so I carefully swept the floor of debris and laid the quilt down. 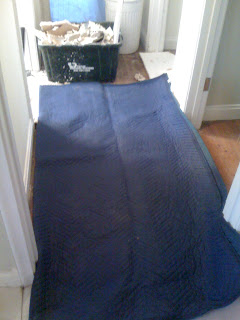 The second problem was actually getting the debris from the bathroom to the truck. The hubby and I have been using a recycling bin (which you can see in the picture of the quilt) to take small loads of tile out, but it generally takes both of us to pick the bin up once it's full of tile bits. Since it was just me today, the only way I could still pick up the bin was if it was only half full, and that didn't seem like a particularly good (or expedient) solution.

As I was walking through the carport, I notice our wheelbarrow sitting there, and thought how great it would be if I could just use that to transport debris instead. Of course, the problem with that is getting the wheelbarrow up into the truck bed - if only I had a ramp! Alas, there were no ramps to be found, or even any boards that would make suitable ramps - except for the old bookcase that the previous owner had left sitting in the carport! I quickly unscrewed the 10 inch wide planks from either side, knocked off the back of the bookcase, put the planks back together... Volia! A ramp! 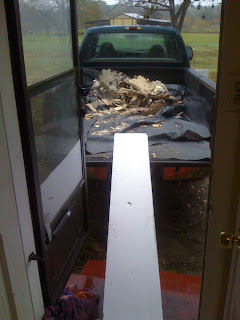 Engineering WIN! Never mind that it looks like it should be on the Epic Kludge list, it WORKED!

Problem solved. It took me about an hour and a half to get the debris out of the bathroom and tear out some of the leftover wallboard. There's still work to be done, but at least I am now confindent that the plumber will actually be able to work in there on Tuesday. I also got a teeny bit of drywall sanded today when I took a break from shoveling debris - still lots more to do on that before I can apply a second coat of mud and smooth everything out. All in good time!
Posted by jenj at 9:31 PM