I swear, my horse is giving me ulcers.

Last night when I came home from work, he was almost non-weight-bearing on the RF. 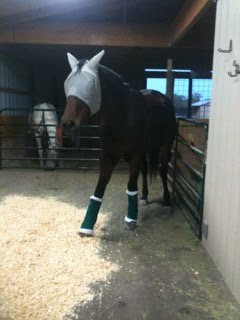 Owie.
I called my vet in tears. She suggested a hot nail from his new $hoe$, and asked me to bring him in. I decided to skip the ER fee and the overnight fee and opted to bring him in this morning. Last night, I set up the temporary stall, wrapped his front legs for support, and gave him 2 grams of bute.

This morning, he came out of his stall looking really quite good - no sign of lameness on the RF. I mean, it's good that he's better, but AAAARGH!

I briefly debated about skipping the vet entirely but decided that since he'd been really REALLY lame on the RF last night, it would be better to have her look at him. So I hauled him in and dropped him off. She'll see him mid-morning... and maybe she'll have some good news.

Anyone care to join me for a cool, tall glass of aloe juice?
Posted by jenj at 8:11 AM