At our lesson this week, I decided to try out the Dr. Cook's bitless bridle that's on loan from Bre over at G is for Greta. I had really wanted to try it on Saga, but it doesn't fit his big lug-head, so we tried it out on Reddums instead. Putting it on required a little creativity on my part and a little cooperation on Red's part (nose goes here), but we got it. It looked quite handsome on him, I must say.

Normally I ride Red in an eggbutt snaffle for hunting, jumping, or dressage, and a mechanical hackamore on the trails or for jousting. When we bought him, he was going in a 7 inch shanked bit (because, you know, he's gaited, and that's a gaited horse bit. Whatevs.) Red stops entirely on your seat, and he's definitely not one to run off with you, so we use as little hardware as possible. However, his hackamore is the most hideous thing ever kind of ugly, so I figured if he would go in the Dr. Cook's bridle, it would be nice. 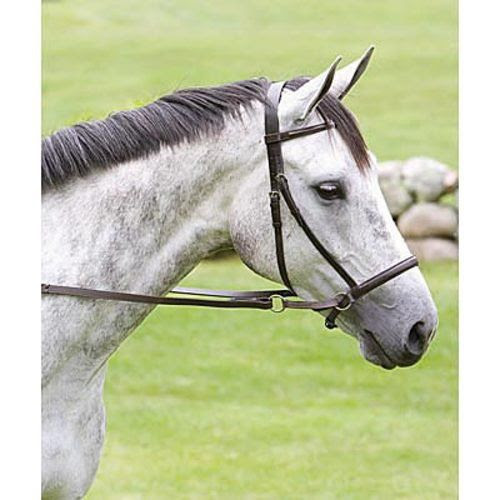 
Pretty much from the start, it was clear it wasn't going to work. Red is usually quite noodly (riding a straight line is more challenging on Red that any other horse I've ever been on), so having quiet hands is a must. With the rings where the reins attach flopping around and thereby putting pressure on his face, his head was all over the place. If I tried to take up enough contact so the reins would stop flopping, he got really tense and gaited, which is his usual response to too much contact. I usually ride him with the absolute lightest contact, so this makes perfect sense. We tried WTC in both directions just to be sure it wasn't a fluke, but poor Reddums just kept getting whacked with the reins. After only 15 minutes, I switched him back to his regular snaffle. Fortunately, Reddums forgave me for trying out the newfangled hardware on him, and went back to being his usual self within a few minutes.

I do think a Dr. Cook's would work well on a horse that is not as sensitive or noodly as Reddums. It's a handsome-looking bridle and I like how it works. So if anyone is looking to purchase a very gently-used Dr. Cook's bridle, contact Bre.

Red promises he didn't slime it or anything.