What have I done? The ugly truth under the shoes

Tonight, when the boys were running around like maniacs, Saga pulled his left front shoe. It's the first time I've seen the bottom of his foot in about three months (bad owner, not here for farrier). 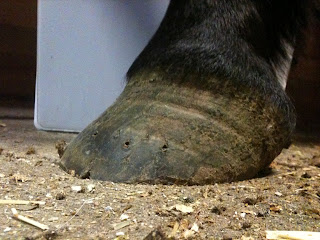 This is his LF today after he pulled his shoe off. At least he didn't manage to rip any hoof wall with it. 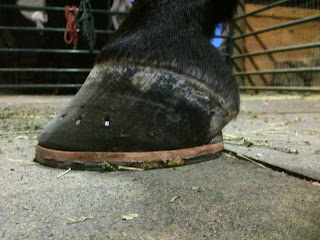 This is his LF in November, the day he got shoes.  See any really frickin' obvious differences?

Despite aggressive rasping of the lower hoof wall, despite remedial farrier work, I swear that from this view his feet look WORSE now than they did five months ago. Yet, Saga is sound now and wasn't then. 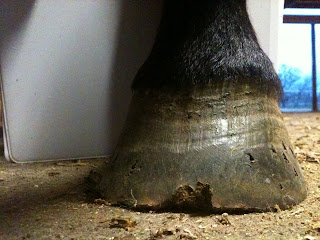 Today. Look at the indent at the top of the hoof where the growth is constricted, the pushed-up quarters, and the impressive flaring on the outside. Oh, and he STILL has event lines, probably from shoeing. 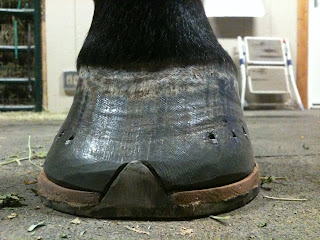 Last November. No flare, no indent at the top. 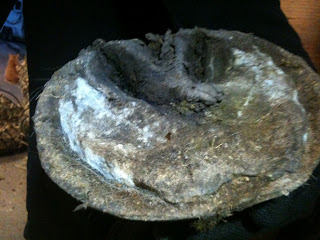 The bottom of the foot shows the flare in spades. That's a 3/4 inch deep/wide gap between the hoof wall and the sole. Look at that enormous hunk of false sole he's got on his toe. 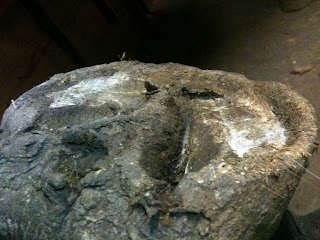 And of course the hoof wall is hugely built up. You can see where the false sole is trying to shed too. 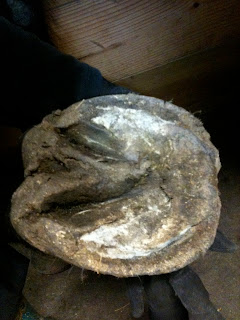 No caudal hoof, atrophied frog, and tons of hoof wall on the front quarters, although his toe is very short (I'm guessing due to the clips). In fact it sort of looks as though the shoe went OVER the toe callus?

The sad thing is that this is a sound hoof, in a shoe.

So, what to do. I guess I've sort of known that his feet were deteriorating bit by bit... I've been watching the caudal hoof shrink and watching to his landing change to toe-first. But he's sound, so I've ignored it. Ignorance is bliss, right?

Do I call my farrier and have him put the shoe back on? It's been 28 days since Saga was last shod, and his feet... look like this. Do I call the "farrier" from down the street and have him pull the other shoe, and try barefoot again? I had planned to do this eventually but was waiting till the summer heat when I won't ride much, rather than doing it now. I had also planned to do some changes to the track to make it more barefoot-friendly before pulling his shoes, but haven't been able to due to the rain we've been having (yay rain!).

In addition, Saga is supposed to joust at a competition in May, and I need to keep him sound for that - barring unforeseen circumstances, of course. Does that mean shoes, or will he be OK barefoot? I guess I won't know if I don't try.

I have a vet appointment for him later this week for annual shots and such, so I can have his feet re-xrayed then to see if the sole depth has changed. But once that false sole is removed, I'm guessing the answer will be that sole depth is the same as it was in November. For whatever metabolic/footing reason, I think Saga just isn't a horse who grows much sole. In fact, I was looking back at his pre-purchase exam from four years ago, and the vet mentions that he "would like to see more sole". I didn't have a clue what that meant at the time, but now a statement like that sure as heck would raise all kinds of red flags.

For tonight, I stuck an easyboot on the LF and gave Saga an extra alfalfa cube treat. I'll sleep on things and see how I feel about it in the morning.

What would you do if Saga were your horse?
Posted by jenj at 9:08 PM