I haven't posted pics of Saga's feet for a while, and frankly, I'm really hesitant to do so now. They look quite horrible.

To fill in on the latest bit of the ongoing soap opera that has become Saga's hoof care... he was last shod four weeks ago by the vet farrier. Prior to that, it was eight weeks between shoeings. At five weeks exactly he threw the RF, then at six weeks exactly tossed the LF. I could not, for love nor money, get an appointment with the farrier, despite trying for over four weeks. I booted Saga as I could, but still, his feet chipped badly. I'm afraid the farrier didn't have much to work with when he shod Saga this last time, so you will see the chips in the bottom of the hoof wall. Saga has an appointment next Tuesday for new shoes - it will be exactly five weeks, and that's the schedule we're going to try to keep him on from here on out. Maybe, just maybe, that will magically help somehow. Maybe.

So, here's the awfulness: 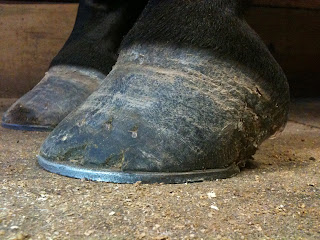 LF. You can see the truly awful event lines. And look at the difference in angle of the hoof wall, from the coronet band all the way down. The first 1/2 inch or so is soooo different from the last inch. I have been trying to grow that angle out all the way down for two years now, both barefoot and shod, and have not been able to make any success. It's frustrating to know just how much pressure that must be putting on his toe. GAH. 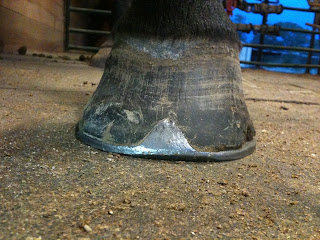 LF again. Hairline is pushed up, huge flare at the bottom 1/2 of the foot, event lines allll the way down. I have tried so, SO many things with his diet to prevent those event lines from happening, and yet they still do. At this point I have no idea what's causing them, and I just can't win. He's very, VERY sensitive to something in his environment, I just don't know what. 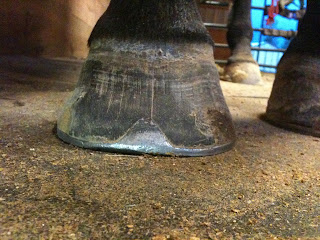 RF. The thing that looks like a crack on his toe is new. Well, not exactly... he used to have it a year or more ago when the quarters were too long. It's back. It's superficial, but still... it's a clue that things aren't right. More event lines, more flare... and the medio-lateral balance is soooo off. 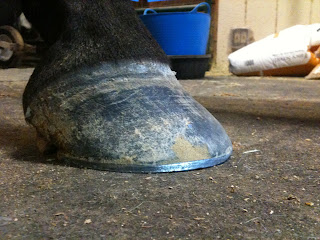 RF. At least his heel isn't terribly underrun and the changes in hoof wall angles aren't as horrible as the other foot? This is the one he's always had a better landing on. 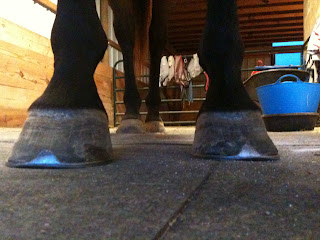 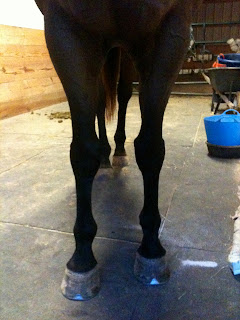 I guess he stands fairly straight, despite everything.


I'm so depressed looking at these pics. I guess the ONLY thing that's good is that he's sound and happy to work, and I KNOW he would be lame without shoes, because his soles are so thin.  Also, one thing I have learned looking and bare feet over the last few years... beautiful-looking feet may not function terribly well, while awkward-looking feet may function fantastically. His feet are definitely functional, even if they make me cringe. I guess that's something.
Posted by jenj at 9:34 PM