Mysterious things growing in my garden

Our garden has been a little haphazard this year, but I'm proud because we actually HAVE one. This spring we had lots of greens, and this summer we've gotten tons of tomatoes (all volunteer plants that survived the compost process, no less). However, we had one odd plant that I could NOT figure out what it was. 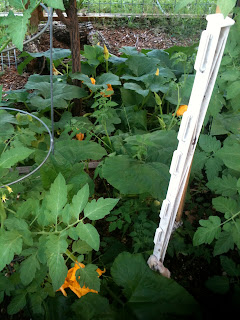 Ginormous curcurbit plant that took over half the garden. It kept blooming and blooming but didn't produce any fruit at all.

Eventually it produced two small round green fruits. Hooray! Maybe they were cantaloup? They got bigger and stripey. Watermelon for sure! I couldn't wait for harvest time, and even Googled how to tell when watermelon are ripe.

And then the big one turned orange. 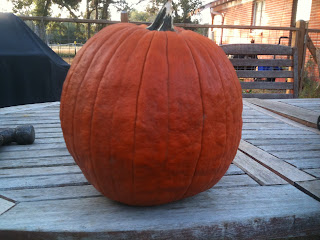 Yep. I grew a pumpkin. IN JULY.

My experience is limited to pumpkins in the fall. You know, carving at Halloween? Pumpkin pie at Thanksgiving? Pumpkins are NOT supposed to show up in July. Clearly, my haphazard gardening skills are worse than I thought. I mean, we never even planted any pumpkins!

However, I worked hard to grow this pumpkin, so I figured I could can pumpkin puree and save it for the appropriate time. The seeds are edible too, if you roast them. So I spent some more time on Google, this time looking up pumpkins instead of watermelon. It turns out that canning puree is NOT  recommended for pumpkins, because they are very low in acid. You can do it if you have a pressure canner, but I don't have one, so I opted to go with the freezing option. 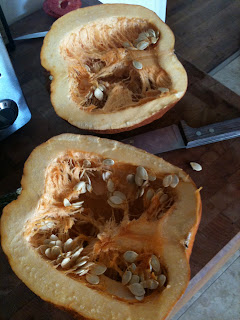 First, I sliced my pumpkin in half so I could remove the seeds. I sort of pulled the seeds out with my hands, leaving the stringy innards in the pumpkin. 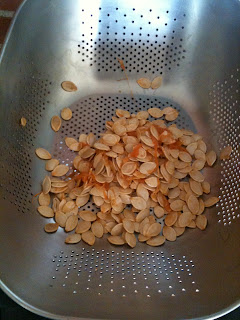 This pumpkin yielded about 1 cup of seeds, but many of the seeds were kind of withered and sad-looking. Not sure if that's normal? 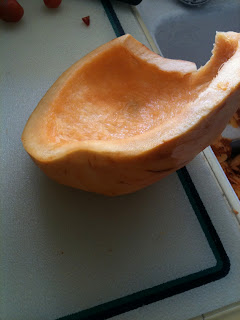 Next, I scraped the stringy insides out with a spoon (this much I remember from carving pumpkins). The directions said to peel the rind, so I used a carrot peeler to do that. It worked pretty well! 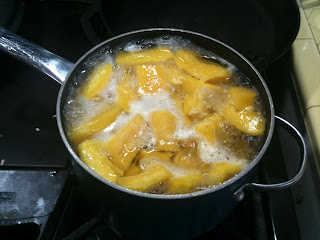 I chopped the pumpkin up and boiled it until soft. I probably should have used a bigger pot! 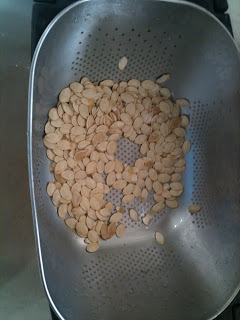 While I was waiting for the pumpkin to boil, I pulled all the strings out of the seeds and washed them several times in a bowl of water. This was actually pretty tedious and took several washings. 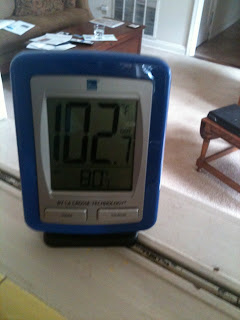 The instructions said to dry your seeds in a warm oven, or with a hair dryer. Or, if you live in central Texas and it's 102 degrees outside (that's 40 for everyone else), just stick them outside on your garden table. 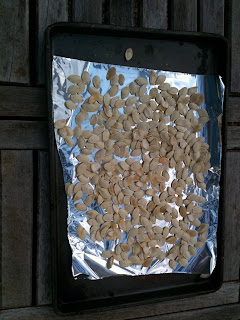 Dry little seeds, dry! (Naturally, it rained for the first time in six weeks about an hour after I put them out. They are now drying in a warm oven. Sheesh.) 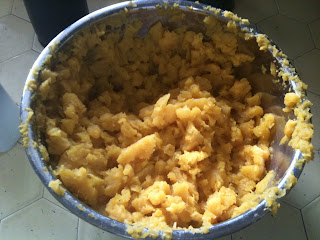 After the pumpkin had been boiled until soft, we mashed it with a potato masher... 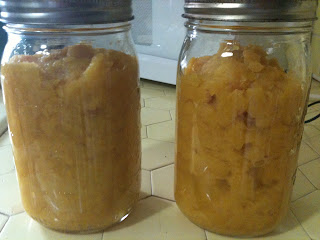 ... and finally loaded it into jars to freeze. Notice we left plenty of room at the top (headspace) - this will prevent the jars from cracking as the contents expand during the freezing process.

We are DEFINITELY having pumpkin pie at my house this Thanksgiving!
Posted by jenj at 8:04 AM