Dear Murphy, you are a mean-ass bastard and your "laws" suck

Long-time readers will know that when my husband leaves town, stuff breaks. Not minor stuff, like the TV (which we never use) stops working or something. No, I'm talking big, honkin' oh-fer-fffs-sakes problems. For example:
There's a laundry list of other items too, from long ago when we lived in our old house in Suburbia. The gas heat was cut off on the coldest night of the year, I ran over a stick with the car and it totally messed up the front steering... it would almost be amusing if it were happening to someone else. But somehow it's become Murphy's law that something huge breaks when the hubby leaves town, and usually the further away he goes, the bigger the problem.

I'm sure by now you're wondering what the heck has happened this time. As luck would have it, there's a massive water leak somewhere under the guest house. 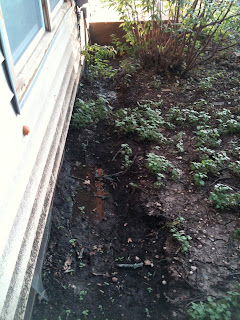 Water is not supposed to be here. 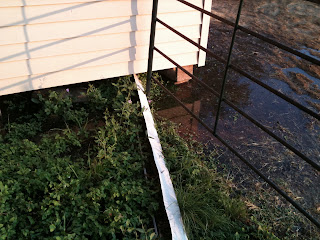 Lake at the back east corner of the house. Awesome. 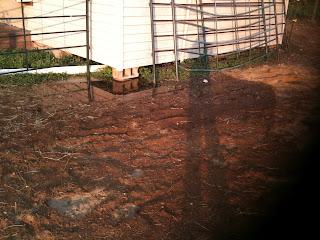 More water. I do NOT want to see my water bill this month! 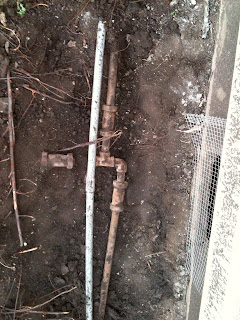 This is where I was hoping the problem was - a coupling where the trench is in the first pic. After letting it dry out for a couple of days, I unburied the coupling and turned the water back on - that coupling was bone dry.

I looked around the house, hoping to find the leak in an accessible area. See, the pipe runs under the house for its entire length, then runs along the back wall to the kitchen and bath. The house is pier-and-beam, with less than one foot of clearance under it - which meant that if the leak was under the house, there would be no way to fix the pipe and we'd have to re-run the entire line. 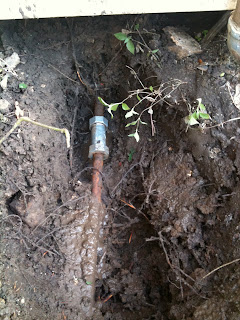 By some miracle I found a leak near the kitchen window. It was the hot water pipe, which I discovered when I put my hand in near-scalding water. I called the plumber out*, and he dug out the pipe, cut out the problem section, and applied the pressure coupling you see here.

We turned the water back on, and the pressure coupling appeared to hold. I left the water on overnight... only to come out to even MORE water the next morning. This time, the water was cold, and it was clearly not coming from the new coupling.

Long story short, we had the entire water line rerun. Everything is now tidy, dry, and functioning normally. For the next 50 years, I hope.

Hubby is never, ever allowed to go out of town again. Especially not to Patagonia, which is where he's going next week.

* This makes it sound simple. I initially called THREE plumbers, none of whom called me back. Then I called my across-the-street neighbor for recommendations. I got the first plumber out, who told me he didn't dig. I paid him the fee for the service call, then *I* dug out the first coupling. When that was dry, I called my neighbor back to see if he had any other recommendations. We got a friend-of-a-friend plumber out, who replaced the hot water coupling at 6 p.m. on a weeknight. When that didn't solve the problem, I called him back out, and he re-ran the line over the weekend. There's something to be said for having neighbors who know people! I am quite indebted to them!