Hubby is out of town (in Alaska, where it is NOT 102 degrees, the lucky man), so I took both Saga and Oberon for a jumping lesson this morning. I figured Oberon would require more energy to ride, so I hopped on him first, and boy am I glad I did!

Oberon started out very looky in the arena. The roll-top and the stone wall were both horse-eating objects that required careful inspection. There were also some piles of new arena footing that were somewhat suspicious, so our trot warm-up was less than straight and together. We sort of swerved around the arena a couple of times, not really spooking but definitely looking at stuff. Eventually he decided that it wasn't worth the effort and settled down. When we went to canter, I ended up pulling him back to a walk and asking for a walk-canter transition, which he does very well. His trot-canter transition tends to flop on the forehand and end up with some running, so I need to get with my dressage instructor and work on that a LOT.

The thing about Oberon is that he doesn't ever feel like he's really going anywhere at the canter. If he does get forward, he sort of flattens out his stride, which is not good for jumping. He also likes to chip in to the fences if he's not right on stride. Lucky for me I've been working on waiting to the base of the fence for oh... the past two years!... so I'm getting pretty good at staying with the horse even if the spot is less than perfect. I can also usually now tell when it's really going to suck, but am still not to the point of being able to reliably fix it before it falls apart.

This is the first lesson I've had since the hunter show, and after staring at the pictures of me jumping for faar too long, I knew what I wanted to focus on. I concentrated on keeping my wrists against his neck instead of my knuckles, and keeping my elbows in. And you know what? My problem with popping up too quickly after the fence magically disappeared! I think that I was somehow compromising my balance on the landing side with my hands in chicken-wing knuckle-in position, and I was having to sit up really early as a result. Biomechanics are so interesting!

One thing about today is that Oberon was much more respectful of the fences than he has been in the past. I think the solid XC fences that we've been doing have really helped with that. He also requires a huge amount of leg strength to keep him going. I felt like my leg was on him constantly, whereas with Saga I'll use my leg to support him when needed. Using my leg all the time meant that I was sitting more in the saddle than when I ride Saga. Not sure if that's good or bad, it's just different.

I did manage to get a little video of us at the very end. I'm still arching my back far too much, which means my core is not engaged. I think my hands are a little better though. One thing at a time!


Next up was Saga. I was having serious reservations about doing two horses back-to-back - it was already 95 degrees out and I'm not in any kind of shape. Lucky for me, Saga's the "easy" one, so it wasn't so bad. We warmed up very nicely in trot - Paige said we looked "pleasant". It's amazing how much nicer things are when you're not trying to run your poor horse off his feet! Our canter transitions were still kind of sticky the first time, but he got better as the ride went on. He's definitely still falling in on his right shoulder - that's something I really need to spend some time on in the walk and trot to try to build him up so that we don't careen around corners when jumping. He did canter very nicely - better to the left than to the right, where he loses his balance and falls in.

We warmed up over the verticals that Oberon had finished on (LOL!) and then we did a little course. And DAMN, we were ON! Steady all the way around (yes, I counted one-TWO, one-TWO the whole time. What's your point?) and we got to the base of every fence. We missed the left-to-right lead change (same one we missed at the show) but did a simple change quite tidily in the corner. His balance was great, I was steady over the fences, and I didn't pop up after. Interestingly, he also landed in a much more balanced frame when I stayed down after the fence, which is something we've really been struggling with. When we'd finished the course, I patted him like crazy and told him what a good boy he was, then looked back at the jumps - which had all magically gone up to 2'9. Paige was smiling and said "Wow, that looked like a really nice hunter round!" Not that I wanna do hunters, but that's a pretty good compliment considering where we were not that long ago!

I asked about teaching Saga to do flying changes, which he doesn't currently do (or if he does, I don't know how to ask). I pointed out that if I'm going to do a few hunter schooling shows, at least I can *try* to get the leads, since that's part of what knocked us out of the ribbons last time. Paige said we should start by asking him to do them over the fence, gave instructions for how to do so, and then I gave it a go:


In my efforts to get the lead change, I completely forgot about pretty much everything else, and left poor Saga to save my sorry ass crawl over the fence. He's SUCH a good boy!

I sort of managed to redeem myself on the next line though. We came in a little awkwardly, but I managed to sit up and ride in between, so the second fence was pretty clean. We even got the right lead on the landing after the last fence, which is his hard lead. Guess I just have to ask correctly!

Oh, and I captured this still from the video, of the last fence. 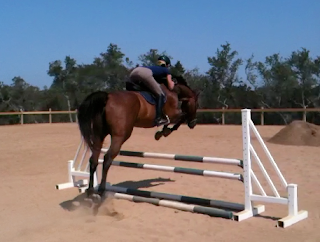