Every ride should be this much fun!

Hubby and I went roading with the hounds again today. They were short on whippers-in and the MFH was traveling, so instead of staying out of the way of the huntsmistress and hounds, we were actively encouraged to help set up a perimeter and discourage the hounds from leaving the property in case they caught the scent of anything. It was a good thing too - they flushed three rabbits, and we were actively engaged in holding a perimeter twice.

Saga now knows exactly what's going down when we unload him at the huntsmistress's barn. His ears were on high alert as we tacked and groomed.  Fortunately, he was pretty chill once I got on, and was cool to hangout chatting. Naturally, Oberon just looked around for more foods.

The hunt started off going counterclockwise from the kennels. As we made our way down along the northern fenceline, the hounds flushed a rabbit, which headed straight for us. The leader of second flight and I got there first, and did our best to stop the hounds, but they were quite keen on their quarry and didn't listen to our shouts of "LEAVE IT" and "GET TO HER". About half the pack made it past us before the whippers-in and ATV got there, and there was much excitement as they laid about with rat shot and hunting whips (note, I've never seen anyone hit a dog, it's just used for noise to distract them). We were in among the hounds and the ensuing chaos, and I remember thinking that Saga was being SO GOOD about all the commotion. He went where I asked, didn't flinch at all, and just sort of waded in and did his job. He's such a good boy!

After that excitement, we rounded up the hounds (well, I got out of the way while others rounded up the hounds) and got them back to the huntsmistress. We continued our ride over to the southern fenceline, when another jackrabbit popped up between us and the hounds. The rabbit was downwind of them and I'm not sure if they saw it, but when we started yelling "rabbit" and got into position to potentially head the hounds off, they figured it out and started going after it. Fortunately, it was much too fast for them and they left off the chase pretty quickly.

Because the hounds were cueing off of things that move instead of scent, they were put up for the day. As usual, we got to go play on the XC fences. I'm still sticking to the smaller ones, but I'm definitely feeling much more confident over them. Saga is staying much more balanced under me for longer, and I can tell he's getting more fit. I, unfortunately, can't keep up with him. He's getting really strong when there are horses in front of us, and the waterford that I'm using just doesn't give me enough brakes. I'm thinking of bitting up to a kimberwicke, or possibly a pelham with a converter on it. One of the other riders even commented that I'm so little and he's just yanking me around. It's embarrassing not to be able to stop your horse, you know? It's also way embarrassing to have to pull off because you are gasping for air. I HATE jogging, but I'm going to have to do something to get more fit. Sure, I can buck hay with the best of them, but that's clearly not going to be enough if I want the fast ride up in front.

Anyway, the XC fences. We did our usual little logs, and did the training-level doghouse into the water with a log coming out. There were a couple of other training fences that I wanted to try, but there was nothing really straightforward (that is, not funny-looking, and either on a flat area or uphill) that caught my eye. Next time. ;)

Oberon is also getting more confident, and for some reason today was really putting forth a lot of effort on the jumps. Well, OK, some of the time. This one 2'6 log pile he cantered up to, broke to a trot about 2 strides out, walked about 1 stride out, and then delicately hopped over from a walk. It was quite tidy, he didn't touch a thing, but he was clearly going over it in his own time, thank-you-very-much. Goofball. He also launched off the bank (normally he just drops down), although his effort up was less than stellar (more of a climb than a jump, really). I think he just needs more time and more miles - this is really only his 15th or so ride over fences, so I'd say he's doing pretty damn well all things considered. And he takes good care of hubby, which is really the important part. 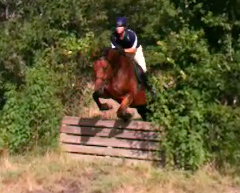 Oberon and hubby on the final jump of the day - a coop on a fenceline. Not too shabby!

Next weekend is more roading and possibly some trails... we'll have to see what the plan is. I am SO looking forward to it!
Posted by jenj at 4:41 PM