Show postponed due to rain? Go foxhunting instead!

The LOPE benefit show was postponed until next Sunday, due to all the rain we've gotten in the last few days. While I was a bit bummed that the show was postponed, we really needed the rain. It's been almost 6 weeks since it last rained, and the ground was starting to crack pretty badly.

Besides, despite the wet conditions, the first real foxhunt of the year was ON! Well, OK, it's only cubbing season, which means polo shirts and a much more relaxed atmosphere. BUT STILL! We got to take the hounds out to my favorite fixture, and  it was FANTASTIC!

I took Oberon instead of Saga, since he's never actually been on a real hunt before. We started second flight, but first wasn't going too fast so we moved up after about 10 minutes. OMG, Oberon is a natural-born hunt horse. He just keeps up with the group, no matter what they're doing. He also totally "gets" the hunt thing. 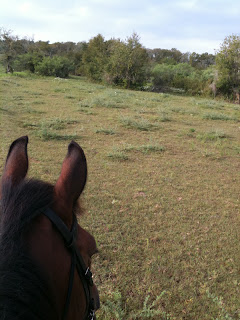 Hey mom? The hounds are over there in the trees. 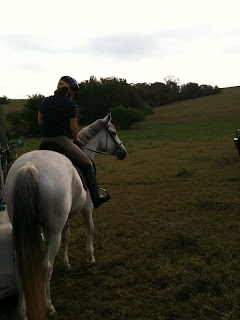 Fuzzypony went too on Taran.

We only had one silly/spooky moment. Those dots you see in the pond are hounds swimming (they were cooling off and getting a drink). Oberon was fine with hounds on land, but hounds in the water were a bit much. He had to stop and stare a bit. 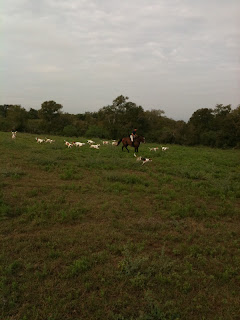 The hunstmistress goes by with the hounds. 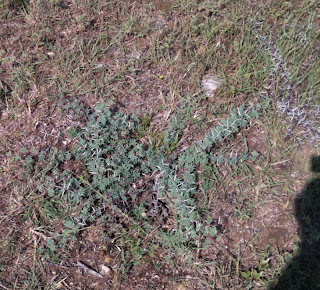 The only bad thing about this fixture is the mesquite. The grey spines you see in this picture are thorns - they are each about an inch long. There were small shrubs like this EVERYWHERE. Oberon for the most part went around it or hopped over it.

We were out for a good two hours, which is pretty great for the first of the season. First flight saw FOUR Talley-hos! Well, OK, it was probably the same two coyotes twice, but still. The hounds kept catching the scent and losing it, and then we'd see one of the coyotes go sauntering off from one copse to the next. We actually had one where the coyote went perhaps 20 feet directly behind the huntsmistress as she was cantering along! The hounds were nowhere to be seen, and the coyote was headed downwind so of course they did not catch the scent at all. Coyotes are very, very crafty creatures!  Good thing too - it means there's always something for us to chase next time. :) 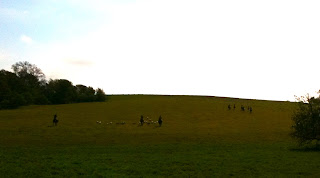 The hunstmistress and hounds on the left, and second field on the right, headed home.

Oberon was an absolute blast to ride. He trotted when the lead horse trotted, stopped when he stopped, and cantered when he did too. I never had to haul on him to slow down, and the one time when I felt him accelerate into a flat-out gallop, I stood up a bit and half-halted, and he came right back to me. He was very balanced, even cantering down hills (Saga tends to sort of roll down them). He was happy to stand when the others stood, but caught on quickly that he was to move off with the group. I was worried that he'd have a problem keeping up with first flight, but I shouldn't have - he had no trouble at all. What a star pony! 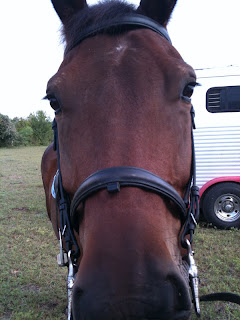 Yes, I'm all that and a bag of chips. Feed me now?

The hubby might not be getting his horse back. ;)
Posted by jenj at 3:55 PM