Saga wins ex-racehorse award; Oberon kicks butt in dressage (but gets eliminated by a culvert)

Today was the LOPE benefit show, which was rained out last weekend and rescheduled for today. Fuzzypony took Taran, MC took Cash (his first show in 5 years!!!), and I took Oberon and Saga. I had entered Oberon in an in-hand trail course, Intro B and C, and the 18 inch hunter class. Saga was entered in Intro B and C, the 2' hunter class, and an under-saddle trail course. In hindsight, riding two horses in four classes each, with only about 30 minutes in between each class, was probably a really bad idea, especially since I had to change tack between every class. BUT... we had a fantastic day, all four of the boys were great, and we brought home some really nice ribbons!

I started out with Oberon in the in-hand trail course. It involved walking through an L, a zig-zag, over a bridge, and a few other things. I thought he would stop at the bridge, but after a slight hesitation, he walked right over it. I got a few points off because I told him "good boy!", but whatever. We ended up 4th out of a very big class... I think there were 15 or so people in it. Considering he'd never done anything like that, I was very pleased with him.

Next up was Saga on Intro B. I had let him get some yucks out in the round pen several hours earlier, so I kept our warmup short and sweet. He was not as through his back as I would like (an ongoing issue), and I failed to set him up for good bend through some of the corners. All in all, I felt like I rode a really solid test, and we scored a 67.19%. This tied us for second place...

... with Oberon. Yep, somehow I managed to ALSO get a 67.19% on Oberon. I wasn't as happy with this test to be honest - we had almost no warmup time (the show was running 15 minutes ahead) and he took a really hard look at the judge's stand. He was also really sluggish and behind my leg for most of the test - I got "Needs ERG" like 5 times on my test. Oh well, we managed to muddle our way through.

After a quick tack change and even quicker warm-up, Oberon and I were off to the hunter class. The hunt classes at this venue are always fun, because it's over undulating terrain out in a big field, and in addition to jumping stuff you also have to some trail-type things. At this show we had to go into a "pen" with fake Canadian geese. I was really worried about the geese, but I SHOULD have worried about the culvert and bridge to the right of fence 4. He had a tantrum right in front of the jump - which in of itself didn't phase him, but the culvert, OMG THE CULVERT. After three refusals (the last of which involved me smacking him, HARD, and kicking the tar out if him) it became apparent that we were not going to get over that jump, so I went around it and finished the course. It's funny - the actual jumps were not the problem, but all the other stuff around them was. He spooked at the pond. He looked at some rocks. He looked at wreaths hanging on the fences. He spooked at the flowers in the finish box. ARGH! I could not keep his little walnut brain on the task at hand. Since we skipped the one fence, we were eliminated, but dammit, we made it around, more or less. Brat.

Another speedy tack change and it was Saga up for the 2' hunter. He didn't look at a single thing, but was a bit full of himself. He tossed in a buck coming off the second fence, then would not come back to a trot for the third element (the Canadian geese). We managed the geese without a problem, then got a good rhythm going for fences 4, 5, 6, and 7. I remembered to stay steady before the jump, but I am making huge movements for such tiny fences and it's really throwing him off. Oops. I again had a hard time getting him back for the 8th obstacle (walking over some logs on the ground), but our last fence was tidy enough. We're fine if we have a rhythm, but if anything interrupts it I just can't get our shit together fast enough. We managed a 3rd place on that one, behind two girls who ride at a hunter barn.

Next Saga and I had to go put in our ride for Intro C. Saga was hot from the jumping and had suddenly forgotten how to canter on the right lead, so going into the test I was concerned about getting the canters AT ALL. As it turned out, the canters were fine (well, for him. We scored poorly because we were unbalanced, but I expected that). However, he kept doing his "hopping" thing at the trot, where he throws his head up and tries to do a little mincing canter transition. My fault entirely, I didn't give him a real chance to come back to dressage mode and relax into forward contact. Still, we landed a very generous 62.5% for 6th place.

Finally, I had Oberon for Intro C. In the warmup I focused on forward. I got really lucky in that we rode right after the judge took a break, so I while she was gone I took the opportunity to show Oberon the judge's stand, and go down center line a few times. The result was that, if our turn off centerline wasn't perfect, at least we didn't spook and careen off centerline! I was very pleased with our test - it was much more forward, our canters were decent (for us, they still aren't super), and he had a lot more energy. I still can't really get him to bend a the poll - like at all - so we got marked down on submission. But I'll still take our 67.5% and second place!

By then, I was pretty beat. Today's high was about 95, no breeze, no shade. Oberon takes a lot of energy to ride, and his Intro C test was my 7th go of the day. I was supposed to ride Saga in a trail class, but I scratched. I knew that he was done, and I was toast for sure.

When we went over to collect our scores and such, and the show organizer told me that the judges had nominated Saga for their special "ex-racehorse" award! He got a giant purple neck ribbon, a tub full of sooper speshul horse cookies (I may eat one or two), and his photo taken with the organizer. *I* got a $75 gift card to a local saddlery. Woot! It's possible that I also got reserve champion for the show, but they were having some issues tallying scores. I should know in a couple of days.

I only have a few pics that we took when we got home, but I'm hoping that I'll get some nicer ones from other photographers later in the week. 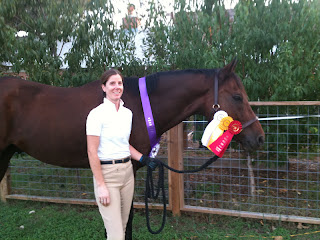 Doesn't Saga look handsome with that big purple ribbon around his neck? 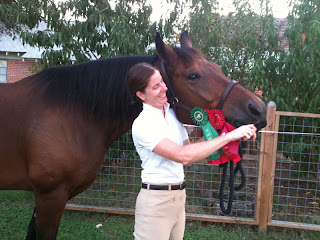 MC did a lovely job with Cash in Intro B and C. I believe she scored above a 60% in both! Not bad for a rider who hasn't shown in 15 years and a horse that hasn't shown in 5. She also took him in the advanced in-hand trail class, where she got 2nd. She would have won if she hadn't used her voice to tell him "good boy" a few times, but oh well. He was a super star and he knows it!

I'm off to bed now - hopefully more pics soon. I hope everyone else had a really great weekend too!
Posted by jenj at 9:00 PM