You know how sometimes there's plenty going on, but you're just not inspired to blog? Yeah, that's been me. I've been riding - although with highs last week of 105, I admit not as much as I'd like, especially given that we've got a show this Saturday. I've made it through the entire four seasons of White Collar (yes, in two weeks. Don't ask.), and am now bummed that I will only get to see Matt Bomer (swooooon) weekly, or on re-runs. The husband is out of town, but nothing has broken (yet) - still waiting for that axe to fall. And the current scorpion body count stands somewhere north of 15 (UPDATE: Make that 16. I just squished another one on the wall. Ugh). I have no idea why there are so many all at once when I haven't seen any for months, but at least the little bastards are showing up dead or nearly so.

Let's see, what to catch up on. Oh, Saga's got a new farrier. This one also works for a (different) vet, but actually calls back and responds to text messages. He makes house calls too, so I might not have to haul any more to get Saga shod. That would be super-awesome-nice. The first shoeing job was a little scary, but Saga is sound and comfortable, so... I guess it's all good. 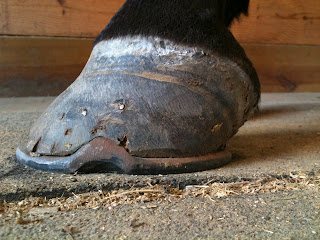 LF. That damn bulge is STILL there, after two years of trying so many ways to let it grow out. The new farrier is trying to rasp down the hoof wall, which makes me cringe. HOWEVER, when I pointed out that what really needs to happen is that the wall needs to be at the same angle all the way down WITHOUT rasping, he said, "You're right, and that's where we're going to be in six months or so." At least we both have the same end goal in mind! 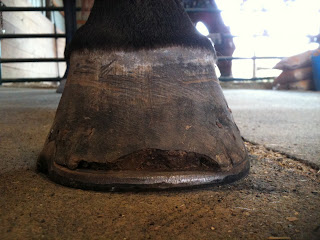 When he pulled the previous set of shoes, a huge chunk of toe came off. Awesome. Saga was at 5 weeks exactly... he looked more like 9 weeks. 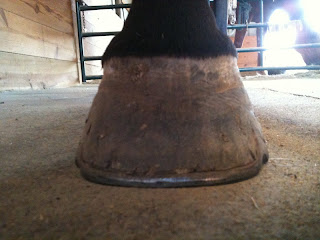 LF. Better, although the hairline is still pushed up at the quarters. 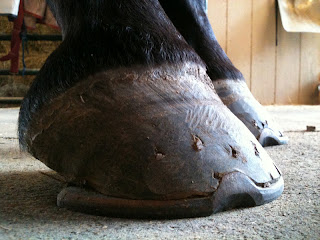 I've been doing regular jumping lessons, and seem to be mostly improving. I'll work on one thing and then something else (that I thought I'd already fixed) will break. Also, after seeing me school some of the Training XC fences (3'3 ish), Paige has jacked the fences up. We're jumping mostly 2'6-3'. It's going pretty well - my big challenges continue to be keeping the elbows in, and not letting him get rolling up to the fence. Saga is naturally downhill and has a big chest and shoulder, so it's hard for him to balance back. We're getting better, but we've got a long ways to go before I'll really feel like the power is coming from behind.

Paige also snuck up a nice 3'3-ish oxer on a line we were doing. I came around and said something like "HOLY CARP THAT'S HUGE". She reminded me not to look at it, and Saga jumped through like a pro. Is he awesome or what?!?! (Please ignore my 'flying chicken' elbows).

This coming Saturday is the LOPE benefit horse show. I'm riding Saga and Oberon in two dressage classes each (Intro B and C), a hunter over fences class each (Saga at 2'6 and Oberon is jumping Xs and will likely spook at the flowers), and a trail versatility class each (Saga ridden and Oberon in-hand). One of the likely obstacles on the trail versatility course will be walking over a tarp on the ground. Oberon will walk over one, but every time I move it to a new place, it's a whole new game. Most recently, he licked the tarp and then picked it up in his teeth, managing to scare the crap out of himself when the whole thing moved. Yep, he's speshul. I just hope he doesn't do something that classy at the show. I'm also on to him about eating fake flowers (he tried that at our jumping lesson last week). With his penchant for sampling anything and everything, I'm starting to wonder if perhaps he's part goat.

Intro B I'm not worried about. Intro C, with the canter, is going to be ... bad. Oberon has a canter departure that sort of resembles a Lazy Boy sofa trying to throw itself across the room, or maybe a hippo trying to heave itself to its feet. You can almost hear him go "UH!" on the departure. It's not exactly the most graceful thing ever, and I can't wait to hear what the judge has to say about it. Saga's canter departs, especially to the right, usually involve falling in on his shoulder, pinning his ears, and running. They're awesome and make me feel like SUCH a good rider (NOT). I decided to take him out and longe him the other night to see how he did on the longe line, and the answer is... he can't do a canter depart to save his life. He's so unbalanced he just can't do one cleanly, even on his own. It was really eye-opening watching him struggle so much - it's not just me, although I am obviously not helping any. We're not going to fix anything in time for Saturday, but I'll be longing him more regularly to help him figure it out on his own. In the meantime, we'll just muddle through the test and hope for a miracle.

Did I mention that MC, Cash's beloved Auntie (and Chief Bringer of Carrots) is taking him to the show as well? And that Cash's canter departs are nothing short of perfect? I'm going to get my ass kicked by my friend riding my "retired" schoolmaster. But hey, the ribbon she's going to come home with will look great just the same! ;)
Posted by jenj at 9:56 PM