Working Equitation - Another thing that Reddums kicks butt at

This weekend, Reddums and I attended a working equitation clinic, just for the fun. Since a lot of the obstacles are similar to the medieval games that he’s very experienced with, I figured he’d be good at it and I could hopefully learn something new. Besides, it was located at a gorgeous facility with about 30 Lusitano stallions, many of whom are national champions at one discipline or another. Ok, so I did worry about being completely outclassed, so I tidied up Reddums, polished my boots, and got out my show pads. At least we wouldn’t look too bad!

If you’re not familiar with Working Eq, here’s a pretty amazing video of the guy who’s the best in the world:

We totally looked like this by the end of the weekend. NOT!

When we arrived, Reddums was given a ginormous stall. I’m pretty sure it was 14x14, which is perfect for all of their 16+ hh stallions, but for Red it was sort of like a luxury apartment. He actually had a hard time reaching the hay rack, and he was pretty confused about the grooms coming in every time he pooped to tidy up (a little privacy, please!). Yes, this will do nicely. Where's room service with my massage?

As we were tacking up for the first ride, a dressage judge that I’ve met before came over to get everyone’s info and approximate level of expertise. I told her that on a good day we had first-level trot work, but he was gaited and so his transitions and canter needed a lot of help. To her credit, she didn’t make any disparaging remarks, other than saying she’d never met a Missouri Foxtrotter before and that he was “cute” (Sigh. Of course). 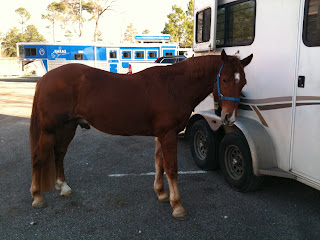 The clinic started off with a dressage lesson. The head instructor apparently didn’t read the part about Red being a gaited midget, because he didn’t insult his size or his lack of ability. Instead, I explained what our issues were, and he approached things like with any other horse. How completely refreshing! He stuck to working on the ride I had, and didn't immediately dismiss Reddums. It was really, really nice.

There were two key take away points this weekend that made ALL the difference in how Red went:

At the end of the first day, we had these fantastic walk-trot, trot-walk transitions, and somewhere in there I discovered a walk-canter, canter-walk transition too (!?!?!). When I remembered not to hang on the inside rein, our canter went from a running, hollow, four-beat disaster to a tidy, balanced almost-three-beat gait. I stopped having problems getting the left lead when I remembered to leg yield into the transition, sit up and ask (instead of throwing my body forward), and tip my pelvis up to give his shoulders space to jump up into. I also discovered that Red prefers I ask for canter with my outside leg further forward than I am used to. OK, buddy, if you are going to give me an amazing ride like that, I’ll do it however you want!

After those breakthroughs, the actual obstacles on the working equitation course were kind of a let-down. Red tromped over the bridge, opened the gate, jumped the hay bales (while I counted 1-2, 1-2, in my head so as not to rush him), and wove poles and barrels like a champ. We need more collection in the trot and canter if we have any hope of doing the poles and barrels at speed, but we definitely saw the beginnings of it this weekend. We finished up with two walk-canter-walk transitions both directions (with me grinning stupidly and how amazing those were), and I called it a day. I fed Reddums every single last treat I'd brought with me, and put him away.

I finished off my absolutely incredible Saturday with a trip to Charlotte’s Saddlery, where I had a gift certificate that Saga and I won at the LOPE show last October. My plan was to purchase a new pair of white breeches to replace the 15 year old ones I have with the blown-out waistband, but there I was in this amazing tack store and my Visa card just sort of jumped out of my wallet… and then my husband called to ask me to see if they had any men’s breeches, and what about a new helmet for him. So I left with white breeches, a new fleece sheet for Reddums, a new halter and lead for Reddums (his is 8 years old and sort of sad looking), gloves, a new helmet to replace my 10 year old helmet, and breeches for the hubby. My bank account is NOT going to appreciate that, but I really was replacing things that needed to be replaced. Or so I tell myself!

Sunday was slightly less exciting. We did another dressage lesson in the morning, but Reddums was not as good as the day before. It was a productive ride, and we were able to have some good moments, but it was just not as fluid and relaxed as on Saturday. We worked a bit more on canter, and the instructor said he couldn’t believe how nice our canter had gotten in just one day. Go Reddums! We also played around with going straight, which is hard because Red wants to go in one rein or the other, but not both at the same time. We talked a lot about how hard straight really is, and ended with some nice (for Red) trot-halt transitions. When I untacked him, I palpated his back a little, and sure enough, the area right behind his withers was sore. I checked my saddle and it was tipping a bit toward his shoulders, so I either need to change the gullet size or get a shim pad, or both. Poor guy, and he tried so hard for me even though his back was hurting. What a stoic boy!

I only got a few pics of the amazing facility where the clinic was held. It was overcast all weekend so the pics came out pretty dark, plus I was trying to be kind of surreptitious with my photography. 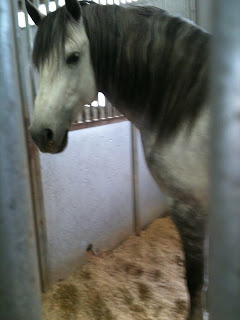 One of the gorgeous Lusitano stallions. I wanted to stuff him in the empty spot in my trailer! 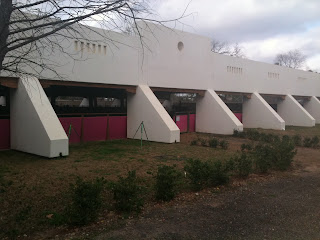 The covered arena. Ok, so I don't love the pink, but otherwise... WOW! 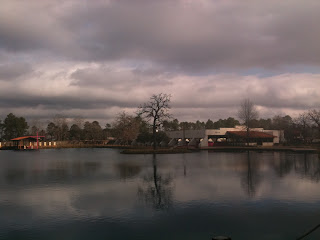 View of the arena from across the "lake" on the back of the property.

So the upshot of all of this is that the dressage judge AND another lady in the clinic (who happens to be an instructor at the nearby eventing center that hosts USEA rated events) came up to me and told me how NICE Red was and asked me what level we were showing. I said that we weren't, and they both told me that I should. I pointed out the lack of a decent canter, and the judge was like, “Yeah, but it’s gotten so much better literally overnight, and you’re going to score 8s with that trot of his!” The instructor said that he was such a cute jumper (there’s that four-letter word again) and so bold over all the obstacles there, I really should take him eventing.

So what the heck. We’re going to a schooling horse trials next weekend. Goldilocks level… because, you know, it’s not too big, it’s not too small... it’s juuuust right! ;)
Posted by jenj at 10:40 AM