Why I spent $120 on a pair of ThinLine reins

I have a confession to make: I have a hard time dealing with lots of types of reins. I know, I know, you’re thinking “seriously, how hard can this be? There are lots of options for different reins out there, just pick one and go with it! ” Let me ‘splain.
By now you’re probably wishing I’d quit whining about reins and just get on with it, so here’s my new investment: Thinline Reins. I accidently touched them when I was at the Dover store - no really, I was looking at the rubber reins, I touched the Thinlines and was like OOOOH. I picked them up and they folded in half over my hands, like a pair of well-oiled leather reins. They were super flexible and while they felt a bit thick, they are narrower than most reins so I didn’t feel like they would be too much in my hand. I winced when I saw the price tag – I’ve never spent $120 on a BRIDLE, much less a pair of reins, but what the hell (and SOMEONE who will remain nameless was shopping with me and may have been an enabler). Dover has a great return policy, so I figured I’d ride in them once and see what I thought.

I know, they don't look too exciting, do they?

And wow, I’ve been riding in them ever since. I LOVE these reins, LOVE THEM. They are super comfortable in my hand – the Thinline material has a little give to it, and they’re more of a round shape (but not so much that it’s awkward) than flat leather, so I find them easier to grab. They don’t stretch, and they don’t slip AT ALL. In fact I find that I can hold them in much less of a death grip, even if Paddy’s being strong, which means I’m carrying less tension in my arms and shoulders. They clean up quickly and easily, which is just my style. 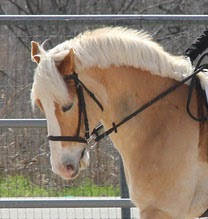 Boo black mark on his neck.

I have two complaints about them – first, the black ones come with running martingale stops, which I had to cut off (well, I pulled out the stitching to remove them). Not sure why black dressage reins would have stops? Oh well. The other issue is that they leave a faint black mark on Paddy’s neck, but I think that will go away with a few more cleanings and a bit more wear. I’ve seen a few complaints in online reviews that the Thinline material doesn’t last, but hopefully that’s not the case because DAMN, these things are awesome!

So in the event that you are rein-challenged like me and you have some extra money just burning a hole in your pocket, give these things a try! Oh, and… anybody want three sets of plain leather reins with stops?