In which I try my hand at being a groom

This last weekend, I had signed up for yet another schooling dressage show. We had big plans, even - we were going to move up to first level. The canter was coming along, the leg yields... oh, they were nice! Sure, I knew we would blow a few things, but I was excited about not having to ride yet another 20 meter circle.

And then last Tuesday, Paddy came up lame on the right hind. He wasn't better Wednesday, after stall rest and bute, and I made the call to scratch from the show. Hubby was out of town (of course), so he couldn't ride Brego in my place, so I conned MC into taking offered MC our two ride times. She's been taking lessons on Brego when hubby can't make it, and since I've ridden Brego exactly once during tryout weekend, it made way more sense for her to ride him. She decided to go, which meant that I got to play groom for both her and Fuzzypony, who was taking Taran.

It's been a looong time since I've groomed for anyone. In fact, I'm completely spoiled, because MC and Fuzzypony often groom for me. If you've never had someone help you out, it's kind of life-changing. There's someone to make sure your horse is spotless (even if you just toweled him yourself), someone to check your girth one last time, someone to wipe your boots, hold your water and your tests ('cause you need to go over them at the last minute), and someone to call tests or take pictures or celebrate or commiserate. And this time I got to repay the favor, at least a little. 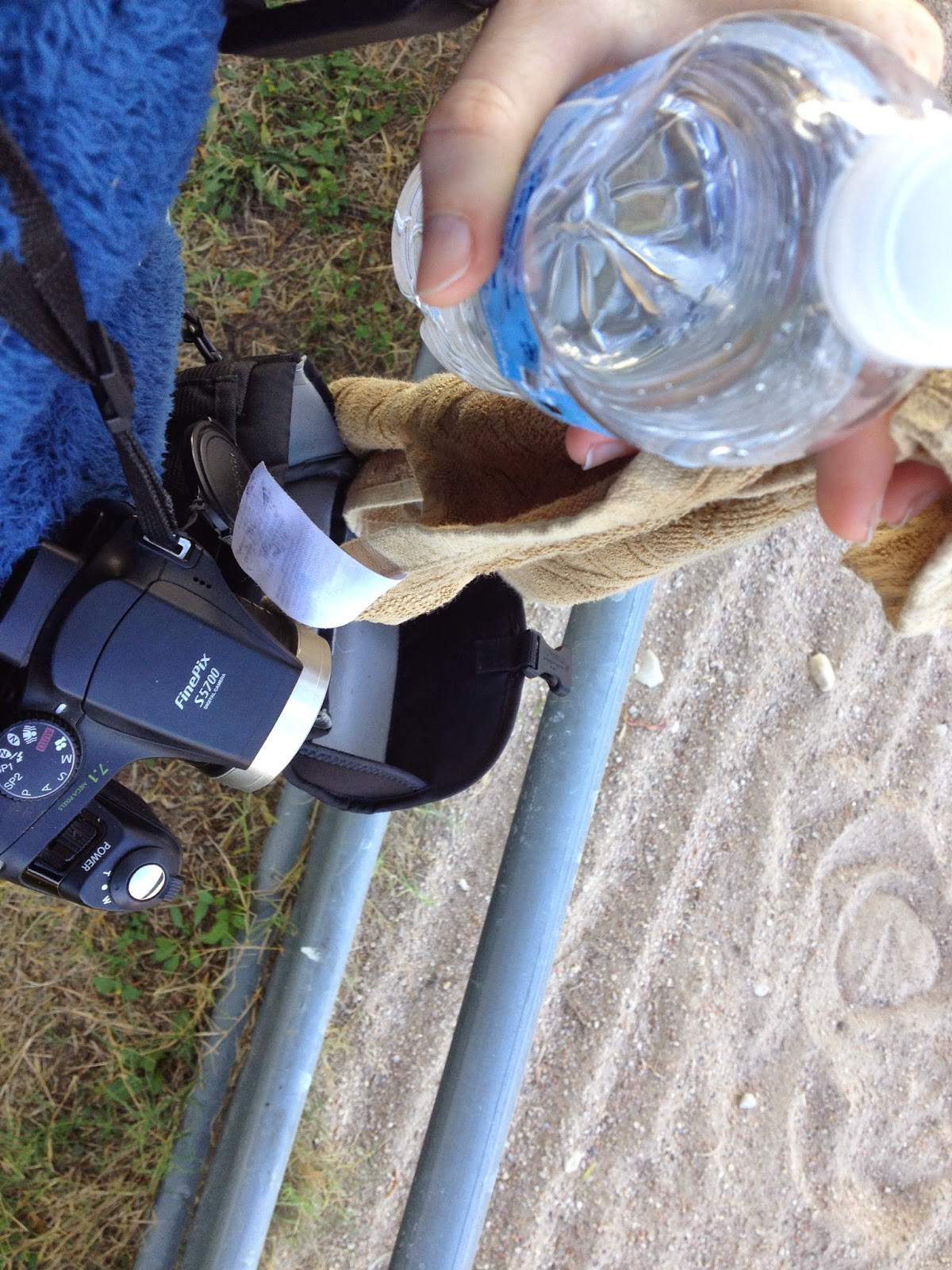 Water for competitor, towel for boots, camera... not pictured - paper copies of dressage tests (they're in my pocket). I kind of wanted a carryall or something!

You know what the most amazing thing about grooming was? I WASN'T STRESSED. I got to tell my friends to relax and get themselves ready while I tacked their horses.  I made sure they had their gloves and whips, polished their boots after mounting, and got to be there ringside to cheer and provide a tip or two during warmup (we were trainer-less for this show). I also got to take pictures and video during the tests, which made me even MORE grateful for all the pics everyone has ever taken of me.

Oh, and all you pro photographers out there? I'm giving you more money. Taking good pics is HAAAARD - I don't know how you guys do it!

And finally, I got to cheer them on and congratulate them on some SUPER NICE tests. MC got a 69.25% on Intro C, which was not only good enough for first place but also landed her HIGH POINT AMATEUR for the entire show!!!! She also got a very respectable second place with a 59 and change on Training 1. Fuzzypony got a 61.4 on Tr-3, which qualified her for the championships (WOOOT!) and a 58.something on her first ever First-1.

It was also super fun to sit on the sidelines and chat with other competitors. Everyone wanted to know about the big handsome black horse, so I filled them in a bit. I actually got three offers to buy Brego, including one lady who told her husband to "get out the checkbook," even though I told her he wasn't for sale at any price. Paddy may have a rival for biggest fan club!

All in all, a great show, and I really enjoyed playing groom for a change. Plus, couldn't be more proud of the Wyvern Oaks crew!
Posted by jenj at 8:36 PM