Long-time readers may remember my Baby Racehorse, Echo. Sunday marked one year since I decided that we could not treat his terrible disease, head shaking syndrome, and donated him to UC Davis to be part of their research program on head shaking. For those of you who are not familiar with this disease, I'd like to take a moment to share what I learned in hopes that if you come across a horse with these symptoms, you'll be able to identify them and know what your options are. 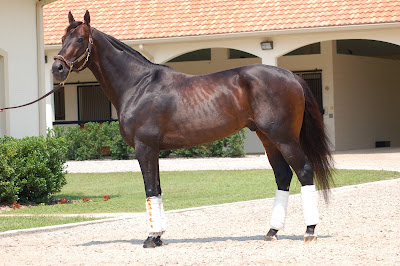 Quite probably the fanciest horse I will ever own.

Headshaking is a syndrome where the horse involuntarily flips or shakes his head in a vertical motion. The tell-tale action is the sudden jerk, like a bee flew up his nose. Horses also frantically rub their noses/faces on anything to relieve the pain, often causing sores or cuts. It most commonly occurs in TB geldings between 7-9 years of age. It can be seasonal, with summer being the worst time. The initial trigger is unknown - there are over 60 proposed triggers, but thus far research shows nothing concrete.

What causes the sudden jerk is a response to neuropathic pain along the trigeminal nerves in the face. Vets think it's a sudden, sharp pain like the pain of a migraine headache in a human. In Echo, this pain manifested itself in several ways. He rubbed his face so hard on trees, fence posts, and the water trough that he cut his face and mouth. He would stand with his head submerged - up to his eyes - in the water trough. Because Echo's HSing was photic (caused by strong sunlight), he could not eat during daylight hours, and would stand with his face in his feed tub, unable to take a single bite yet so obviously hungry. He went from being a sweet, calm horse to one that was irritable, spooky, and unpredictable. Under saddle, he would slam on the brakes to rub his face frantically against his front leg, and several times almost pulled his bridle off. He'd fling his head in the air unpredictably, or tuck his nose to his chest in response to the pain in his face, then buck and bolt. He would also "black out," where he would carry his head up and to the right, completely oblivious to anything in front of him, any voice or rein commands, anything. At his worst, he was dangerous to handle and ride, and was in terrible, terrible pain.


Because the cause of head shaking is unknown, it's difficult to treat. I would best describe it as throwing the kitchen sink at the problem and hoping that something miraculously helps the horse. We tried a UV-blocking mask (this helped some), a nose net (helped some), magnesium (might have helped?), cyproheptadine and carbamide (both antihistamines, and both on the USEF illegal drug list), and Dex pulse therapy. We considered doing a permanent block of the trigeminal nerve, but long-term success (that is, more than one year) in most cases is low and there is a high chance of making the HSing even worse, so we chose not to follow that route. 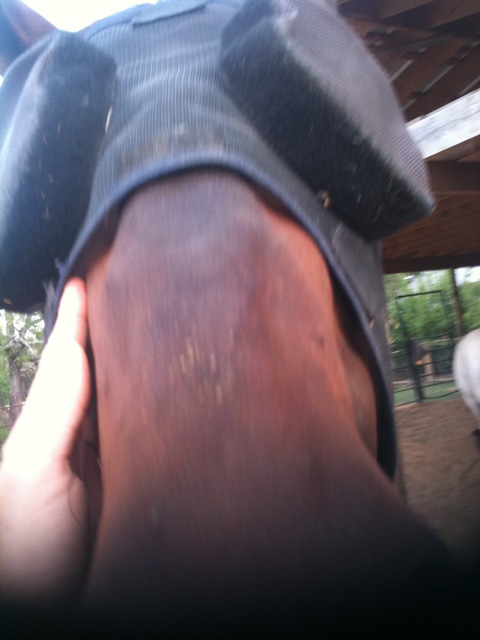 About this time, I found another horse owner in Austin who had been managing her HSer for the last 8 years. She kept him at a VERY nice boarding facility, and was able to do a few schooling H/J shows with him. She wrote me this about her experiences (reposted with her permission):


"I feel so much pain for you reading your story and thinking back over my years of heartache trying to manage Ian's HS.  I spent so much money trying everything under the sun.  Once his HS was "managed" I spent a ton of money on body work etc to undo whatever was probably already there and whatever all the tension from the pain caused.  I certainly saw amazing results and had a horse I loved to ride, but in hindsight, my choices in how to manage him leaving no stone unturned because I couldn't bear to see him in any pain, the money I spend trying everything under the sun plus keeping what did work going did which was 10s of thousands over the 8 years, going to the barn to take care of him every single night, not riding in lessons most of the year because I only rode him after dark which also then meant I rarely saw my husband during the week because I'd be at the barn until 10pm all seem pretty crazy.

I know I kept going with Ian long after anyone else would have and if I'd decided to put him down I knew any of my friends would have done it long before me, but I look back and can't believe what I went through and what I did for him every single day for 8 years.  I honestly was relieved in a way when his vision started to go [and I had to retire him].  He was still doing great and fun to ride but I just couldn't do the constant maintenance anymore.  Had I known he could live outside in retirement I would have retired him a long time ago. However, it's possible he wouldn't have done so well in retirement a long time ago.  His HS was the best it had ever been when I retired him.  That "best" still required a lot of effort and money.  I look back and wonder what life would have been like if I'd put him down before I committed much of my life to trying to make him well.

One of the hard things with HSers is that you know for some horses the solution is simple so it feels like if you just keep trying, you'll find that thing that makes your HSer better.  And if you quit, what if there really was a simple solution and you just didn't find it.  So many HSers seem to be really talented and wonderful horses too.  It's torture and if I were giving advice to a friend 8 years ago with Ian, knowing what was in store, I would have advised that friend to quit trying and put him down to end his pain.  I physically had the money to spend but never would have imagined just how much I would sink into maintaining him and in hindsight I think I would also advise a friend to not only end the horse's suffering but it's not worth the emotional and financial cost.  I love Ian dearly and can't imagine my life without him but the cost, in so many ways, has been significant.   Obviously I didn't take that path I would advise and it's easier to give that advice than take it but I'm glad to hear you are being realistic about the possible outcome. There is no easy answer.  My research does tell me this condition can be extremely painful.  My opinion is that when Ian is snorting and wiggling his nose, that is not pain, but when he flicks his head or flings it, that is pain and when he flings his head so hard his feet come off the ground, that is significant pain.  So I tried to keep that in mind when I was trying to get his symptoms under control and had decided he would not spend another summer suffering. "

This letter was perhaps the nicest gift anyone could have given me. She laid out exactly what Echo and I were in for with the head shaking, in terms of time, money, and emotion - but most of all, the pain that Echo was in. I realize that there are many people out there with HSers that successfully manage the symptoms, or they try for years to find that "magic bullet" that helps their horse.  With Echo, I simply could not stand to see him in so much pain despite everything we tried. I chose to donate him to the UC Davis research program on head shaking, in hopes that he could help teach us something about this awful disease, and maybe find a cure.

So my plea to you, as horse lovers and advocates, is that if you see a horse exhibiting these behaviors, don't immediately attribute them to the horse being naughty - it may be a response to sudden and severe pain. And if you're shopping for a horse, keep your eyes open. This is a terrible disease, and the cost is so high for both horses and humans.

For more detailed information about my experiences with Echo, here are a few links to old blog posts (Warning: these are not happy posts):


I hope you are at peace, my little Echo. It was the best I could do for you.