When last we left our (enormous) hero, he'd managed to break off a huge hunk of hoof and completely lame himself: 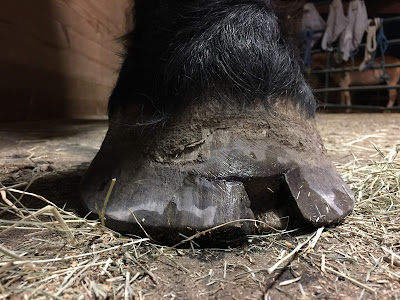 Basically the worst hangnail ever

Fortunately, the new trimmer (our old one moved, pout) was due out a few days later and was able to address this. The biggest concern of both the trimmer and the vet is some nasty bacteria getting up in there and causing further complications. So, we wanted to get any "loose" bits removed so that he wouldn't risk further pulling chunks off, and also to make it easier to keep clean and treat.

30 minutes of careful trimming later, we were left with this: 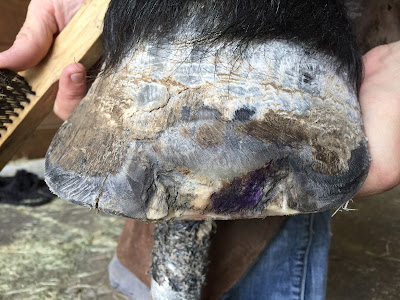 It's kind of hard to see from this angle, but she took it as far back as she could on either side. There's nothing left to catch on, although we are keeping an eye on that crack right on his toe just in case it decides to let go too.

Despite the major hoof resection, Brego walked off MUCH more sound after his trim. I think the pressure from the constant pulling on that loose hoof wall was really uncomfortable, and this seems to have done the trick to help him. You can see near the bottom edge there's some bruising (not surprising) so he's not 100%, but he's definitely bearing weight more evenly now. And of course galloping up to the barn for breakfast, because we starve him.

We're continuing to medicate daily and keep it wrapped, plus he wears a boot when he's out since it's wet. Now it's just a matter of waiting until that foot grows - grow big Brego foot, GROW!!!
Posted by jenj at 11:22 AM