Alfredo Hernandez, Day 2: It's all about the groundwork

I was really looking forward to our second ride with Alfredo - I felt like we really pushed through some things on the first ride, and couldn't wait to make more progress. So I admit that I was a little disappointed when we started out with groundwork - I mean, we're past that, right? It's not like Taran needs to be longed or anything before I get on.

Only, this was a different kind of ground work. What Alfredo wanted was for the horse to perform a turn on the forehand (more or less), stepping under very actively with the inside hind leg while softening to the bit. Written like that it sounds so easy, but I struggled so much with this. You have to stand just so. You have to stay strong in your core, keep your arm in the right place. Use of the whip must be judicious and perfectly timed. You have to feel the moment when the horse is correct, then push for another step or two, then stop. Alfredo is very, VERY big on rewarding the horse with a walk on a long rein, immediately, when he's done the right thing - and you really have to stay on your toes and pay attention to know when it's right. I should also point out that this kind of groundwork can be pretty athletic for the rider too, because I was definitely puffing at the end of our short session.


Alfredo makes it look easy. Me, not so much.

When I was finally allowed to mount up, I immediately noticed that Taran felt different. He was MUCH more active behind, and more through over his back. He was also very quick off my aids, something that I've been struggling with quite a lot (pony club kicking is generally frowned upon to get your "first-level" horse to trot, did you know?). When I gathered up the reins ("REINS SHORTER!!!!") and asked for inside bend, he was much faster to comply. I was able to get him rounder and he was much steadier into the bend, deeper and rounder, and more solid in the contact than on the first day. 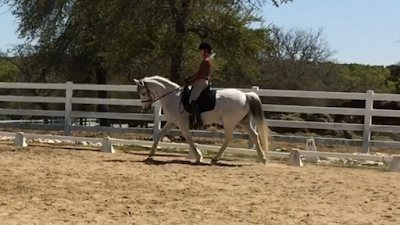 Look at my horse. My horse is so fancy. Do not look at me. I'm leaning back so much. 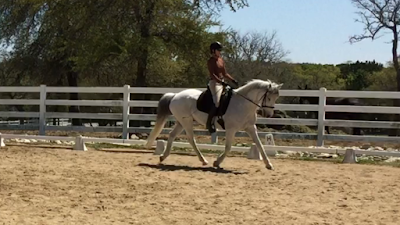 I don't think Taran knew he could look like this.

One thing that became really clear to me is how fake the left bend can be. My trainer is FOREVER on me about bending him too much to the left, even though I swear from the saddle he doesn't SEEM like he's bent at all (especially compared to the right). What he really does is crank his neck over without bending through his body, and I let go of the outside (right) rein to attempt to get more bend. Alfredo kept yelling at me to use more outside rein and open my inside hand, and I finally got to see what fake bend vs real bend looks and feels like. Lightbulb moment! I'm sure my trainer is doing a facepalm about now. 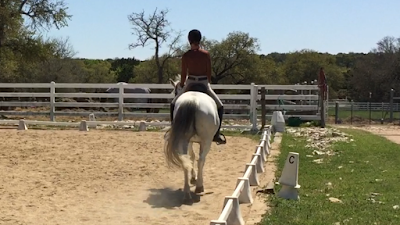 Not actually bent to the left, despite the fact that his ear is even with my knee.

Our ride actually ended up being quite short with a lot of walk breaks, but it felt really productive because we further solidified what we'd worked on the first day, and the added element of ground work made me feel like I had a really impressive new tool to help me out. SO much winning!

Here's some video from the end of our ride where we're awesome.