The moment you've all been waiting for... piaffe and passage! I mean, that's why we all sign up to ride with Alfredo, right?

It was honestly kind of anti-climactic. It's not like a horse that's never done those movements before is instantly going to be able to do 15 steps of brilliant piaffe with a rider on board. It's also not how you train that sort of thing. I was lucky to be able to watch Alfredo work with a number of horses over the course of the clinic, and his method was simple - you ask until you get the response you're looking for, and then you immediately reward. In some cases, I watched him warm a young horse up in the round pen, then ask once for 2-3 steps of piaffe, and that was it for the whole session. Literally, a 10 minute longe session with perhaps 5-10 seconds of asking for piaffe, getting a few steps, then immediately done.

It's kind of an interesting concept for those of us who ride and think "that circle was great, just ONE MORE and I'll be done..." and things start to fall apart. The take-away for me was, shorter session and more rewards when it's right.

My lesson started out with more in-hand work, this time with turns on the haunches as well as turns on the forehand. The goal was to get Taran stepping under and stepping around, with quick transitions  ("No stopping! Why are you stopping!!") between the two. I found it hard to keep Taran's feet moving AND be correct with my aids AND make sure he's correct. More practice is definitely needed on this - Alfredo made it look easy because his timing is so amazing, and I struggled so much.

At the end of our in-hand work, Alfredo took Taran and asked for piaffe along the rail. I didn't get the whole video, but Taran was confused about what he wanted so the first 10 seconds or so weren't very pretty ('Trot but don't move forward, WHAT? You crazy, mister!'). However, Alfredo kept asking and letting him take a few walk steps when he got a bit too tight, and eventually this happened: 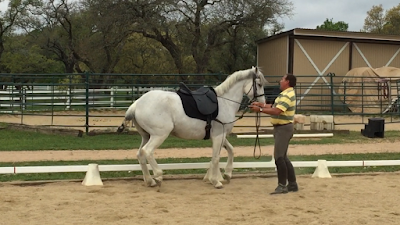 No really, it happened! Alfredo is already rewarding him.

Next up was ridden work. We kept it to walk and trot as before, and really just focused on him being round and through. We had some sticky bits (being round and through is HARD!), which we addressed by making him move his haunches (which is HARDER!), but we ended on a really good note, as we had on day two. I need to remember to keep the trot slow and round, and if he doesn't bend when asked, think haunches out. 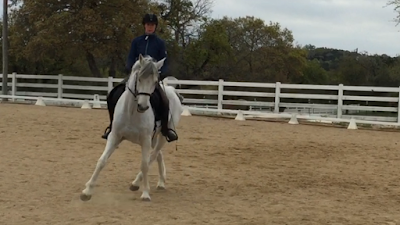 Moving the haunches creates some really spectacular laterals that I didn't know we could do. I don't think Taran knew he could do this either, lol! 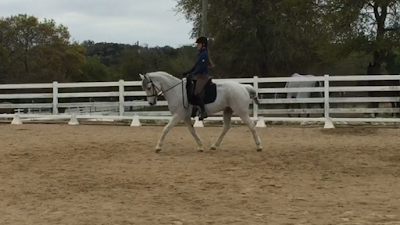 So fancy. Sorry about the ponytail, Aimee. My hair thingy failed halfway through.

As our grande finale, we took a few minutes to work on passage. Taran started off REALLY skeptical about this pole that was in his way, but Alfredo just encouraged him to keep moving forward and gently tapped his shins. You can see him starting to get with the program about halfway down the long side of the arena.

We walked for a bit, and then Alfredo asked me to trot:

Obviously we're not doing this at the FEI levels any time soon, but Taran got the idea and it was SUPER cool to ride! I think as he gets stronger in his back and more able to sit and step under himself, he'll find this easier to do. At this stage, we're just sort of playing with the concept. 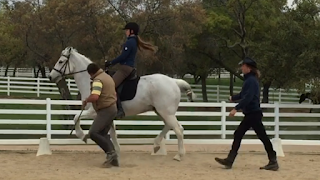 How many people does it take to get a horse to passage?


I've got a few more thoughts to share on riding with Alfredo (including a cool way to teach changes), but this post is already long. In short, he's very demanding of the riders but so rewarding to the horses, and we made some really big breakthroughs. I will definitely be signing up to ride with him again when he comes back!
Posted by jenj at 9:52 AM