The strange case of the escaped Haffie

Last night when I pulled up to the house after work, I immediately noticed something was amiss: Paddy was standing OUTSIDE our perimeter fence, in the greenbelt. Taran and Brego were standing right next to the fence on the track, keeping him company.

I couldn't grab his halter fast enough, and sprinted to get him. Was he hurt? How had he gotten out? How long had he been out? OMG WAS HE HURT??????

I don't have any pictures of him standing on the wrong side of the fence, because I was panicking and generally I don't take pictures when I'm panicking. As I ran to him, he started walking toward me, ears pricked as if to say, "Hi! I'm not sure what I'm doing here, but can you take me home now?" There was no blood. There were no scrapes. Our 5 foot perimeter fence was up. The 5 foot high front gate (our only gate) was closed.

But Paddy had gotten out.

As I walked him back to the barn, I called Fuzzypony. She had come out at 1 to pull Taran's sheet, and she confirmed that Paddy was in the barn at 1, and that she had closed the gate when she left. The gate was still closed when I got home at 5, so he hadn't been out for longer than 4 hours, which was good. Still, there's a lot of lush grass on the greenbelt, so I called the vet to ask what to do in case of founder. One dose of banamine later, and a (confused) Haffie locked safely in a deeply bedded stall, and I was able to spend some more time on the puzzle.

At first, I thought that Paddy had jumped over the perimeter fence from the track. But then I found a pile of manure on our front sidewalk, and I discovered that our interior fence charger had died (it was old, they tend to do this, a new one is on order). It was pretty clear that Paddy had slipped through the interior track fence into the back pasture, then wandered around the side of the house to the driveway.

But how had he gotten from there to the greenbelt?

I went to look at the tracks on the greenbelt. There was a single set of tracks through the tall grass, from the street back to where Taran and Brego were standing. There was a small patch of grass about 10x20 where it was clear Paddy had been and had lain down for a nap. Otherwise, there were no tracks in or out of that little patch. He'd clearly gone from the street back to his buddies, then stayed right next to them until I came to get him.

There are times when having a really herd-bound horse can be a good thing!

Based on the tracks in the grass, it's pretty clear that Paddy did NOT jump the perimeter fence. Instead, he went over or through the gate, east down our street, then around the side of our place to the greenbelt. I can't think of a single reason he'd jump the gate - his buddies were in the back, and he'd not willingly leave them - plus he had plenty of grass right where he was! Besides, he's athletic, but I don't think he's athletic (or motivated) enough to jump a 5' gate.

Which means that somebody opened it for him. (Normally, the gate requires a code, but yesterday the batteries were being charged so anyone could have opened it manually.) 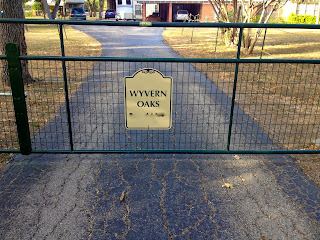 Apparently not as much of a deterrent as expected.

Here's the thing. Nobody was at our house between when Fuzzypony left at 1 and when I got home at 5. I called our neighbors and they hadn't seen anything. However, one neighbor mentioned that he'd found one of their donkeys out in the greenbelt a few weeks ago. Same story - all fences up, all gates closed. In 35 years of living in their house, nothing like that has ever happened.

So somehow, two equids with no history of escaping, no fences down, no gates opened, have escaped in the last month. That's pretty suspicious... and rather scary. I'm just glad everyone was returned home quickly and nobody got hurt. 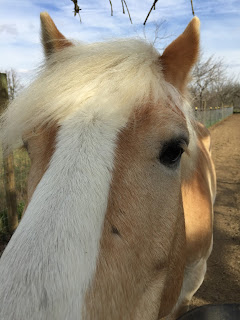 All Haffies present and accounted for. And hungry.

Soooo... anyone got any recommendations for a wireless security camera?
Posted by jenj at 8:59 AM