One of the more odd references I've found while reading 16th century riding manuals is riding with the left stirrup longer than the right:


“...it is the opinion of some, that to breake lances it behooveth a man at armes to have his right stirrop shorter than the other by two fingers..." Bedingfield p. 77

“It is not also to be disallowed, though to fight in combate or turnie, the left stirrop be made longer somewhat than the other: Bicause the rider is to emploie his right arme, and turne on the right side, in respect whereof the left stirrop would be longer.” Bedingfield p. 78 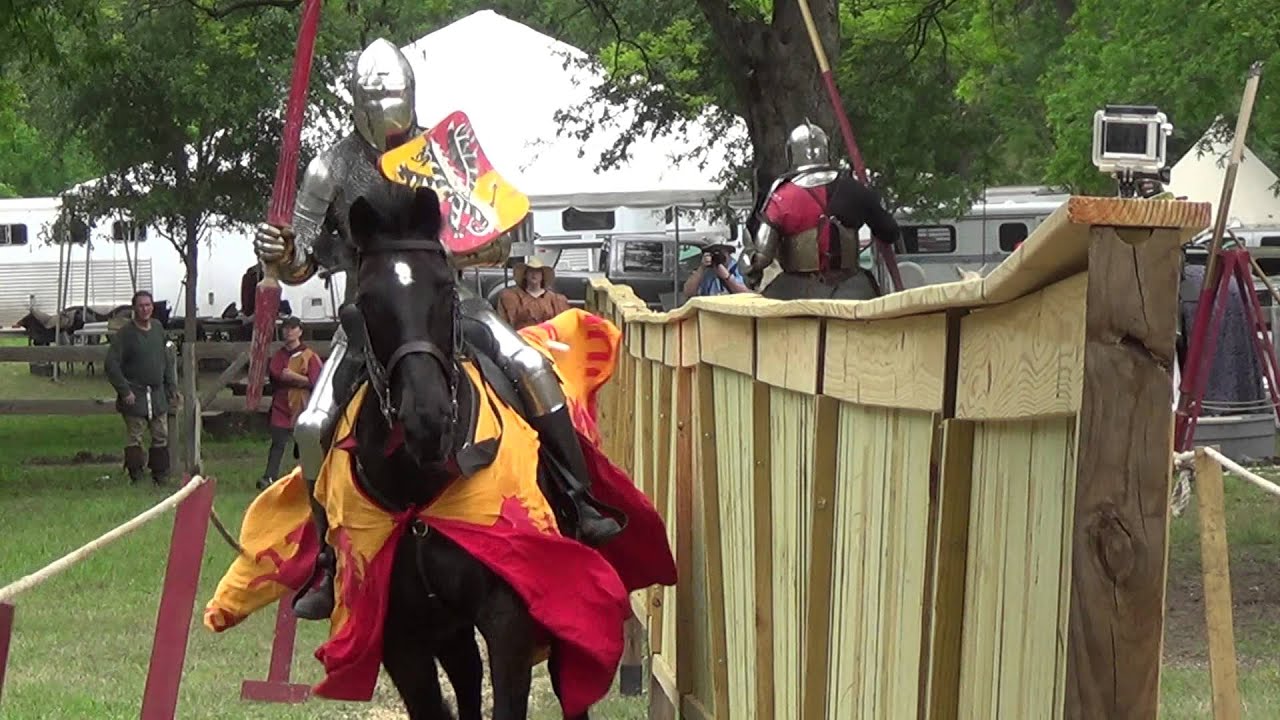 You can see why you might want a longer left stirrup - jousters tend to lean a bit left into the hit, and then get rocked to the right (as my husband shows here) on a really solid hit. A longer left stirrup might allow you to keep your weight more to the left and possibly avoid getting rocked - or even unhorsed!

Having mentioned that he has heard that some people recommend riding uneven, Bedingfield then points out why he thinks one should not ride with uneven stirrups. He reasons that it is contrary to nature, and that it is not  "comelie or justlie" - that is to say, it does not look good nor is it correct [just].

“Who so ever rideth with one stirrop longer than the other, doth seeme therein to proceed contrarie to nature, having made man two legs of one just length. Therefore if you make one stirrop shorter than the other, it is not possible you can sit so comelie or justlie on horsebacke, as if they were of equall length: or how can you use your spurs commodiouslie or evenlie? … Besides that, how can you with your bodie so conveniently help your horse in his doings? [If] you do not sit with your bodie just in the saddle, or rest your selfe equallie upon the stirrops, justlie counterpeised?” Bedingfield p. 76

He even tries to reason why one might think that riding with one stirrup longer than the other might be useful, but quickly points out that sitting unevenly causes the rider to commit all sorts of faults. He concludes that keeping one's weight evenly in both stirrups is the best option:

“… although it seemeth that leaning more on the one than the other stirrop, and that thrusting forward of the one shoulder, doth make the man stronger… yet it is certeine, that thereby he is the more apt to commit the errors beforesaid, by sitting loose in and uneven in his stirrops… [and] staieng his body upon both stirrops equally, [he] shall be better prepared both to assile and receive the incounter of his adversaire.” Bedingfield p. 77-78

Obviously the guy on the left was not prepared to "assile and receive" his opponent, but we'll never know if it was because his stirrups were uneven. Also, note that the guy on the right is wearing a flower on his head.

So the next time someone mentions to you that your stirrups are uneven, you can tell them you're practicing for fighting in combat or a tournament. Just make sure it's your left one that's lower!

Bedingfield, Thomas. The Art of Riding. London, 1584. Bedingfield was a Gentleman Pensioner to Queen Elizabeth I of England. He translated this book from the original Italian version (by Claudio Corte) at the behest of Henry Mackwilliams, another Gentleman Pensioner.
Posted by jenj at 9:48 PM