I've been super nervous about the show all week, because we've had nothing but rain since sometime last weekend. Trainer's arena is flooded, so I was stuck doing walk work on the road. Then Wednesday I got a bit desperate and called over to a place I know that has a covered and begged to be allowed to haul in. The owner agreed, so I got two "real" rides in on Wednesday and Thursday. They were kind of awful though - Wednesday Taran was sassy after doing nothing but walk work for a week, and Thursday he was clearly tired and sore from being sassy on Wednesday. 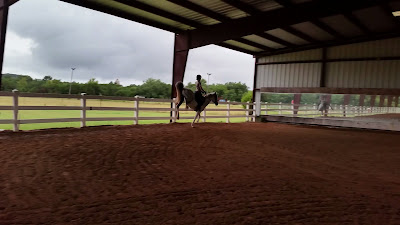 This is how he felt about having to work after a week of walking.

I gave him a gram of bute on Thursday night after our ride, and then took him to the showgrounds Friday after work for a short (but nice) ride. I double-checked the rules and then gave him another gram of bute Friday night, just in case he was still sore.

And then Saturday he was a damn superstar.

This horse, you guys. He gets in the arena and he's all business. Sure, I have to ride, and I get the test I ride, but he's so workmanlike and he just gets the job done. I'm SO lucky to be on a horse with that kind of work ethic. 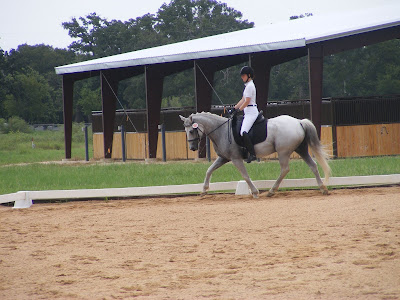 He'd probably have an even better work ethic if I let go of my left rein sometimes and didn't bury him in the corners.

For whatever reason, he thought the sand footing, which tends to be deep when dry, was just THE BEST THING EVER after almost 20 inches of rain. He was so light and fluffy and through (and I was trying to ride him lightly off my hands), it was kind of amazing. 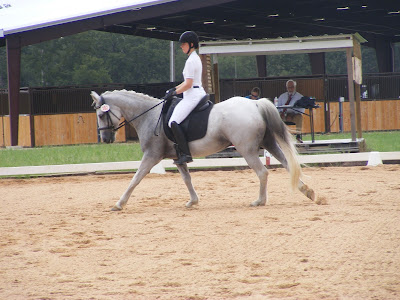 Look at me not getting left behind and keeping my hands down and letting him carry himself. For one stride at least. 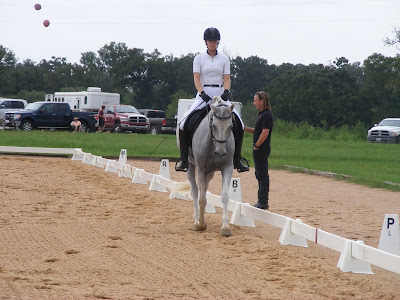 Also at the last minute I asked my dear darling husband to call my tests because I was super nervous. I luff him.

We did 1-3 and Tr-3, which will be the tests we ride at championships. While they weren't stellar, they were steady, relaxed, and consistent. We scored a 67.7 on Tr-3 and a 66.7 on 1-3. I left points on the table with a lack of square halts, trot lengthenings that weren't, iffy canter transitions, and some figures that weren't quiiiiite the right shape (stupid shallow serpentines). But considering what our rides were like earlier in the week, his performance was stellar, and all the faults were 100% mine.

Tr-3. Sorry, did not upload in HD and it's super blurry.

There were only 2 riders in the AA division for both tests, so we managed first place in both. We also ended up reserve in both the First and Training level divisions, behind two pros. And I'm not going to lie, I LOVE the giant ribbons at this show!!! 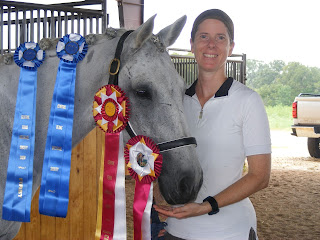 OH MY GOD HIS EARS ARE UP IN A PICTURE. Next time I need to put on a damn hat because hair nets are just not that attractive. It's always something. 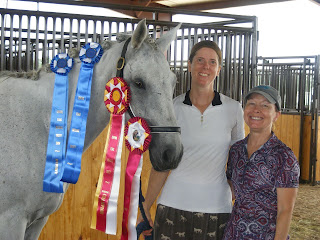 FuzzyPony's shirt + my cover-up pants are basically the best combo ever.

Many thanks to FuzzyPony for letting me ride her hoss (oh and also bathing and braiding him), MC for all the pictures, and Hubby for the moral support and test reading. Y'all are the best!
Posted by jenj at 8:57 AM