I mentioned a couple of posts ago that I've been researching dressage in the 16th century. Currently I'm reading (and in some cases, attempting to translate) all the books I can get my hands on. There are probably fewer than 20 surviving books on horsemanship that were written before 1600, so I have hope that someday I'll get through them all. Unfortunately, the majority of them are in Italian, Spanish, or German, so it may take me a really long time (every try to read medival German in Gothic font? It makes for massive headaches). Luckily a few were translated into English, and that's what I've been focused on thusfar.

Every so often, I come across a particularly interesting bit of information that seems worth sharing, so I've decided to start a series of posts on random bits of trivia. The first installment has to do with sweat scrapers.

Did you ever wonder how sweat scrapers got their current form - a long, curved metal "blade"? (Ok, if you're fancy you probably have a rubber one with a handle... I'm talking about the plain aluminum ones.) It turns out that the first sweat scrapers were swords!


"You shall ever when he hath ridden and cometh in much sweating, presently have him into the Stable, and first rub him down with clean wisps. Then taking off his Saddle, with a Sword-blade whose edge is dulled, you shall stroke his neck and body clean over, leaving no sweat nor filth that can be gotten out..." (Markham p. 21)

So if you ever lose your sweat scraper, just get out that trusty dulled sword you've got laying around. It'll work just fine! 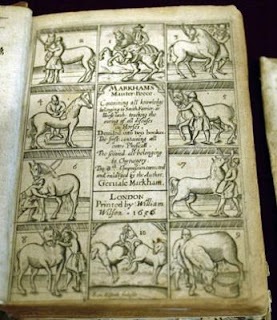