Today is 17 days post-surgery, and Brego's doing great. Earlier this week, we took him off bute and let him have a bigger turnout area (haha, it's like 12x12 plus his stall). Unfortunately, the additional movement caused some soreness, so he's back in his stall with bute on board. It's frustrating because the best way to get a hoof to grow quickly is movement, but keeping him comfortable and ensuring the hoof grows correctly (if really really slowly) is the most important thing.

Right now the biggest challenge I have (other than keeping Mr. SassyMcGiantPants from running me over - stud chains make for such POLITE Bregos!) is wrapping his foot every few days. He's a good boy for it, but goodness that is one big foot and there are a lot of steps! Plus, if he wants to put his foot down at a really inopportune time, I have to really hang on and do my best not to let him. Thusfar I've won all the wrestling matches, but we both know he's only humoring me.

So, what does it take to wrap a Brego? (warning, one somewhat squicky pic at step 4, but really, it looks so much better!) 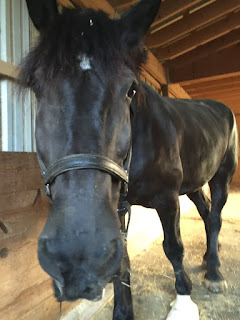 Step 1: Acquire one Brego. Try to resist when he begs for treats. Give him a handful anyway because he's so cute and you feel sorry for him. 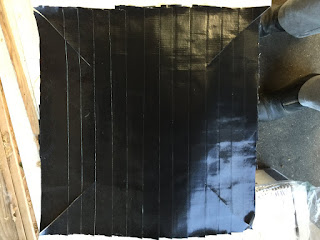 Step 2. Collect all your supplies (vetwrap, abdominal pad, gauze, ela$ticon) and make a duct-tape boot. This requires about half a roll of Gorilla Tape, because obviously Bregos can't use normal duct tape. 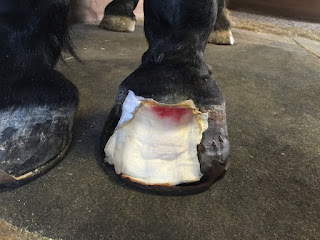 Step 3. Clean the floor as best as you can, then remove all the old wrappings. I bought bandage scissors to do this and seriously, you need some if you don't have any. Here I've removed everything except the gauze. 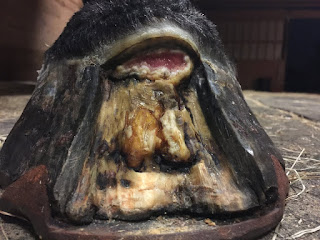 Step 4: Gently clean the area with saline-soaked gauze. Take pics and send to your vet. According to the vet, this looks "awesome"! And it no longer totally grosses me out either. 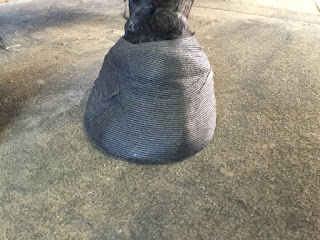 Step 5. Pack about 40 gauze pads in the resection site, slap a 5x9 abdominal pad over that, then use an entire roll of vetwrap to hold it all on. His foot is so big, I take the first two wraps of vetwrap while it's on the ground, and then pick it up and wrap it the rest of the way. You have to do this all at once so sorry, no pics of the gauze and stuff. 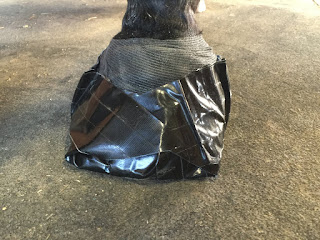 Step 6: Pick up his foot and apply the duct-tape boot to the bottom, then fold the sides up and stick them down. Neatness doesn't count much here. 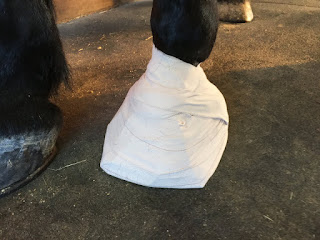 Step 7: Wrap that entire sucker with ela$ticon, being sure to get it well up on his pastern so that no shavings can get in. This is usually the part where he's done with me messing with his foot and we have our little wrestling match. I won this time.