That time I rode third level

Last weekend was our local dressage group's "ugly sweater" schooling show. At the last minute, I decided to sign Taran up for 3-1. I really wanted to get out and just try it this year,  since we can do everything in that test except the lead changes. So I figured we'd take the 4's for no change, and start getting used to the rest of the test.

T warmed up a little sticky, but it was cold out. We did a lot of small steps/forward/small steps/forward in the trot to get his hind end engaged, and we did a couple of "yee-haws" (as Charlotte likes to call them) at the canter to get him moving. He felt super balanced in the collected canter especially, although a little behind my leg. Still, he felt good to go and I was feeling like we could lay down a good trip.

Unfortunately, the moment we picked up the trot in the sandbox, I knew we were going to have problems. The footing at this facility is a little shallow in the competition arena, and he simply did not feel comfortable in it. When I asked for a medium trot, he did about 3 really good steps and then was just like "nope I can't," and I didn't push it. However, his trot half-passes (new at 3rd) got a 7.5 and 7.0, so I was quite happy with those. 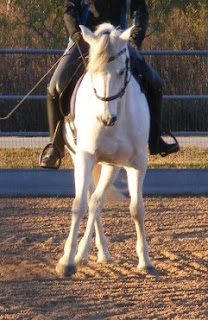 Good crossover, but leading with haunches and needs more bend

We got stuck AGAIN in the stupid walk TOH movement, both ways. Either we're too big or we get stuck for one step - either way, it's a 4, and that's a coefficient movement. We have done super good ones in practice, but for some reason I get in the sandbox and it just falls apart. ARGH! I seriously need to fix this because it's a lot of points. 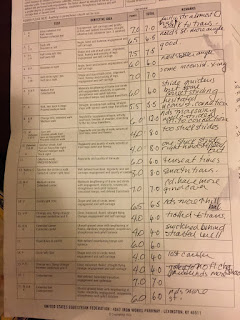 Our walk-canter depart got an 8 (ok I know it's a schooling show but who would have guessed that THIS HORSE would get AN EIGHT on a canter movement???) and our right lead canter work was pretty good. Of course we missed the change, and but then I let his shoulders get down and he cross-fired in the extended canter on the left lead. That killed the canter, the transition from extended to collected, and the 10m left canter circle. Whoops. We ended up with a 59.242%, and I've never gotten so many 4's on a test in my life. Good thing it was a schooling show? 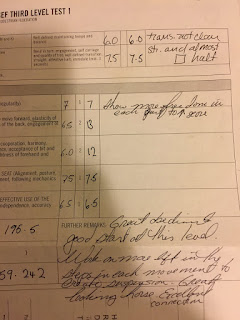 At least he was obedient

Overall, the judge was very complimentary of him - she actually made it a point to mention how good our connection was when I was scribing for her later. She mentioned that we need more suspension for this level, and she's right. That's something I just couldn't manufacture in that arena, and I'm pretty sure it was the shallow footing.

When we finished, I went back out to the warmup area and he was 100% fine - gave me a blazing extended trot and had plenty of lift. We also did a little more canter, and MC got this great moment of collection on camera: 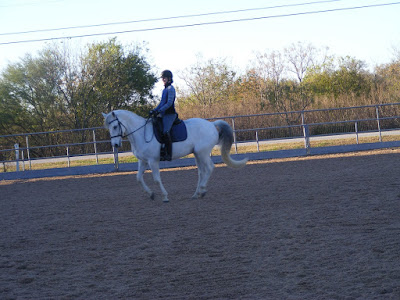 We were actually doing a baby canter pirouette step here. He's a little behind my leg, but he's so light in front and you can see how soft he is in the connection. <3 p="">

I'd say it was a good ending to 2017. Flying changes are gonna be the project this winter, so hopefully we can come out at 3rd in the spring, for real. I can't wait!
Posted by jenj at 9:10 AM