We are mostly ready for third level, except that we are missing flying changes. (OK, we also need better SI, and a real extended trot and canter, a legit TOH instead of a reining spin, and Taran STILL doesn't back, but whatever. Focus on the important stuff here.)

Fun fact - I've been riding almost 30 years, and I've never learned how to do a change. I mean, I know how to do them *in theory*, but I've never actually done one. I can ask for leads over fences, but the closest I've gotten to doing a change on the ground was last summer on a friend's horse, and then I only got the front. Taran doesn't have a clue how to do them either, so together we are obviously going to be awesome at this and get everything the first time. Har har har.

It never ceases to amaze me how many hunters have such amazingly easy, clean, smooth changes even as very young horses. In the dressage world, the thought seems to be that you need to have a really solid counter-canter (it's ALL OVER second level) before you teach a change - in part because horses who know how to change will sometimes flip when asked for counter-canter, because changing is easier. However, I've also heard of folks (ahemCharlotteahem) putting changes on a 5 or 6 year old and then leaving them alone for several years. Regardless, both T and I are way behind the curve here.

There seems to be lots of ways to teach changes. Figure 8 with canter/walk/canter is popular. I watched Alfredo teach them by doing canter/counter canter/canter on a 20 m circle. You can leg yield down centerline and ask for the change right when you make your turn. You can use a pole on the ground. I'm sure there are plenty more, too.

The thing is, Taran has gotten VERY GOOD at counter-canter. Like he can do a 10 m half-circle in cc. To him, a more balanced cc is always the right answer. That made my amateur attempts to try changes rather comical - he had no idea what I was doing flailing around up there, and simply tried his best to do what he thought I wanted. So we did a lot of very very collected counter-canter, and I lamented my lack of knowledge and thought that maybe I'd trained CC a leeetle too much.

Enter the pole. I had tried using it at home, and we'd gotten 3 nice changes over it, but I wanted to wait for my trainer before I did any more. So at our clinic last weekend, on the first day we worked a ton on getting more jump in the canter, and then we got out a pole.

It's probably important to mention that Taran is not much of a jumper. I can count on one hand the number of times he's been over a jump in his 15 years, and none of them were more than logs or crossrails. He's skeptical about jumping at best, and at worst will refuse to cross a downed fence pole that's 6 inches off the ground, despite there being a pasture full of green grass on the other side.

So. As we cantered down (shoulder UP!) to the pole for the first time, I focused on keeping my aids super clear with a tiny bit of shoulder fore, then straightening him and switching my aids, like I was asking for a walk-canter transitions the moment I was over the pole.

I should have known that a pole on the ground apparently needs A Great Deal Of Respect. 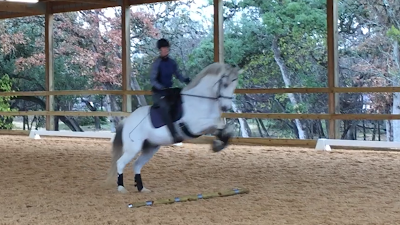 Definitely got the "flying" part of the change. My trainer nearly fell out of her chair laughing, because she's helpful like that.

We got the change despite Taran's overachieving leap, so we made a huge fuss of him and quit for the day on that.

For some reason, day 2 Taran warmed up super spicy. This meant he spooked at EVERYTHING. 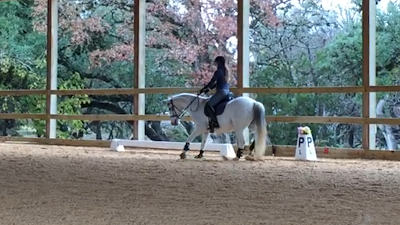 HOLY SHIT THERE'S A FLAT SPOT IN THE ARENA. Not even joking, this was where someone had left a few footprints while they were mucking.

He shook his head when I asked him for some leg yield (omg!), and even pretended to buck when I tapped him with the whip to ask for a bigger medium trot. 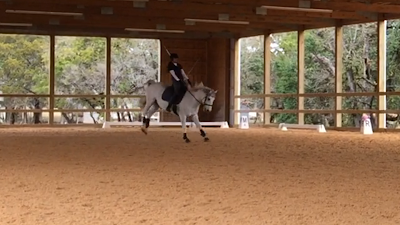 You should be impressed with how naughty he was.

BUT, his shorter steps (think precursor to half steps) work was SUPER good. He's really getting the hang of sitting down a bit, and I'm getting better at asking for it with my seat/body while keeping my hands light and forward-thinking. Actually feeling collection is kind of an amazing thing, y'all.

We also put in some killer shoulder in to trot half-pass. Ok, our SI on the center line still looks drunk - there are a lot of body parts to keep track of and you can't use the rail for support (not that I would ever do that, of course). But our half pass felt legit! It's so easy to get the haunches leading and/or let him fall over his shoulder, so I'm slowly coming to understand that half pass requires a ton of inside leg. More stuff to work on, but a good start!

Annd then we went on to do changes. Once again, the pole required a healthy dose of respect because it's actually an alligator or something.


The commentary from the peanut gallery (aka my trainer and my dearest darling husband) is amusing and worth the 18 seconds to hear. But if you don't want to watch the video, here's the important still: 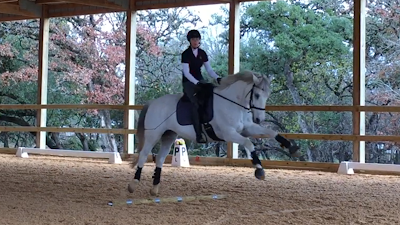 He was late behind on that change and uh, expressive up front, but you can see how he really gets lighter on his forehand two strides out. Good boy! The next pass through he offered a change (front only) about 3 strides out from the pole, which we gave him a lot of pats for because it's the first time he's tried to change in his entire life. We came over the pole a few more times, and he got the change every time, so we ended on a really good one:


My trainer assures me they won't be so... expressive... without the pole. But still! It's a solid start, and using a pole lets me work on timing my aids, and practicing my two-point. And here I thought my jumping days were a thing of the past!
Posted by jenj at 4:18 PM