At some point in the last year, most of my rides transitioned from walk/trot with some canter thrown in, to mostly canter with a little trot and a lot of walk breaks. I’m not entirely sure when that happened, but all of the sudden canter became something I was confident about - and of course, all the tough stuff we’re working on right now is at the canter.

Our trot warm-up is pretty quick these days. Some walk-trot-halt-trot transitions to get him quick off my leg and a little more up in front, then some shallow leg yields to get him moving his body and stepping up. I’ve found that cantering earlier in the warmup is better for loosening his back, so we do a few 20 meter canter circles each direction. After a little walk break, we might do some shoulder in and haunches in at the trot, a couple of 8-10 meter voltes, and maybe a few trot half-passes, mostly so I can work on setting him up correctly in the corner. If I don’t set it up right, I just end up getting in T’s way, but if I’m correct with bend and balanced, he can almost do the Grand Prix trot half-pass. And then… the rest of our ride is canter work. 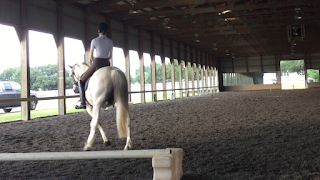 Sometimes my horse only has three legs, which explains a lot.

And there is SO MUCH to work on. I am endlessly trying to polish our walk-canter transitions, because while T is great at them, I inevitably forget some body part of mine and then it takes me two strides to reorganize. I do a lot of canter-walk-canter-walk-canter transitions on the quarter line, focusing on straightness and prompt transitions (spoiler alert, this shit is hard and we look drunk, I hate mirrors because they don’t lie). We spend a lot of time trying to improve the jump and quality of the canter, doing things like renvers, leg yield, spiral in and out, to help his strength and ability to sit. 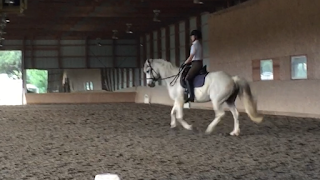 And there is definitely more sit!

Then there’s stuff like canter squares, where I turn his shoulders for two strides in each corner. When I get it right, I can really feel him balance back and his shoulders get super light and it's so easy for him... and when I don't, I'm basically hauling him around the turn. 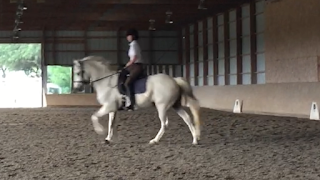 Our problems have a lot to do with me still not actually keeping my butt in the saddle for all three beats of the canter, but I'm getting better.

We work on cantering on the spot (ish, very ish), lots of forward-and-back… there are an endless number of exercises to use. I find it mentally challenging to process what’s happing under me and choosing the right exercise to improve it when I’m on my own – in lessons I can be more of a puppet and rely on my trainer to help me figure it out. 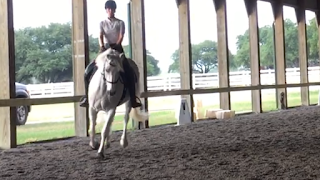 Like here I have lost his shoulders to the outside and I'm bending him too much with the inside rein. I need a more solid outside rein and a titch of outside thigh to ask his shoulders to stand up under his body.

And of course, working on the changes. That’s another post in of itself, because we’re both working on the change and working on NOT changing… which seems to be just as challenging! But we’re making progress, and for a sixteen year old horse that just started learning changes in January, it's pretty awesome. 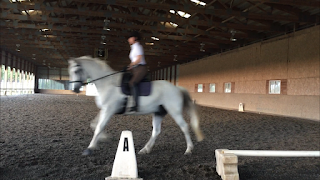 Not a change, but you can see that his inside hind is on the ground and the outside front is still in motion... a year ago he was landing outside front first. The canter CAN be improved, but it takes time!

Oddly enough, I don’t spend a lot of time working on medium or extended gaits any more. When I do, it’s more of a check to make sure he remembers how to do them. It seems that because we’ve been working so much on carrying and pushing power, when I actually ask for a medium gait, he’s up in his shoulders and absolutely pushing me out of the saddle from behind. I just have to keep my leg on, help him with balance if he needs it, and otherwise stay out of his way (hahahaohmygodthisissohard). It is incredibly cool to see how much his medium gaits have improved - not because we've been explicitly working on medium gaits, but because he’s gotten so much stronger.

How much of your ride do you spend at each gait?
Posted by jenj at 9:42 AM