Taran is usually the most reliable of horses (note: this includes reliably spooking at random things). He does what's asked, mostly without protest. Sure, sometime he doesn't put 110% effort in, and you do have to manufacture a lot of energy, but he's generally an amicable fellow. 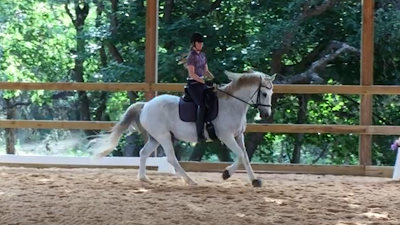 I mean, this is OK

Until now. Now, at 16, he's learned lead changes. Granted, they are still green, but he understands the concept and he knows the aids for them. He *also* knows that I might ask for a change at any time in the canter, and since he generally tries to please his rider, he's trying to figure out when I'm asking for a change and when I'm not. 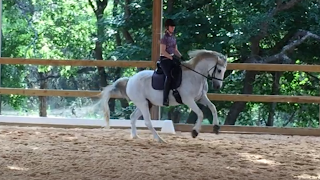 The problem, according to T, is that sometimes it's impossible to tell if I'm asking for a lead change or merely sitting there awkwardly in a way that maaaaybe could be interpreted as asking for a lead change, if you're an overachiever and trying to figure out what your rider wants. Let's be honest - until recently, I've asked for a canter lead and then sort of let my legs do their own thing until further notice. I'm particularly bad about letting my outside leg hang like a dead fish while pulling on the inside rein too much, overbending his neck. But I had to fix that habit when we started doing the 20 m counter-canter serpentine in 2-3, because you really have to make it clear that you want your horse to keep the lead in the cc. 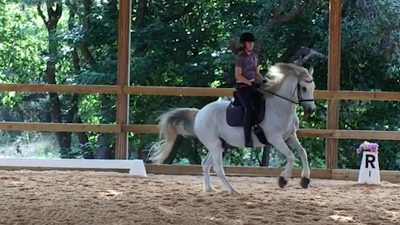 He's sitting so well and looks so fanc... 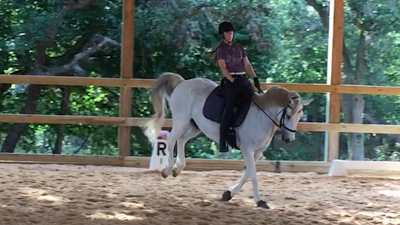 Of course, T didn't know about flying changes back then, so at worst I'd pull too much and get him overbent and a bit stuck, and he'd fall behind my leg and trot. But now... now, all those contortions I did or did not do with my body have a whole new meaning, and any one of them might mean I want him to change leads.

For example, I'm a pro at overbending T to the left, and letting his shoulders fall to the outside. What I need to do is use more right rein and push his shoulders a titch left, so that he stands up and is straight. But if I don't commit with my outside rein, it's ever so easy for him to pop his shoulder and toss in a change, or at least try to fake one. 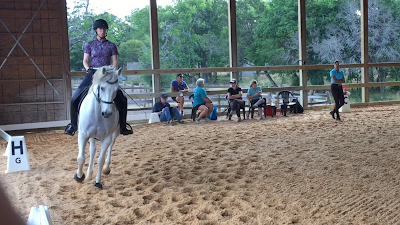 Over bent with the shoulder out. Or maybe I'm doing this on purpose because I want him to change leads, who knows?

I've also managed to break our left lead canter depart. If I get him straight on the right rein at the walk, and then ask for the canter, my left hip tends to roll forward instead of back... which moves my right hip back and presto, that's a right canter lead. Same problem in the canter... if I allow my left hip to get forward, my left canter aids are no longer clear, and he's suddenly questioning my riding ability and bouncing around in preparation for a change.

And heaven help me if I accidentally take my butt out of the saddle. I struggle to sit all three beats of the canter sometimes, and even just one beat out of the saddle and he can drop behind my leg and start bouncing. This is especially bad because I'm still in the stage of over-preparing for the change, so I tend to get him a bit too slow and up-and-down, which makes it hard to stay in the saddle. It's all connected, I tell you.

So, moral of the story. If your horse knows how to change, you'd better make DAMN sure you've got your leg, seat bones, reins, and other body parts all in their proper places at all times, because if you don't and your horse judges your riding like mine does, you too could be doing this doinkadoink maneuver pretty much anywhere. It just goes to show that all those "basics" like straightness and connection and rhythm and forward off the leg never, ever leave you. They just keep getting refined to the Nth degree so that you can perform progressively more challenging movements.

If you've done flying changes, what did you find to be the hardest thing about them? If not, what are you struggling most with in the canter right now and what are your tips for improving?

We did eventually get one on the aids, even if I did let my reins get long and him get a little down in front so that it's a half-stride late behind. Work in progress for sure!
Posted by jenj at 9:11 PM