Caring for a show horse with PPID (Cushings)

We immediately put him on Prascend, and in the last six months have since seen several dramatic changes. He went from being a lethargic horse to being much more energetic, often being rather exuberant at the trot and spooking for fun (which I’m glad about, because it means he’s feeling good). Whereas I struggled to keep weight on him all last year and some of 2016, this spring he’s gotten quite plump. His topline has filled back in, and he’s muscled appropriately for an almost-third-level dressage pony. 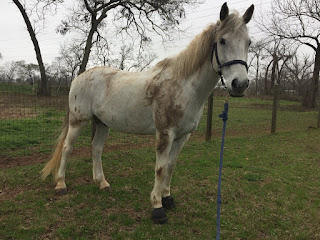 Even fancy fat ponies still love to get dirty

But… but. He struggles with regulating his temperature. He gets cold really, really easily. When I was at Nationals in November, I bought him a 400 gram fill blanket with a hood. I joked that I’d never use it… but it got used a LOT this winter, despite not having a particularly cold winter. He’d start shivering when the temps were in the 60s if there was a breeze and it wasn’t sunny. He now owns a very versatile wardrobe for weather conditions 70 degrees F and under.

I was hoping that we’d get a break this summer, but it’s actually worse – he’s started to overheat incredibly easily even though he’s getting body clipped regularly. He still sweats, but not as much as he used to, and even though he’s fit, trotting for 5 minutes has him breathing heavily. We’ve started doing a lot of walk work – mostly laterals – to work on suppleness and strength without doing him in. I’ve also started riding him before work, since it’s coolest then and sometimes we even have a bit of a breeze. We’re keeping our rides short and sweet, trying to make the work really count because I know I don’t have a lot of time to get it done. 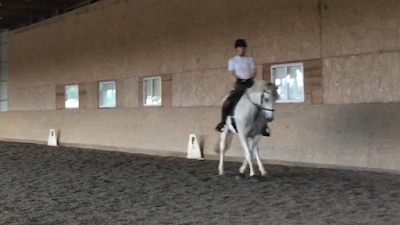 At least our walk laterals are getting better. Imagine how good they'd be if I would STOP LEANING OMFG.

The heat sensitivity is also affecting our travel plans. We recently hauled to our usual clinic, a two-hour trailer ride. It was about 95 out, and by the time we arrived at the, he was colicking due to dehydration. Some banamine fixed him up, but by the next day symptoms returned and he ended up with an overnight at the vet’s for fluids. He’s fine now, but it’s clear that I’m going to have to limit our travel distance and make sure we only travel during the coolest part of the day. Since I have to haul to lessons, this means that lessons can only happen in early mornings, which means weekends. It also means that showing during the summer, and much of the fall, is off the table. 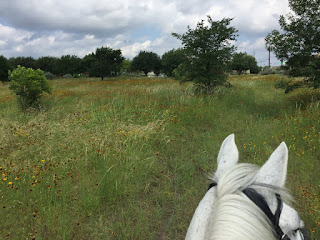 To attempt to address the dehydration issue, T is now on electrolytes. He’s always had free choice loose salt and a salt block, because I’m of the opinion that I’d rather let the horse self-regulate than force him to eat something he doesn’t need. I know the haffies use the lick, but I’ve never seen T try it. Anyway, do you know how hard it is to find electrolytes with no sugar? Because dextrose is the first ingredient in nearly every type of elytes… and guess what, PPID horses shouldn’t have sugar. The only option I could find was Summer Games, which was developed by several vets for the 1996 Olympic Games in Atlanta. It does have dextrose, but it’s the fifth ingredient, which is the best I could find. So far he’s actually eating them, which in of itself is a miracle. 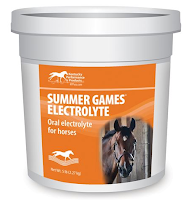 Because that’s another part of PPID… lack of appetite. We struggled with that before the Prascend, and it’s still an issue. He now refuses to eat the awesome flax-based Platinum Performance that he used to love  – he won’t touch it no matter what I mix it with. Right now, Triple Crown Lite (for vitamins), Renew Gold (for fat), and some soaked, rinsed beet pulp (for supps to stick to) is his mixture of choice. He’s quit eating carrots because I stuffed his Prascend pills in them (because I’m a horrible person, apparently), so now we have to dissolve the pills in water and pour it over the beet pulp. He’s also now on a vitamin E supplement to hopefully help his immune system, since PPID horses have a depressed immune response. Plus, since ulcers have been a thing, he’s trying GUT.  At some point I’ll see if he likes beer, because that’s good for anhidrosis and keeping weight on. If I can get him to eat the supplements without BP, I might take him off that, because there is some anecdotal evidence that BP may contribute to anhidrosis. At this point, I’ll try anything. In the meantime, I need a full kitchen in my tack room so I can prepare the right mix of All The Things. 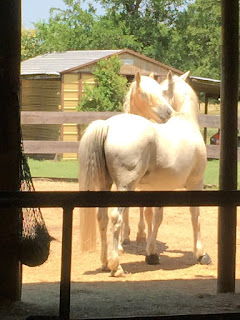 T is unconcerned with my attempts to get him to eat, as long as he has his haffies to groom.

(Does anyone else try their horse’s supplements to see what they taste like, or is it just me? SG has a very mild flavor and no smell, so I think it’s well-masked by the other stuff in his feed. The vitamin E supplement also has a very mild flavor. GUT, however, has a strong sweet smell and a weird taste, so we may not be able to stick with that. Time will tell.)


Sooo… anybody else out there have secrets to share on keeping their PPID horse fit and healthy? I’ll take all the tips I can get!
Posted by jenj at 10:44 AM