Has anyone noticed that "baby horse" has the same number of syllables as "baby shark"? Just saying. And if you don't know what I'm talking about, you definitely need to listen to this:

Baby horse, aka Leo, has been getting dragged to lessons, since Taran's still on holiday. We've been working on baby horse stuff, like steering and not slamming on the brakes. The colt breaker definitely put a good stop on this horse - it's so good that there's real danger of going off over his ears every time we do a downward transition. Subtle with the body, super soft with the hand, and lots of leg so he doesn't get behind seems to be the ticket. 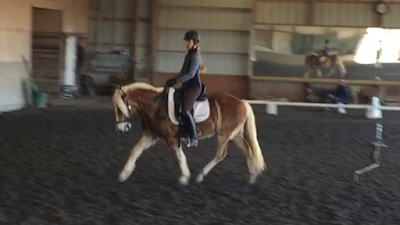 Keeping him in front of the leg while not running on his forehand is basically a full-time job.

Steering is definitely our biggest challenge. He loooves to throw his shoulder out, both going left and right, at specific points in the circle - we've, er, had a couple of near misses with the arena walls. We're addressing this with a fairly advanced (in my mind) exercise from Betsy Steiner - squares! We start at the walk and to a turn on the forehand in each corner. He's pretty good going left, but to the right there's one corner where he gets really sticky with his hind end, then often over-corrects and braces on the left side. It's a fine line between getting after him (yes you really DO have to move your butt) without escalating and scaring him/making him tense. We practice a lot of TOH/TOF in hand as well, and right is his more difficult direction, so this is just something we will be working on for a while. 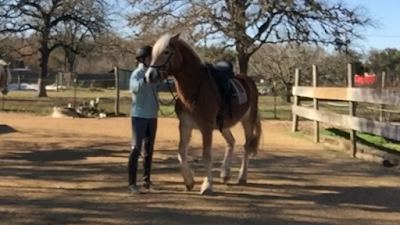 Working on a little walk leg yield in hand.

At the trot, we work a lot on pushing his shoulder in with my outside thigh while asking the inside hind to step under. My outside hand is low and very steady, even thinking a little counter-flexion. In reality I'm just keeping him straight and not allowing that shoulder to fall out. Inside hand asks for a little softness but is mostly just trying to stay out of the way. It feels a little like riding backwards, honestly, (aren't I supposed to be asking for inside bend???) but when we've got it all together, I can feel him straighten up under me and really step through. Also I can steer, which is nice lol. 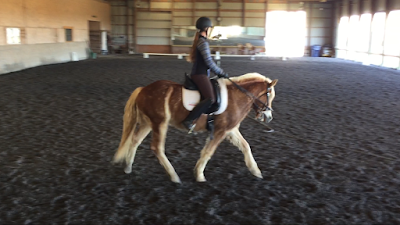 Here I am not doing any of the aforementioned things I should be doing. This is how we end up crashing into the arena wall.

I've also discovered that while I thought I've been getting more even in the saddle, I have not. See, Taran covers up my mistakes and we sort of even each other out. Leo doesn't have the balance or education to do so, so everything I do wrong is amplified times a million. He may actually be the horse that teaches me to let go of the damn reins and to sit in my left seatbone, because he quite literally cannot do the thing if I'm blocking him. Taran knows what I want so even if I'm blocking him, he still tries to do the thing. He's definitely earned his Wonderpony title. 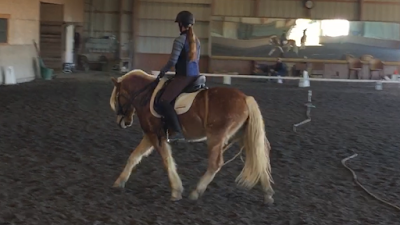 I've also finally been cantering Leo, since the footing is good and the arena is enclosed (ok and there's someone to dial 911). The first few times, we just asked for a bigger trot until he fell into a canter. Then I remembered that a lot of colt starters cluck for a trot and kiss for a canter, and wouldn't you know it, he steps into the canter pretty well with a little smooch noise. We need about a gazillion more transitions, and leads are definitely an issue, but there's no bolting or spooking or bucking or even head-tossing - he's got a really solid base. 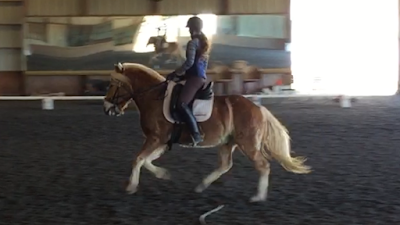 Despite riding 3rd level I have clearly not yet learned to sit my ass in the saddle. Or turn. Or turn while sitting in the saddle.

On the bright side, the kid has thrown in two (unasked for) clean flying changes in two different lessons, so I guess he's ahead of his big brother Taran there. 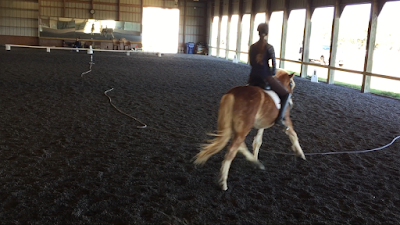 Also is better than Taran at fishtailing around turns.

He also doesn't leap the hose (which, after 6 months of riding 5x/week over the hose, Taran does at least once EVERY SINGLE RIDE), so like... good job kiddo? 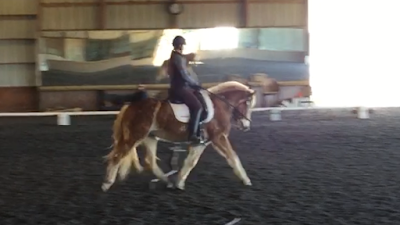 Calmly trotting over the hose while throwing our shoulder right. Total pro.

Of course, me reaching into my jacket pocket for a cookie is ABSOLUTELY TERRIFYING OMG, so it's not like he's perfect or anything. My trainer may have laughed at him quite a lot for that one. 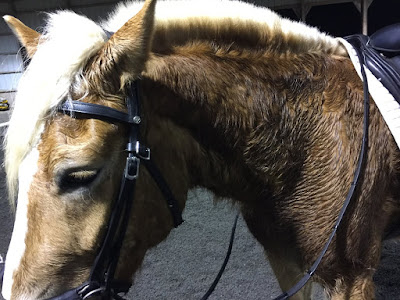 Being a grown-up horse is significantly more work than expected. Also this yak is gonna get a body clip in the near future because dripping sweat is just gross.

And just in case you're bored and want to see a video, this was at the end of our lesson where I had mostly organized the shoulders and got my legs in the right place doing the right thing at least some of the time.

Contemplating taking him to a local schooling show in February, just to get him going in that direction. I mean, how bad can Intro A and B be??? (Er, don't answer that..)
Posted by jenj at 11:05 AM