When Leo came to us last September, we knew he had decent gaits, 60 days at a colt starter, and he was very spooky and reactive. The first time I went to saddle him, he about had a meltdown over the saddle pad. He was terrified of the mounting block. He wouldn't move once you got on, and when you finally got his feet unstuck, he tended to scoot if you were the teeniest bit unbalanced. He also chewed the bit like it was his job. CHOMP CHOMP CHOMP. 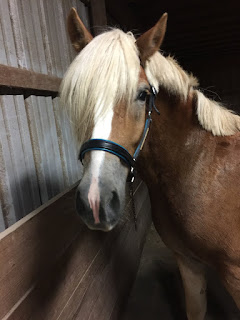 Pre-haircut days. He's now sporting a mohawk because I just could not with that mane.

Never having had such a young horse before, we were at a bit of a loss of how to approach things. My husband was gone quite a lot last fall and I wouldn't get on Leo unless someone was there (important for dialing 911, you know), so I ended up doing a lot of in-hand work. Walking, stopping, backing in hand. Trotting in hand (that was mind-blowing, omg). Turn on the forehand, turn on the haunches. Hanging out by the mounting block. Leg-yielding in hand. Anything I could think of, we did it in hand. 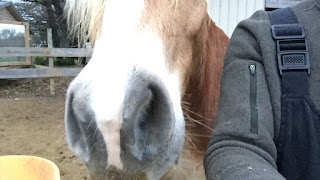 Once he figured out I had an endless supply of cookies and scratches, he also "helped" with the chores.

Initially, I used a halter, but I quickly decided I wanted something a little more refined. Last year when we visited Sweden, I'd picked up a cavesson to play with. It's not at all like the longing cavessons we have in the US, although you can use it for longing. It's a bit more like a bosal that western riders often use to start their young horses. It has a bicycle chain over the nose, but it's extremely padded (I only figured out it has a chain in there because I squished it really hard to see if there was any metal in the middle - there are also cavessons made with a solid metal noseband, so this one is quite gentle). It's made to fit snugly, and it doesn't rotate like a halter can. 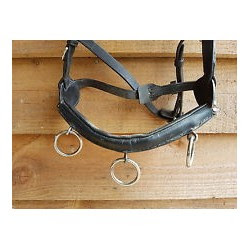 As a bit of an aside - apparently in the 16th century (and possibly earlier), horses were often started in a cavesson, which could have been anything from a rope nose to a two or three part serrated metal nose (modernly these are called serratas and seem to be used on bullfighting horses, google at your own risk). Trainers were supposed to teach the horse to stop, turn, steer, etc. with a cavesson before putting a bit on the horse, to save his mouth. The bit was gradually introduced, along with the cavesson, and then eventually the cavesson was removed entirely and the horse went solely in a bit. 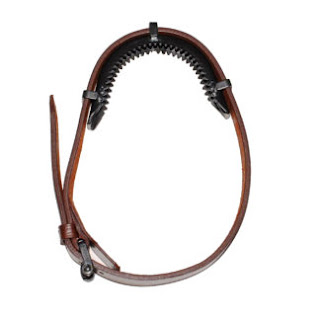 Modern serrata. I've seen Iberian horses (in Europe) with scars from these, so they are definitely still used. :(

I figured there was not only historical precedence for this arrangement, but I also know several folks who have started their "classical" horses in a soft cavesson and then transitioned to a bit. Clearly, Leo was not super happy about a bit, for whatever reason, so we took the bit out of the equation and worked with the cavesson alone. That actually went really well - he was able to relax, and we worked on the basics of How to Horse (stopping and turning on request is important, yo). 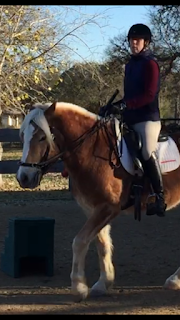 Cavesson and bit in action

About a month ago, we decided to go ahead and start riding him with a bit as well. Of course his favorite bit is the French link Neu Scheule off Taran's double (couldn't go with the cheap option, could you Leo?) I just stuck the bradoon hanger under the cavesson, and volia! Fancy baby horse transition bridle. 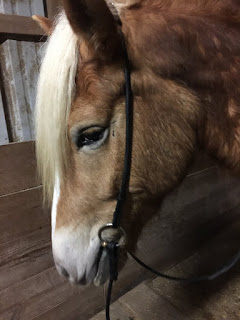 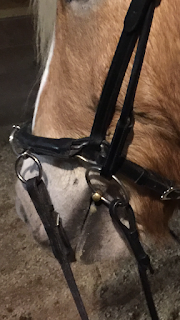 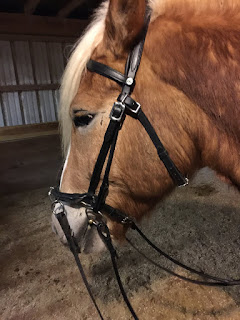 Here's what the whole thing looks like. I'm actually getting used to handling the double reins!

I'm very glad I had a chance to play with this option, because it's working great for Leo. At the beginning of the ride, I use the cavesson exclusively, and I pick up a little more feel on the snaffle as the ride progresses. He's able to get used to carrying the bit without actually having it do anything, which seems to be helping with his acceptance of it. 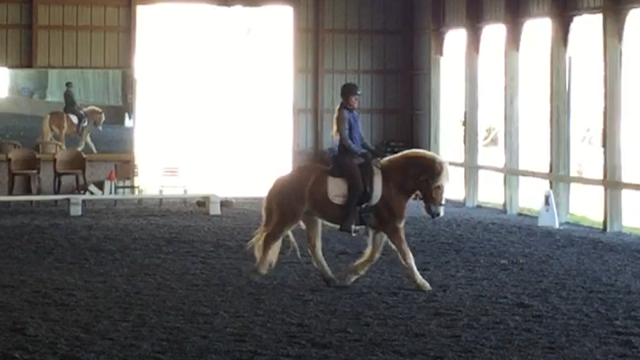 Sometimes he even looks quite fancy and grown-up!

Have you ever used a cavesson before, either to start a young horse or as a bitless option? Curious to hear about your experiences!
Posted by jenj at 12:03 PM