Today was an amazing day!

The entire family who was here for Thanksgiving, plus a friend from Midland, helped on the house today. We got an amazing amount done, and I want to thank everyone so much for helping out! 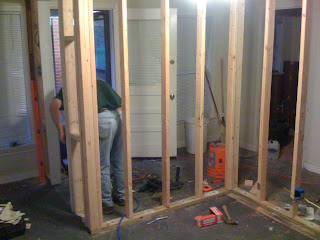 The hubby and the brother-in-law, CS, finished framing the wall today. CS also re-ran several lights so that the switches are in a more logical place. He also ran new sockets for the new wall, which you can see in the bottom right corner. Wow! 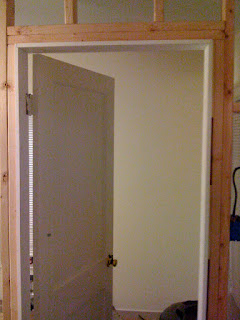 They also got the interior door into the new bedroom installed. Now all we need is drywall! Ok, and some more electric, and to re-lay the carpet... but we're getting closer! 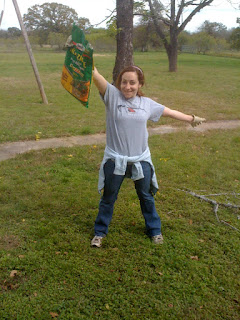 QQ's quest for today was taking care of all the ant mounds that I missed. She probably treated another 50 mounds! 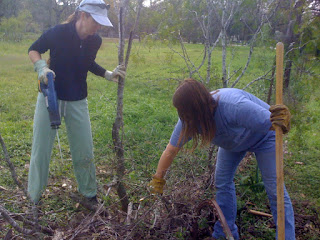 We also did a TON of fence work today. Here, Britta and I work to remove a mangled t-post from the fence line so that we can repair the fence. I spent a lot of time with the reciprocating saw taking down branches and small trees (mostly mesquite) that were growing on the fence line. I also put caps on all the t-posts in the back area where the horses will go and re-attached the predator fencing where it was sagging. VE and Britta took down all the barbed wire on the property (YAY!!!), and QQ and company filled in a bunch of holes where fence posts were previously. 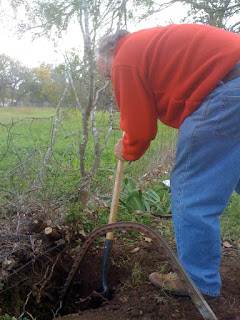 The bent t-post proved to be the challenge of the day. Here MS tries his hand at digging it out. He also dug up and removed all the Lantana, which is toxic to horses, as well as all prickly pear cacti. The property is got a whole lot more horse-safe today! 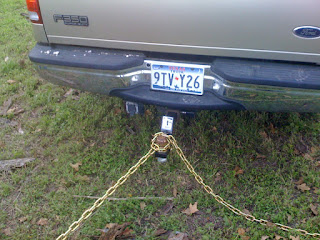 Finally we decided to try pulling the t-post out with a chain on the truck. That helped work it loose a bit more, but we still weren't able to get it out of the ground. 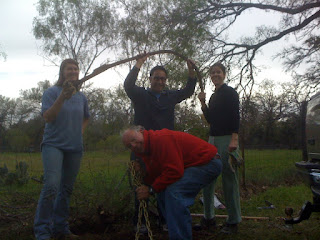 Finally, success! It took 5 of us and about 2 hours, on and off. Fortunately there was only one of them! Britta and I fixed the fence after we got the post out. 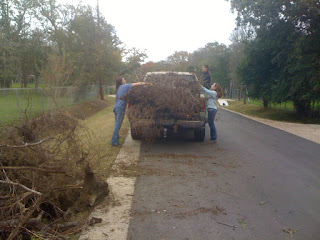 Another huge project of the day was cleaning out the brush piles in the back. We actually got all three big piles and a few smaller ones (there are still some rocks and pieces of metal the need to be removed, but that's for another day). Here we're unloading it from the truck into a pile onto the street. 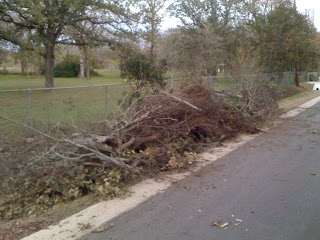 The final brush pile on the street. Yikes! I tried to call the city about taking it away, but they were closed today. I'll call them Monday to make sure they'll take it. 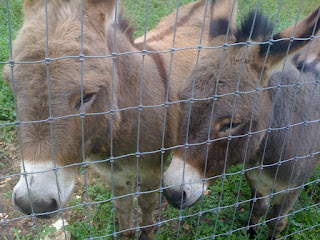 Our new next-door neighbors. Not sure what their names are... we're currently calling them Thing 1 and Thing 2. Someday soon I will go knock on the neighbor's door and introduce ourselves so we can find out the donkey's names. I wonder what the horses are going to think of them?
More stuff tomorrow - pulling metal out of the yard and maybe starting on the drywall in the bedroom. Thanks again to everyone who helped today!
Posted by jenj at 8:35 PM