Another day, another huge amount done. We had so much help again... thanks so much to everyone who was here today and spent time working!

I tried to take a bunch of pictures today to document everything we did... so here goes!

The hubby and the brother-in-law spent all day doing electrical stuff. 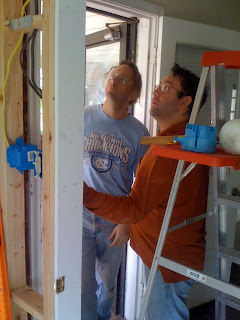 Early in the day, putting in boxes for a new switch for the hallway lights. 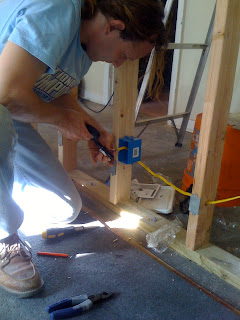 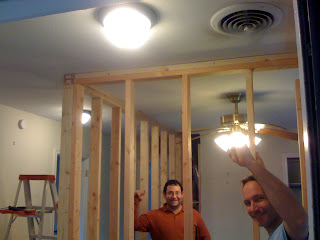 The final product - two lights in the hallway connected to two switches (one by each door), and the light in the bedroom works too! It took way too long to hang the light fixtures, but we finally got it done. YAY!

The hubby spent significant time crawling about the attic running new electrical lines. While he was up there he framed out the area right above the furnace so that we can put in fireproof sheet rock above it. We got the sheet rock as well but haven't cut it and installed it yet. We also discovered that the furnace doesn't actually vent to the outside, it just vents into the attic. There is metal shielding above where the vent is, so I guess it's OK for now, but there is also some leakage around the shielding. So, we're trying to figure out how to put a vent in ASAP since this seems like a bad idea in oh so many ways. Not to mention the leaking roof... ack. Fix one thing, find three others that need attention! 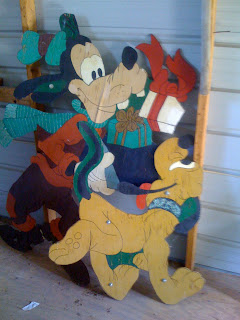 We finally explored the shed (which needs the hinges fixed) in back in detail, and found these fantastic circa 1950's Christmas decorations! Goofy and Pluto... 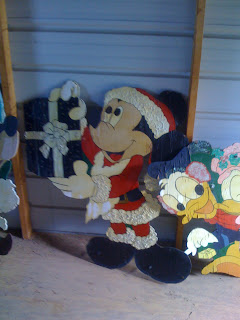 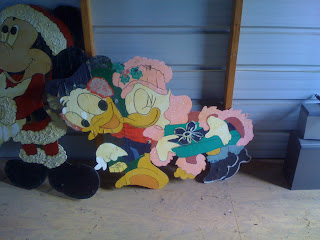 ... and Donald and Daffy. Everyone is lobbying to put these up in the front of the house. I am staunchly against it. :)

I saw a couple of cool bugs today... gotta look them up and find out what they are! 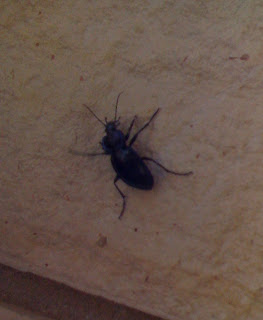 Large black beetle. He was probably an inch long! 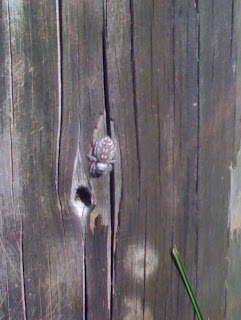 Cool fuzzy white and brown spider I found on a fence post when I was hammering in loose nails. He was a pretty good size too! 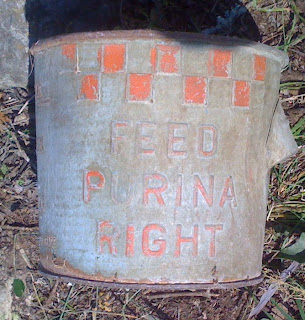 MS found this old Purina feed scoop while digging out an iris patch in the middle of the yard. It would be really neat if I could figure out how old it is! 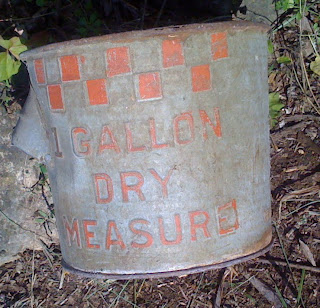 1 gallon dry measure. Just for the heck of it, I might have to use it to feed the horses! 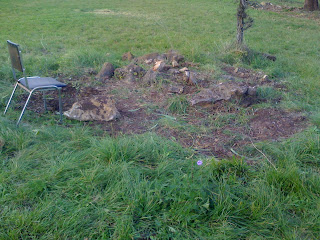 Here's what's left of the iris patch after MS cleaned it out. We had to remove the irises because they are apparently toxic to horses. Fortunately we have other patches of irises on the property so we'll get to see them in the spring. 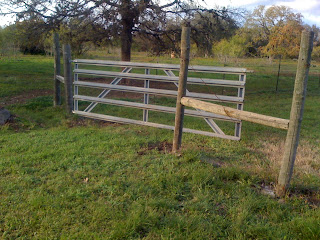 Britta and I hung the gate this morning, but it still needs a few bolts for the hinges, a chain for the latch, and probably a wheel for the bottom of it so it will move better. 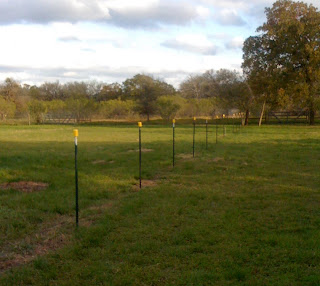 Britta and I also put the t-posts in for the new fence line across the yard. 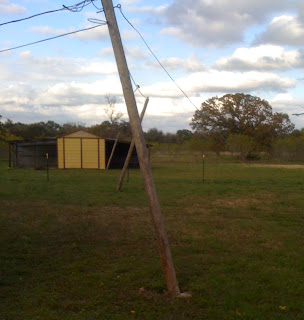 A project for the near future - I'm not saying that I can tell when things are super straight (see the new fence line), but these electric poles that provide the shed with electricity look a little off to me... 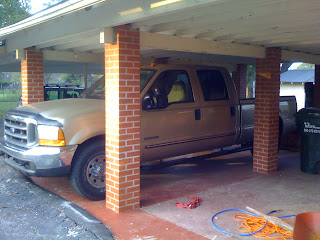 Totally random... the hubby swore we couldn't fit a truck in the carport. I have proven him wrong. Granted, it's not OUR truck and it's not ALL in the carport, but I got it to work! 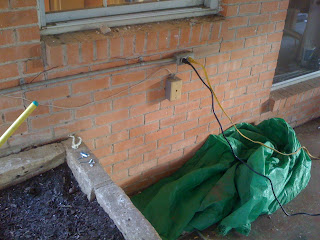 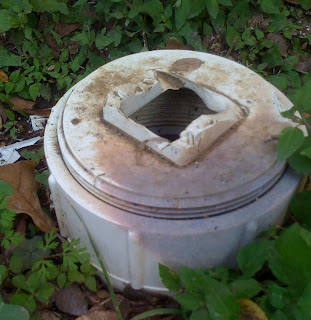 I tried to replace the broken sewer pipe caps today, although as it turned out I couldn't get any of the caps off. Nearly all of them look like this... 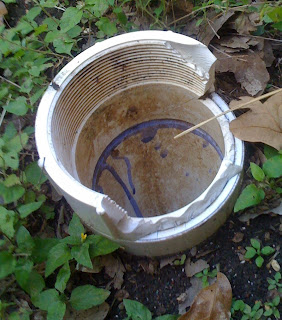 ... or like this. I finally figured out that they've all been run over by a riding lawn mower. Nice. Somewhat later in the day we had another neighbor stop by who mentioned that he had mowed the lawn with his Kubota (a big lawn tractor) some time ago for $80... I had to resist asking him if he was the one who had run all the sewer lines over! :)

We also discussed electrical wiring today. I think we're going to have to get the electric company out to re-run power from the street, since it's likely that we only have 60 amp power and we likely need 200 amps, especially since we'll eventually be putting in a barn and lights for the outdoor arena, not to mention the addition to the house. Hopefully when they do that they'll give us a new meter that's NOT built into the wall of the house, so we can brick that up and not have a huge gaping hole to the outside letting in water. We're also going to have to get a new panel put in sooner rather than later.

Tomorrow the hubby and I are going to try our hand at hanging drywall. We also have to move a pile of metal out of the back and find a way to recycle it. If we get bored with that, we'll continue demoing the pink bathroom.
Posted by jenj at 7:47 PM