We got a bit of a late start today; I rode in the morning, helped Fuzzypony take a truckload of stuff to Goodwill, then picked up a new Queen mattress from Craigslist, which we'll use initially for staging our house to sell and then later in the guest house. We didn't get to the house till nearly 2, unloaded tools, boxes, and the mattress, and then I headed straight to Home Depot to pick up a few items.

As we were unloading, the hubby noticed a black cat on the sidewalk in front of the house. I didn't get very close to him before he sprinted around the side of the house and disappeared, but he appears solid black with pretty green eyes. I had noticed a dish by the kitchen door - perhaps that's his? I couldn't tell if he was in good weight or not, but later in the day I noticed a pile of feathers out by the back shed that hadn't been there before. I think the house comes with a cat, and he's hungry. I'm going to pick up some kitty food and leave it out - I like the idea of having a cat to keep things like mice away, but I don't want him eating the birds!

Today's projects included more demo of the pink tile bathroom. The hubby took great satisfaction in swinging the sledgehammer and was MUCH more effective than Fuzzypony and I were yesterday. He got almost half of the bathroom cleared of tile - just the shower and toilet area are left. We need to figure out how to dispose of this stuff, because we quickly filled the trashcan with debris. We'll be making some calls tomorrow so that our progress isn't impeded by the amount of trash we can haul off! 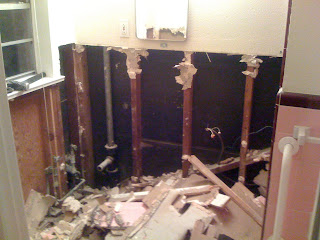 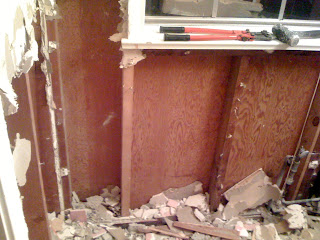 The sink used to be right here... now we just have studs and the outside wall of the house. 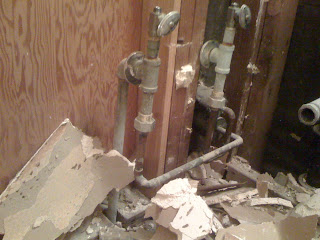 We're trying to figure this plumbing job out. The waste line is on the far right of the picture, and the hot and cold water in the middle. See that black box to the right of center? Both the hot and cold pipes seem to go into that box after being routed through the valves for the sink. The water's coming in from the lines in the slab (the ones going straight down)... but what are those other lines going to? Looking at the outside of the house is no help - there's a big brick planter box right on the other side of that wall. If anyone has any ideas where those pipes are going, drop me a line!

We also finished most if not all of the demo in the utility room. We drained and pulled out the hot water heater (this one sentence makes it sound easy. It wasn't... it took us a while to figure out how to drain it, get the hose going, etc., but we got it done!) then ripped up the rest of the linoleum and the baseboards, since we're planning to put in tile for the floor and bullnose for the new baseboards. The picture I took of the finished utility room was blurry, but here are some others that turned out. 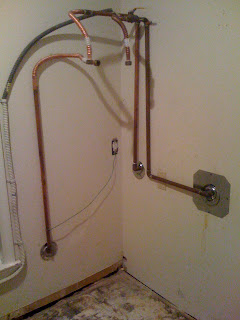 Here's what's left after pulling out the hot water heater. Electric line, cleverly run under the window and fastened to the wall. Cold water in, hot water out (that's the metal plate on the wall on the right). And the overflow pipe to the outside. We've gotta cap all this stuff off and remove it since we'll be installing a tankless hot water heater outside the house. City, state, and federal rebates make it pretty inexpensive to get a new water heater. 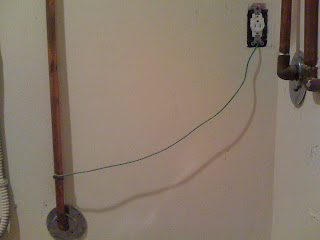 Close-up of a fancy wiring job. The pipe seems to be grounded, but we can't figure out why. Anybody got a guess? 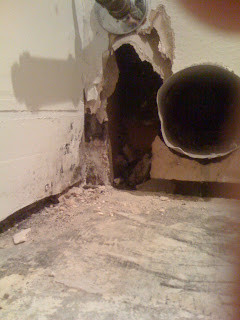 Dryer vent to the outside. There's water damage to the wallboard here but the studs seem in good shape. The electric meter is actually directly above this vent, and it's basically a big hole in the wall directly open to the weather. We suspect this is the cause of the water damage and will be working on a way to make the meter more weather tight to prevent future damage. 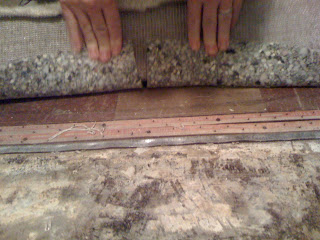 Last but not least - when we pulled up the last of the linoleum, we peeked under the carpet into the area that will become a hallway... and we found those nasty square stick-on tiles! Argh! I thought we were all done ripping up flooring for now, but apparently not. In the near future we'll pull up the carpet in the area where we want to put in hard tile, then I'll start ripping up the squares. Ah, fun!
The respirators I picked up were really great. Even if there's nothing in the dust we're making, we're still breathing in the dust, and these things are amazing. The look is less than classy, but I guess we're not going for a fashion show here: 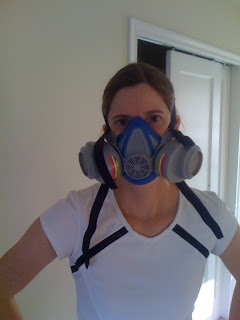 New for the fall 2009 fashion season: respirators! Add one to your wardrobe today!
I also spent some time treating fire ant mounds. I lost count of how many I treated, but probably between 30 and 40... and that was only maybe a quarter of the property! I'll continue to treat them during daylight hours, but probably won't get to them again till later this week.

Tomorrow I'm meeting the arborist and termite guy at noon. We'll get the final bid for termite treatment and then make a decision; we're hoping to have the house treated by this coming Friday. I can't wait to evict the little suckers!
Posted by jenj at 9:00 PM