A fabulous weekend of riding

This weekend was fantastic for riding!

Saturday, hubby and I enjoyed a great jumping lesson with Paige at Couraggio Farm. As always, she gave great pointers and had a wonderful sense of humor (especially since we're not actually H/J folks)! Hubby and I switched horses, so he rode Saga and I rode Reddums.

I would like to point out what a great job Saga did taking care of my hubby. This is just a short video clip from the end of the lesson, but the improvement he showed in just one lesson was amazing! I'm hoping to convince the hubby that we can do lessons more regularly... MUCH more regularly!

I was somewhat less successful with Reddums. He's very hard to rate to fences as his canter stride is really not very adjustable. He also is not in great shape right now (although he would argue that Round is a Shape) so he has a harder time carrying himself. If I let him get flat and quick, he can't take the short spot, and he absolutely cannot put in a long spot to save his life... and you can see in this video (the first fence anyway) what happens when the pilot screws up royally.


Oh well, he tries hard and he's really fun to ride. He's teaching me to wait and not run at the fence, which is what I got used to doing with Cash (or rather, Cash would run and I would do my best to sit still and not get in his face - which would just make him run more.). I have a lot to learn, that's for sure!

Sunday we had the first jousting practice of the year in preparation for Lysts on the Lake, the largest Jousting tournament in the world, in early May. Last year the hubby rode Reddums, but the armor is heavier than ever, and most of the horses being used are drafts or draft crosses, so this year he's planning to ride Saga. Training a horse to joust takes a lot of time and patience, and a lot of baby steps - you know, sort of like training them to do anything else! They have to get used to having their rider carry clanking armor and waving a lance around their heads. They have to be OK with facing down another horse charging almost directly at them. And they have to stay straight and not shy from the line, even when the opponent's lance strikes their rider and shatters - loudly. None of this is easy, even for the boldest of horses, and Saga is not overly bold!

We've trained a number of horses to joust, and one thing we have learned is everything in baby steps. One of the first things we do is to get a horse accustomed to having the rider carrying something that's going to be moving over their heads. Horses do get bumped accidentally, or toss their heads into the lance occasionally. We bump them all the time on purpose so that it's no big deal when it happens. Here Saga demonstrates what a jousting horse has to put up with. 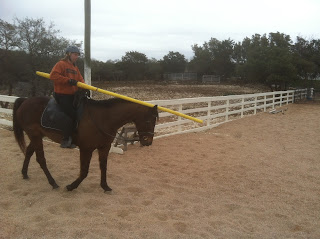 This is the dumbest hat EVAR, dad.

And although Saga won't be doing mounted combat, we also spend a lot of time walking/trotting/cantering around hitting posts and fences and such, so they get used to the sound of an impact happening over their heads/backs. Here hubby demonstrates smacking a quintain with a sword. 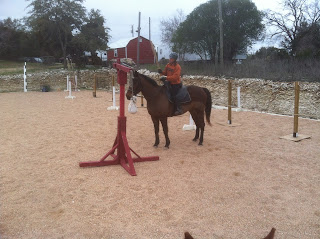 Saga wasn't too sure about the sounds related to stuff being hit, so we moved on to something he was more  comfortable with. 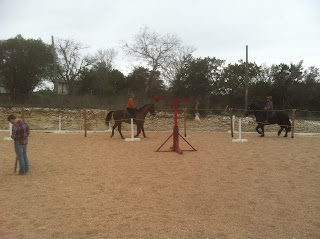 Next, we practiced making passes against another horse - no lances, shields, or armor, just going head-to-head at a walk, trot, and canter. Saga has always had issues with this in the arena, so it was a little harder than it seems it might be. The big black mare he was up against is also a bossy one, but after a few runs he was going against her steadily. Good boy! 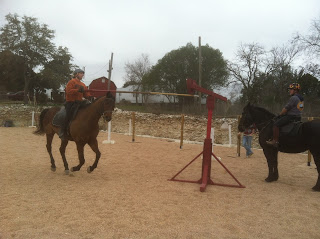 Finally, hubby did a number of passes at the quintain with a lance, starting at a nice relaxed walk. Eventually they worked up to a trot, and finally did a few rounds at a relaxed canter. Yay! Here hubby exhibits lovely form (and Saga's doing great too!) while accidentally missing the quintain. Oops!

We are very much looking forward to more weekends like this - jousting practice will be a regular thing until May, and hopefully we can squeeze in more jumping lessons too. I'm really excited to be able to do this after so long off!