After yesterday's exciting flooding episode that resulted in us having to pull up the entire kitchen floor in the guest house, today was rather more successful. We salvaged all of the laminate floor except one board, where the edges were too badly damaged to reuse. Fortunately we'd bought extra flooring so getting a replacement piece was not a problem.

The floor and cabinets had dried out overnight, so we finished re-laying the floor this afternoon. After that, we got the baseboards (which was the start of this whole project) laid in. Yay! Dad also did a bang-up professional job putting the end cap on the formica countertop in the kitchen, so it's really starting to look finished! We still have windowsills and transition flooring pieces to put in, the trim all needs a touch-up coat of paint, and there are a few other odds-and-ends that need to be done, but having the guest house completed is in sight. It sure will be nice to knock that off the list!

Once we'd finished the flooring and baseboard project, my dad gave my hubby a "Soldering 101" lesson to repair some wiring that Anie had broken in one of her terrified-of-thunderstorm moments. Hubby's comment was, "It's like welding, only much, much smaller!" Of course they had to go to Home Depot to purchase a soldering iron, so we have another 'power' tool to add to the collection. Not that anyone is complaining, mind you.

The final project was to learn how to glaze windows. Part of the house has really nice wood-paned windows, but the glazing has all dried and cracked, and most of it has fallen out. We had someone who was supposed to reglaze and refinish them for us, and... well, he did a great job right up until he stopped showing up (long story, not worth telling). Dad has done glazing before and offered to show us so we could finish up the work... turns out, it's really pretty easy to do, and if you liked playing with play-doh as a kid, you can glaze windows without a problem. 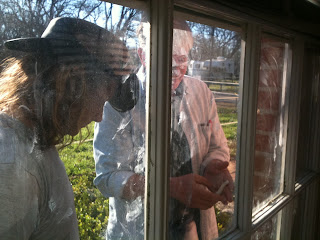 Glazing putty is available at your local hardware store. You want to start with a clean surface of both the window and the frame. Dad demonstrates how you take the putty and roll it into a long ribbon between your hands. 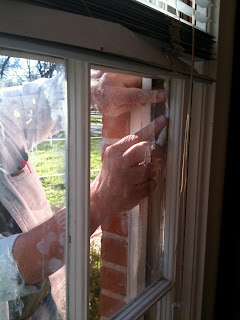 Next you sort of smoosh it into the groove between the window pane and the frame. This is the fun, squishy part. 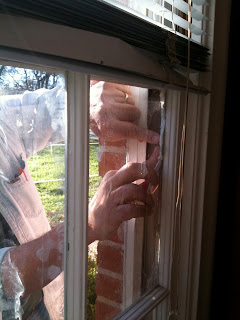 Keep smooshing is down the window pane until you get to the corner. Use your finger to smooth it out a bit, then clean the window with water and vinegar.

We didn't get quite as much done this weekend as we had planned, but considering we managed to rip up and rebuild a kitchen floor in the mix, we didn't do too badly. We have a lot of other small projects planned for this week/weekend, so hopefully we can knock those out quickly.
Posted by jenj at 8:40 PM