So I'm a few days behind with this post, but I just got access to some of the pictures taken at the practice this weekend.

Saga was apparently a Very Good Pony! His biggest challenges to date have been the sound of armor on his back (it's clanky) and the sound of the lance hitting its target. Currently the target is a quintain, but eventually it will be another jouster's shield.


The hubby picked up where he'd left off after the last jousting practice, with making passes at the quintain. He started from a walk, then went to trot, then finally canter. Saga did much better than the first time and was apparently much more confident. 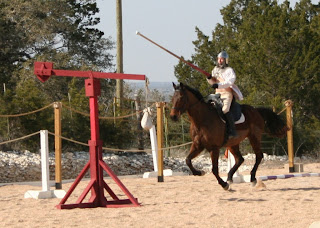 Next, hubby got out his helm with the clanky chain mail aventail. This was causing a lot of problems in their ride last Wednesday, but Saga settled down quickly this weekend. He was so good that hubby added his steel breastplate to the mix, which is even MORE clanky, plus the chain mail clinks against the breastplate for extra added noise. 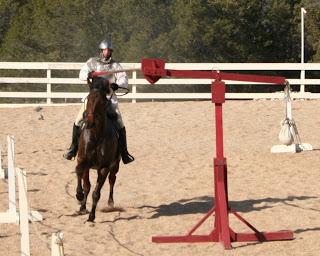 Saga did well with the extra armor, and they ended the day making canter passes at the quintain as well as "measuring passes" down the jousting lane against another horse. (A measuring pass is where you ride by each other but do not actually target the other rider.) 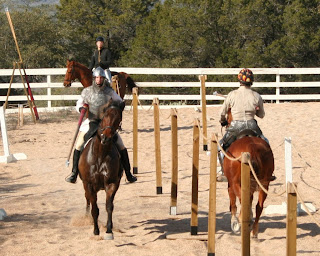 Measuring pass. Note that both riders are carrying lances but are not targeting each other.


Reddums spent the practice showing a new jouster the ropes. As an experienced jousting horse, Red's perfect for demonstrating how it's done. We usually start folks off with the quintain - it's surprisingly difficult to ride, hold a lance, and hit a target at (any) speed! 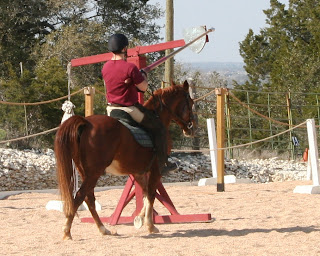 "You were supposed to hit it," says Red. Note the disgusted look on his ears.

It occurs to me that I should do a post about all the armor and equipment that we use, but here's a quick version for the purposes of translating this post.
All of the equipment that we are using is historically accurate. My husband made almost all of his armor, except for the chain mail. The armor is NOT for show - it's real armor,  designed to protect the rider from impact, as well as from flying lance shards. People have died doing this sport (King Henry II of France, anyone?), and so we make everything as safe as modern technology and metal can make it.

The next practice is this coming Sunday, if the arena dries enough. Fingers crossed!

Many thanks to AJoustersWife for all the pics in this post.
Posted by jenj at 8:59 PM