At our jousting practice yesterday, after hubby and Saga warmed up on the quintain, we had to switch out some gear to be safe for balsa jousting.

Let me explain: we do two types of jousting. The first type, which we call "foam jousting," uses an 8 foot lance with a styrofoam tip. The lance itself is comprised of a 3 foot solid wood base, a 5 foot cardboard tube (the type they roll bolts of fabric on), and finally a 2.5 foot styrofoam tip. This lance design was the first that we tried back when we started jousting, and the idea with using the cardboard tube as the body of the lance was that it would fail (crush) if the hit was too hard. It also takes very little force to break the tip of the lance, and there are no sharp splinters like a balsa tip lance produces. Therefore, the armor requirements for this type of jousting are minimal: a helm with no larger than 3/4 inch holes, body armor (an eventing vest works great for this), and protection for your throat. 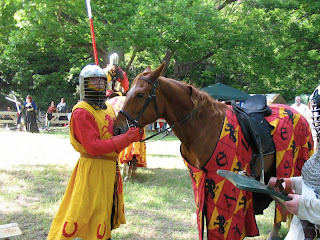 Believe it or not, that's me in there, and this getup works for foam jousting. I've got an eventing vest on under the gambeson and surcote, and the helm with the bar grille is perfectly safe.

The second type of jousting is balsa jousting. This uses a roughly 11 foot lance, including a 3 foot scored balsa wood tip (the tip is scored for easier breaking). The lance itself is solid hardwood down to ferrule where the balsa tip sockets in. It can take a significant amount of force to break these lances, and there can be sharp splinters that go flying on impact. Therefore, the armor requirements for this type of jousting are much more stringent: full body armor, arm and leg armor, double layer throat protection, groin protection (the saddle can help provide this), and a helm with openings no larger than 1/4 inch.

Here's what a balsa lance looks like. The red part is the balsa tip, the rest of it is hardwood. Photo courtesy of Historic Enterprises.

Originally we had planned to joust with foam for Saga's first hits, but we discovered that there were no foam tips to be had. In addition, the cardboard tubes on the lances designed to accept foam tips had gotten wet, and were failing. So, we decided to go ahead with balsa lances, but we had to do some armoring up.

In case you're wondering how much full jousting armor weighs, it is very much dependent on the time period your armor is and how big you are. Full plate armor (c. 1500s) weights upward of 100 lbs. Hubby's armor (c. 1380) probably weighs in around 80 lbs. R, who was riding Red and doing the hitting, and N, who was providing ground crew assistance, discuss how much R's helm weights:

Hubby had to change out his face plate. Different face plates for the same helm were done in period - after all, it was expensive to make a helm, so being able to use it for different purposes was important! 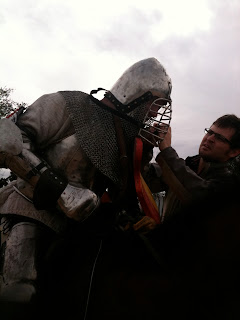 Step 1: release strap that holds the bar grille faceplate on. 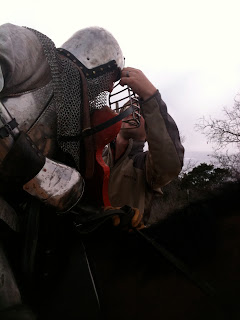 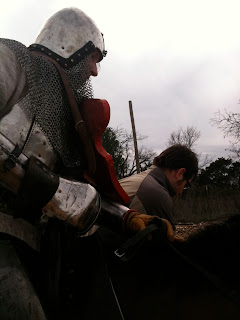 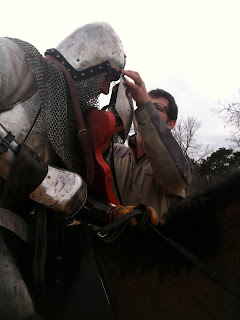 Step 3: Put the new faceplate on (this style of faceplate is called a Klappvisor, it's German) and screw on the hinge. 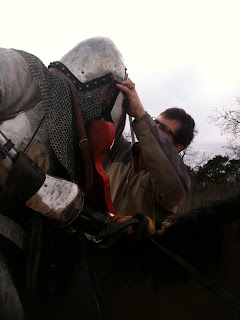 Its important to have good ground crew who know what they are doing! Note that there is also someone holding the horse while all this is going on. 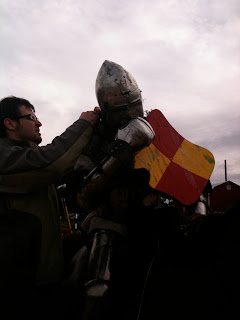 Finally, refasten the strap that holds the visor closed.

Although there are no worldwide jousting rules, the general accepted largest opening on a helm is 1/4 inch. This is to prevent any shards from the lance from penetrating the helm. And in case you're wondering, this is a real concern - the King of France died in a jousting accident when a lance shard went into his helm. Thanks, but we don't want that happening here. 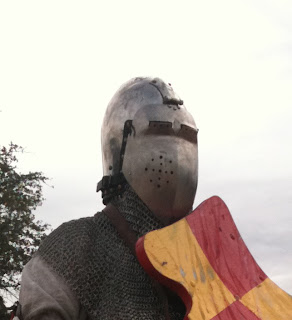 1/4 inch openings mean that those tiny eye slits are all you get to see out of. You can also start to see why the chain mail aventail attached to the helm is so critical - it protects the neck and throat region from the lance. Note the skidmarks on the shield - those are from lance tips that strike and skid off. The shield is curved to deflect blows away from the rider.

If you put your hand about halfway up the bridge of your nose, you'll have some idea of what you can see in this helm. You can't see your horse's ears, and you often can't see the tip of your lance when it hits your opponent's shield. The jousters are frequently dependent on ground crew to help turn their horses and line them up on the lane because they can't see to do it. They cannot see their hand to take a lance either - they literally put their hand out, and the ground crew must put the lance in the jouster's hand. Sometimes the horse is skittering around during this process too, since some of them get really excited to charge down the lane (Red, for example).  It's really a team effort to get the jouster off down the lane, with all equipment in working order!

But the team effort pays off... it's sort of anti-climactic, but here's how practice ended:

And because Bre makes waaaay better videos than I do, I am shamelessly posting the video she made from practice:

The full-sized video (in HD no less!) is available over at her site, G is for Greta. If you think this video is as cool as I do, please visit and tell her what you think! Thanks Bre!!!
Posted by jenj at 4:11 PM