Jousting practice cancelled due to SNOW!!!!

Yep, that's right, it snowed in parts of central Texas today. In the middle of the day, no less! It was fine at our house when we left, but shortly after we pulled into our friend's house (about 20 miles to the northwest), it started sleeting heavily. I was concerned about the condition of the roads, especially pulling a trailer, so less than 20 minutes after we arrived, we turned around and came back home. Just as we left their house, big, fat, white flakes of snow started coming down. 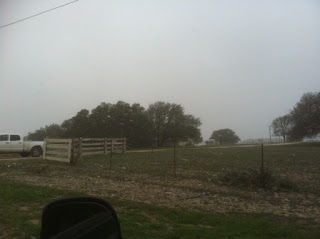 Hubby took this picture out of the window of the truck. Those blurry white blobs in the middle of the picture are snow. REALLY!

Both Bre and Fuzzypony chose today to accompany us, so since the weather was decent when we got home, we tacked the boys up and went for a ride. I think we put in 5 miles walking up and down the road, hubby in his armor. He took along a jousting lance and practice raising and lowering it to strengthen his arm, and also discovered some interesting details about where he needs to couch it (i.e. hold it under his arm) for maximum control. It was good practice, even if we weren't actually able to joust today.

I'm pretty sure Bre thinks we're crazy now (as if there was any doubt?), so I am interested to see what she will do with the pics and video she took today. Keep an eye on her blog to see!
Posted by jenj at 7:05 PM