The Plan for Saga's feet

Thank you everyone who commented about my last, rather depressed post about what Saga's foot looked like under the shoe. I appreciate all of your collective advice!

Yesterday evening I took Saga over to my neighbor-farrier and had him pull Saga's other shoe. There's no way my regular farrier could get out until next week to put the other shoe on anyway, so I figured, what the heck. We'll try barefoot again - with a few important changes - and monitor things carefully.

My vet comes out for annual stuff tomorrow, so we'll take new x-rays of his feet to see if there's been any change in sole depth. I'm guessing that there hasn't been, but it'll be good to know.

I'm changing Saga's feed from Triple Crown Light to Triple Crown 30% for Grass Hay. It's a 30% protein ration balancer that's specifically formulated for horses on mixed hay. I don't know if it'll help, but the TCL doesn't seem to be doing us any favors, so we'll try something different and see where that gets us. I'll continue on with his flax and MgO supplement, as well as the probiotics and the feed-through fly control. He also gets unmolassesed beet pulp 2x/day, which is doing a great job of helping him maintain weight without pouring a lot of grain into him.

I'm exploring another supplement option, but we'll try the TC 30% for a month and see how he's doing before tweaking anything else.

I'm also going to be MUCH more careful about booting him. He won't get boots for turnout, but the track is mostly dirt with a few small rocks here and there. I'm taking him for short walks (less than a mile) on the tarmac without boots, to help his feet wear a bit. I'm also hand-walking on soft ground. Anything longer than that, under saddle, and/or on rougher ground, and he'll get boots. I don't want to chance bruising his soles this early in the game. 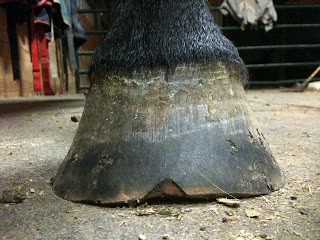 LF. Notice how much the toe has worn after just two short hand walks - less than a mile each on tarmac, plus about 1/2 mile on soft ground. 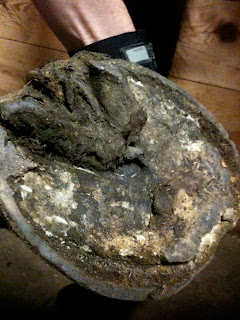 The frog is starting to shed, and the toe callus is wearing a bit. 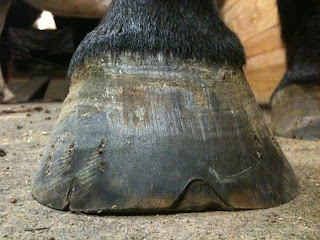 RF. It's wearing more on the outside edge than on the inside, and you can see how the coronet band is pushed up more on that side too. I'm guessing that's related... interesting. 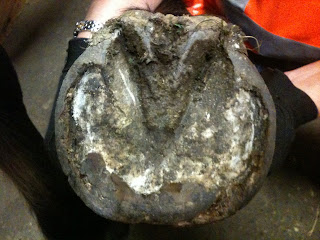 RF. It looks better overall than the LF, I think. When he was barefoot before, this foot had the better landing, although he tended to be consistently shorter on this foot on hard ground. This foot also has minor changes in the bone (de-ossification, maybe?) on the outside.

I realize from the pictures that his feet are far from ideal - long toes, bull nose, flared walls, high bars, false sole, coronet band pushed up (did I miss anything, haha?!). HOWEVER, I am not going to go crazy trimming him right now. Instead, I'm doing the hand walks, and I'm hoping to get some pea gravel for the track this weekend. I want to give his feet a chance to adjust themselves before going crazy. Right now that hoof wall is keeping his sole up off the ground, and the false sole is also affording him protection. I don't want to take that away from him all at once; I'd rather give nature a chance to figure things out a little before I help it along. I don't expect that he'll be self-trimming because I can't provide him with that sort of workload, but I do expect that his feet will adjust a little bit on their own.

So, there you have it. Fingers crossed that I can manage him better this time around. It may be he'll always need boots for anything other than the track or soft ground, or shoes for the hunting/jousting season - and I'm OK with that. I just want him comfortable without compromising his feet.
Posted by jenj at 10:59 AM