And now there are snakes!

I grew up in south Louisiana, land of venomous snakes. Water moccasins were the most common, and of course there were plenty of copperheads, and a few canebreak rattlesnakes thrown in for good measure. Despite this, I actually like snakes. I used to "babysit" my science teacher's pet king snake in middle school, and I had a rat snake for a couple of years. I also used to volunteer at the Nature and Science Center, in the herpetology area. So I can recognize venomous snakes pretty well, and I find the non-venemous ones pretty cool.

Quick note: Snakes are venomous, not poisonous. The best way to remember that is if you eat it and you die, it's poisonous. If it tries to eat you and you die, it's venomous. Also, all venomous snakes in North America, with the exception of coral snakes, are pit vipers. They have pronounced triangular heads, thick, flat bodies, and pupils that are slits instead of round (not that I recommend you getting close enough to see it!). So they are super easy to ID, even from a good distance.

So when I came across this big "stick" crawling across the road yesterday, I hopped out of the car to check it out: 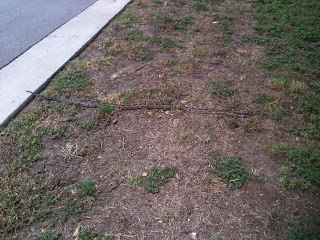 This guy is probably a Texas rat snake, or possibly a bull snake - their markings are quite similar, so it's hard to tell. However, given past experiences with this guy in our back pasture, and this guy in our shed, I'm hoping that it's the same snake and our house is part of his territory. Rat snakes eat rodents (yay!), are non-vemomous, and tend to stay away from people, so I'm really glad to have him as a neighbor. Having said that, I wouldn't try to pick him up or anything - snakes are very strong, and even the shyest wild snakes will bite in self-defense, so it's best to just let them go on their way.

Out of curiosity, now that y'all know there are scorpions AND snakes at my house, would you ever come visit if you just happened to be in the area?

Maybe I should blog about cute bunnies instead?
Posted by jenj at 10:07 PM