I got a ton of pictures from yesterday afternoon/evening, but they are really awful since I used my iPhone and we were inside. Fuzzypony did manage to get a few decent videos of Saga on his jousting runs, so I'll share those.

Red did not have a good day. Since he's the resident jousting expert on our crew, he's often the first choice as go-to pony. I think he got a little overworked and fed up, and ended up dumping his rider. I found out later that he had been saddled for over four hours when it happened, so I really cannot blame him. I had no idea that he was being ridden yesterday, so the responsible parties had a good talking-to. That's one of the things I hate most about loaning your horses out - even if you know the riders and they're good, they don't always handle your horses the way you want them to be handled. Fortunately, hubby and Red had the opportunity to take a lesson this morning, and apparently Red was very good.

Cash was once again the star participant in a class on how to maneuver your horse in mounted combat. He cheerfully sidepassed, backed, and spun around all the other horse, neatly ducking and evading everyone. 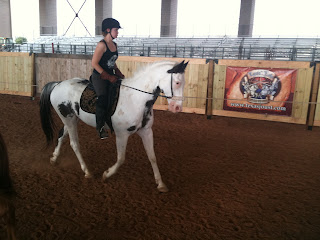 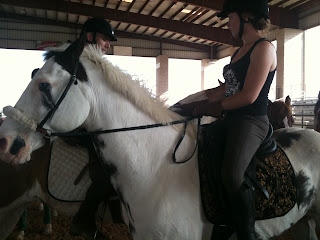 Demonstrating how to take wrestle your opponent off their horse. First, sidle up to them... 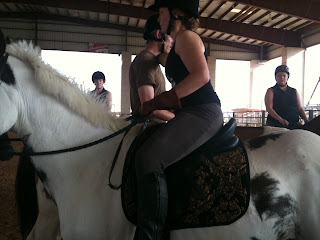 Next, throw your arm out to clothesline them... 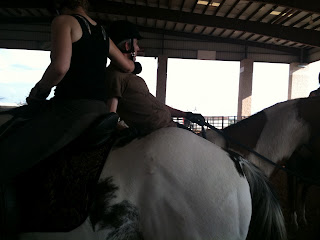 And tidily knock them off balance!

Later in the evening was the first real joust practice. Before the performance joust this weekend, where we hope to have a large audience, we try to pair everyone against everyone else for at least one run. That way we test out the procession, the AV equipment, pairings, riders, armor, etc. There is SO MUCH that has to happen to pull this off smoothly, so practice is good. 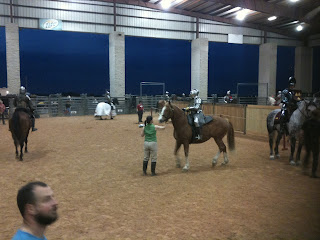 This picture doesn't quite do the scene justice, but there are about a dozen mounted, armored riders in this pic, taken while folks were warming up in the arena. It was a madhouse. 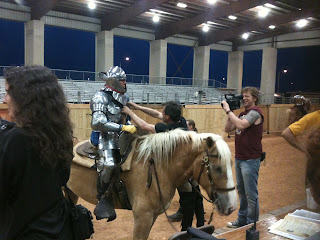 A French knight gets some help armoring, while the camera crew records the moment. 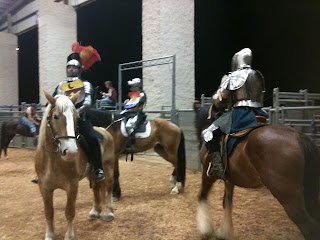 Knights waiting around for their runs. Most of the horses are drafts, or draft crosses.

Hubby and Saga did three practice runs last night, against three different opponents. We didn't get video of the first run, but here are the second two.

There were no hits in this pass, but that turned out to be a good thing. Hubby's opponent had been having issues getting her horse down the lane, so a good run without a spooky hit was OK.


The last pass was AMAZING. Smooth start, solid run down the lane, great hits by each jouster. Note the fistpump at the end of the run! That's the way it's supposed to be.
Posted by jenj at 10:06 AM